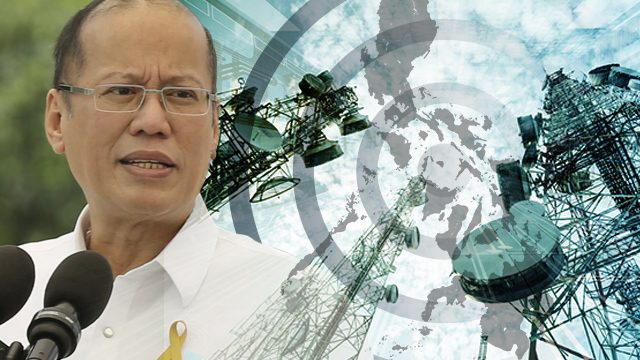 Facebook Twitter Copy URL
Copied
By June 9, President Benigno Aquino III will have to decide whether he will veto or sign the bill creating the Department of Information and Communications Technology (DICT)

MANILA, Philippines – A bill that will create a Department of Information and Communications Technology (DICT) has finally landed on President Benigno Aquino III’s desk for signing, a little over a month before his administration ends.

“According to Presidential Legislative Liaison Office, DICT bill was transmitted to Malacañan on May 10,” Communications Secretary Herminio Coloma Jr told Rappler in a text message on Monday, May 16.

Coloma said Aquino has “a 30-day review period” to decide on whether he will veto or sign the bill.

Should Aquino sign the bill into law, its implementing rules and regulations should be released in 6 months’ time.

If the President does not give his decision within 30 days, the bill will lapse into law, as stated under Article VI, Section 27 (1) of the 1987 Constitution.

Senate Bill No. 2686 and House Bill No. 6198 were passed on 3rd and final reading in Congress last year.

The Senate adopted House Bill No. 6198 in December 2015, erasing the need for a bicameral conference committee to iron out any difference between versions.

The principal sponsor of the DICT bill remains optimistic that Aquino will sign the measure into law.

“I think the Palace is searching for the best day for a signing ceremony. It’s a matter of scheduling. Or they may want it signed before he gives a major speech so he can announce it there for maximum impact,” Senator Ralph Recto said in a statement.

Recto added that one of the benefits of the bill would be a lean bureaucracy with a “small but smart workforce.” (READ: New Internet speed minimum throwback to ’90s?)

“In fact, there will be savings in the merger of the offices. Para makatipid (To save up), we limited the number of undersecretaries, to cite an example, and the creation of regional offices was not made mandatory. This will not burn a huge hole in the taxpayer’s pocket,” Recto said.

Despite its “small budget footprint,” the senator claimed the DICT will be a “powerful main server” that would spur ICT development, institutionalize e-government, and manage the country’s ICT environment.

Sean Paul Agapito, associate market analyst at International Data Corporation, said the establishment of the DICT is important if the government wants to secure ICT growth in the coming years.

“If created, the DICT will be the primary government entity to plan, promote, and help develop the country’s ICT sector and address issues concerning Internet connectivity, communications services, data privacy, cybersecurity, and cybercrime – functions that are currently divided among several disparate agencies,” he added.

Agapito said ICT is among the most profitable divisions of the Philippine economy. It is projected to contribute $50 billion in revenues in 2016.

The Philippine Business Groups and Joint Foreign Chambers (PBG-JFC) also supported the DICT bill, saying it would help position the country as a world leader in the growing global ICT market.

“The Philippines is already a world leader in business process management, employing some one million young people in well-paying jobs,” PBG-JFC said in a statement.

In creating the DICT, the Philippines would join around 150 countries that have a dedicated department for ICT.

Under the proposed DICT, there will be an attached Cybercrime Investigation and Coordination Center, Recto said.

The DICT will formulate the National Cybersecurity Plan and form the National Computer Emergency Response Team, “our IT Special Action Forces,” the senator added.

For Recto, broadband has become the 3rd utility, after power and water.

“Therefore, we need an agency that will address ICT infrastructure, ICT affordability, ICT usage – 3 areas we score low,” he said.

Despite having one of the slowest Internet speeds in the world, the Philippines hosts one of the largest numbers of cellphone and Internet users globally. – Rappler.com