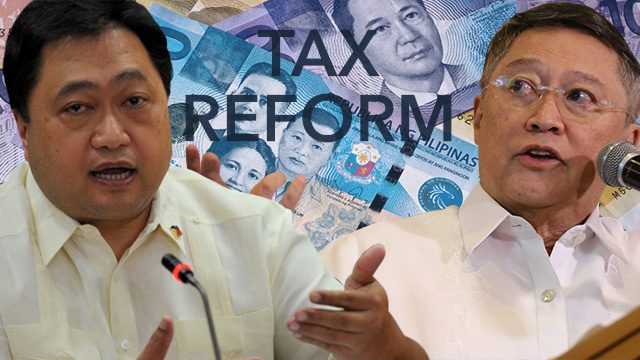 MANILA, Philippines – Outgoing Finance Secretary Cesar Purisima will pass on to his successor Carlos Dominguez III a set of tax reform recommendations that are estimated to generate P164.5 billion to P351 billion in revenues for the first year of implementation.

Some of these recommendations include lowering the top tax rate within 6 years to 25% from 30%, increasing value-added tax to 14% from 12%, and indexing excise tax on gas, diesel, and other oil products to inflation.

The proposal also includes repealing bank secrecy for the Bureau of Internal Revenue, rationalizing fiscal incentives, and granting an all-in income tax exemption of P1 million to all wage earners.

Purisima has long said “it’s high time” to reform the country’s tax system to make the economy more competitive and more inviting than those of its neighbors. “In the past few years, the DOF engaged in a series of studies and consultations with academic experts as well as multilateral and bilateral institutions on our commitment to genuine tax reform – one done in a holistic manner and ideally at a time when electoral pressures do not threaten our long-term needs for short-term gains,” Purisima said in a statement on Thursday, May 26.

Purisima met with Dominguez on Friday, May 20, to implement a smooth transition of power on June 30. (READ: Purisima, Dominguez prepare for transition)

The DOF’s comprehensive tax reform study will be part of the transition documents Purisima will hand over to Dominguez.

“As we transition towards a new administration, we pass on the elements of this study for the new leadership to consider taking forward. We hope the various areas covered by our initial work sparks public discourse on financing our future,” the DOF said.

According to the DOF, reducing income tax brackets to 4 from 7 for wage earners and lowering top tax rate to 25% from 32% in 6 years “may make our economy more competitive in light of Association of Southeast Asian Nations (ASEAN) integration.

This can be coupled with the lowering of the top tax rate for self-employed and professionals to 25% from 32% within 5 years, while removing other personal and additional deductions and harmonizing treatment with corporate taxpayers, DOF said.

The department also proposes to grant all-in income tax exemption of P1 million to all wage earners, as this “will not only give relief to a majority of Filipinos – it is above all, feasible from a tax administration standpoint.”

According to DOF, this move will exempt 11 million out of 12 million wage earners from paying taxes, leaving only 4% of wage earners to the BIR for better administrative focus.

This proposal will cost the government P158 billion to P222 billion in foregone revenues, the department said.

The department said this would only be feasible if coupled with the rationalization of 224 laws that make up the country’s overly generous regime for fiscal incentives.

To safeguard the country’s fiscal position, the DOF said the staggered lowering can be based on a tax-to-GDP safety mechanism. (READ: Why PH has 2nd highest income tax in ASEAN) “If the tax-to-GDP does not hit the level specified, the lowering of tax rates may be postponed to the year when the level is reached,” DOF said.

The government will earn about P132 billion should it index excise taxes on gas, diesel, and other oil products to inflation. This have not been adjusted since 1997, the DOF said, citing several studies.

This is to make the most of the low oil price environment, the department DOF  in a copy of the presentation of several tax reform studies.

According to the presentation, regular gasoline can be taxed at P10 per liter, diesel at P6 per liter, while increasing rates by 4% every year moving forward.

“This oil tax reform may also cover coal and other petroleum products to internalize the economic costs of climate change. This oil excise reform will generate P132 billion,” DOF said.

To cushion the foregone revenues, DOF said the next administration should consider increasing the VAT rate to 12% from 14%, and expanding the VAT base by removing all exemptions for those in agriculture, health, banks, and education.

DOF said the scrapped exemptions could be replaced with a direct subsidy mechanism that will pass through the budget process. This means “relief is given to those who need them, and expenditures made more directed and transparent.”

The department cited VAT exemptions for senior citizens or persons with disabilities as an example.

According to the DOF, this can be transformed into budgetary support or subsidies, like conditional cash transfer programs, wherein the impact of programs is more targeted and direct.

DOF said removing all zero-rating for VAT except direct exports is also an “ideal” option.

The department added this proposal will generate P162 billion in revenues.

The Philippines and Lebanon are the only countries in the world where tax evasion is not a predicate crime to money laundering.t

“The rule is so strict that the Anti-Money Laundering Council is not allowed to intervene in Bureau of Internal Revenue operations,” the DOF said.

Although the country has improved its tax administration capacity and laid down the institutional groundwork for easier tax payments, a huge challenge in the Philippines’ tax administration is its tax base which “remains very narrow,” DOF added.

According to the department, only 2,287 companies make up around one-half of all government revenues.

DOF said the Philippines has improved its enforcement capacity by filing more than 420 tax evasion cases and 200 smuggling cases worth P100 billion in duties and taxes over the past 6 years.

But the institutional capacity of revenue generating agenciesis “severely limited by laws that weaken their effectiveness to collect and ability to prosecute criminals,” the department said.

“We are likewise convinced that a one-time tax amnesty program is warranted to generate widespread support, except for those tax cases pending in court,” it said.

DOF said the organizational capacity of the Bureau of Internal Revenue and the Bureau of Customs to collect must also be improved dramatically. Among the steps to achieving this, it said, is to remove the agencies from the Salary Standardization Law “to attract staff with competence and integrity and to discourage corrupt practice.”

“A genuine tax reform package must be revenue-positive to correct historical underinvestment in our people. Eroding revenue without making up for lost ground in fiscal space is unsustainable, threatening our ability to deliver public goods and services in pursuit of inclusive growth,” the DOF said. – Rappler.com