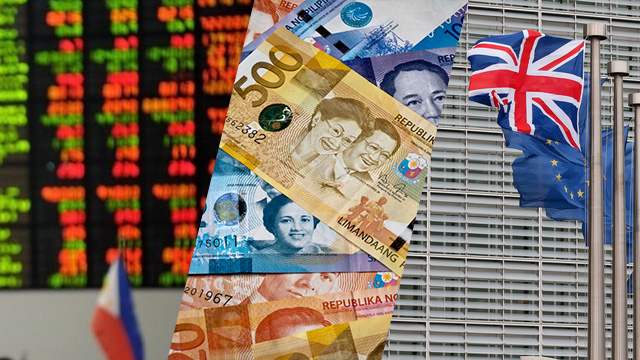 MANILA, Philippines – Philippine stocks declined and the peso depreciated against the dollar on Friday, June 24, as investors turned risk-averse on the decision for Britain to leave the European Union (EU).

“This is mainly because investors were taken by surprise. They were expecting that it would remain with EU. Decline is simply because of risk aversion by investors both local and international,” Alexander Adrian Tiu, senior equity analyst at AB Capital Securities Incorporated, said in a phone interview. (READ: PH warned: Brexit will affect all countries)

“[T]his was not expected by the markets. The Brexit decision brings us to uncharted territories as most other EU countries may be embolden to leave as well,” Mapa said in an e-mail.

“Peso dropped on risk off sentiment, while foreign selling in the PSEi dragged on Peso further,” he added.

“Markets were down because people start to panic about the impact of British exit to us. They saw UK pound collapsed to its lowest level since 1985. This is just a knee-jerk effect,” Harry Liu, chief of brokerage firm Summit Securities Incorporated, said in a phone interview.

“But the Brexit should not hurt us so much. It will only hurt us in terms of investments in Europe. We import more from the UK, so it would be cheaper. I think it would have a drastic effect on us,” Liu added.

The Bangko Sentral ng Pilipinas (BSP) gave assurances that strong macroeconomic fundamentals and sufficient buffers would help the Philippines survive the decision of the United Kingdom to leave the 28-nation European Union.

BSP Governor Amando Tetangco Jr said in a text message to reporters that monetary authorities are ready to act swiftly to minimize the impact of Brexit on the domestic financial markets.

“BSP is ready to provide liquidity to our market as needed. But we don’t see any need to change stance of monetary policy at the moment,” he said.

The BSP chief explained the decision of Britain to leave EU would result to volatile markets as investors shift to safe haven currencies such as the US dollar and Japanese yen.

“As expected, the US dollar and yen benefited as safe haven currencies. While regional currencies are down, the peso remained in the middle of the pack,” Tetangco said.

“We can expect more volatility in domestic markets in the near term. Even as the direct Philippine exposure to UK is relatively small, we will watch the impact on us via contagion from moves in the US dollar,” Tetangco added.

Britons voted to leave EU, a move that could profoundly reshape the economy of Europe. Economists believe an EU exit would hurt the British economy.

BSP Deputy Governor Diwa Guinigundo said the country’s sustained economic growth for the past 69 quarters since 1999 as well as the healthy balance of payments (BOP) position and higher gross international reserves (GIR) would cushion the impact of the results of the referendum on the domestic foreign exchange market.

The country’s gross domestic product (GDP) growth accelerated to 6.9% making the Philippines the fastest growing economy in Asia in the first quarter of the year, from the revised 6.5% in the fourth quarter of last year.

Economic managers penciled a GDP growth of 6.8% to 7.8% for this year.

“Should safe haven mentality prevail over the investor, I think we have sufficient strong macroeconomic fundamentals to provide them with some second thoughts about leaving the domestic financial markets,” Guinigundo said.

Amid the sustained economic expansion, he added the country’s inflation environment remains benign and is expected to remain within the mid point this year and below the mid point of the 2-4% target range. – Rappler.com