Oct 5, 2016 11:30 AM PHT
Agence France-Presse
Facebook Twitter Copy URL
Copied
The International Monetary Fund cuts its economic outlook for the United States, but upgrades those for Japan and the eurozone 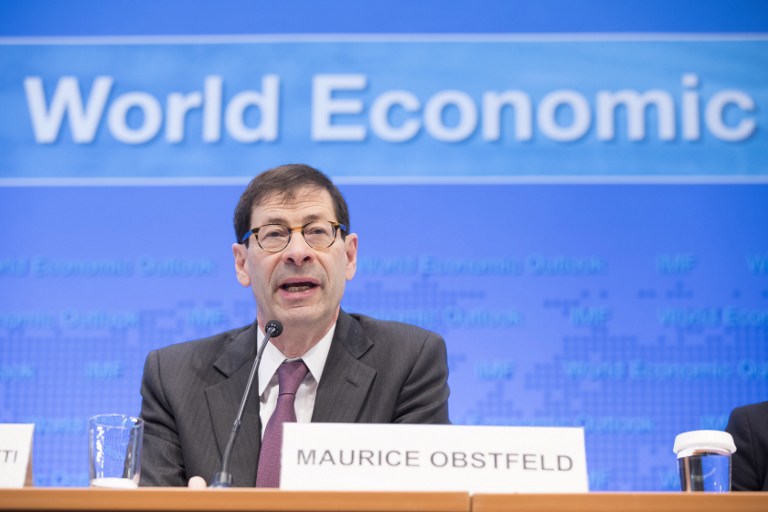 In its new World Economic Outlook report, the global crisis lender also sounded an alarm over what it called a “dangerous” credit binge in China.

With Britain voting this year to secede from the European Union and US presidential candidates disfavoring open borders, the IMF said populist politics imperiled trade liberalization and economic growth.

The Fund notably cut its outlook for the United States, the world’s largest economy, but upgraded those for Japan and the eurozone.

It also downgraded forecasts both for growth in global trade volume and for advanced economies’ output, saying that prospects for richer countries had darkened this year, in part due to the protectionist talk.

“Turning back the clock on trade can only deepen and prolong the world economy’s current doldrums.”

Global GDP is expected to grow this year by 3.1% before rising to 3.4% next year, estimates that are unchanged from July.

“Taken as a whole, the world economy has moved sideways,” Obstfeld said in remarks accompanying the new forecast.

He said that “sub-par growth” was stirring negative economic and political forces around the world.

The IMF downgraded its outlook for advanced economies this year by 0.2 percentage points to 1.6% but raised it slightly for emerging and developing economies to 4.2%. Next year’s forecasts were unchanged.

“Over the medium term, while we expect that advanced economies will continue along a disappointingly low growth path, emerging market and developing economies should accelerate,” said Obstfeld.

The IMF said global growth still faces notable uncertainties, such as further economic shocks in China, a continued fall in commodity prices, and the sudden imposition of new trade barriers.

“Geopolitical tensions could flare up, adding to the humanitarian crises already afoot in the Middle East and Africa,” the report said.

Following a lackluster second quarter, the United States suffered the report’s sharpest downward revision of 0.6 percentage points, with growth now foreseen at 1.6% this year – slower than the eurozone – and 1.8% in 2017.

Japan was a surprise bright spot, however, with forecasts revised upward. The Japanese economy is now due to grow by 0.5% and 0.6% this year and next.

The tone of the report was “decidedly gloomy,” according to the research firm Capital Economics, which said that IMF forecasts would probably be lowered even further over the coming year.

“For a start, the Fund seems to be too upbeat on the prospects for the euro-zone.”

In his remarks, Obstfeld pointedly warned of the “gathering political fallout” of a low-growth era in wealthy countries where income distribution has skewed “sharply towards the highest earners.”

“The result in some richer countries has been a political movement that blames globalization for all woes and seeks somehow to wall off the economy from global trends rather than engage cooperatively with foreign nations,” he said.

Contractions in Russia and Brazil are also due to end, while prospects for China were unchanged, with the world’s second largest economy expected to grow a robust 6.6% this year and 6.2% next year.

But the IMF report cited an alarming growth in private sector credit in China, propping up state enterprises to postpone the recording of losses – risking an “eventual disruptive adjustment.”

Obstfeld meanwhile pushed back against assertions that the IMF had been excessively alarmist in warning of the fallout of Britain’s vote to leave the European Union.

The Fund said earlier this year that the Brexit vote could cause a recession in the UK.

Tuesday’s forecasts instead revised British growth upwards by 0.1 percentage points for 2016, to 1.8%. But it further downgraded the 2017 outlook to 1.1%.

Obstfeld said British markets had reacted more favorably than anticipated but that current circumstances were within the range of possibilities the IMF had initially published.