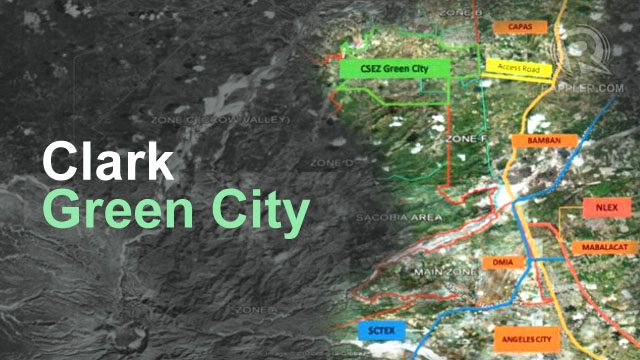 Clark Green City is located in the Clark Special Economic Zone. Pursuant to Republic Act No. 9400, duly registered business enterprises that operate in the special economic zone shall be entitled to the same tax and duty incentives as provided for under Republic Act No. 7916.

Among the applicable fiscal incentives, as specified by the BCDA, are:

The non-fiscal incentives include:

Named Clark Green City, the first phase of the development is estimated at P59 billion ($13.48 billion). BCDA earlier said it was preparing the terms of reference for the bidding of 1,300 hectares out of the 9,450 hectares of the development, following the approval of the master plan by the National Economic and Development Authority (NEDA) board chaired by President Benigno Aquino III.

The bidding is set for the third quarter of this year.

It said the development project provides an opportunity for a 100% foreign owned company to invest since the entire area is a special economic zone. The first phase of the development will be shouldered mainly by international and local private sector proponents.

Clark Green City is near the Clark International Airport and 30 minutes from the deep-sea port of the Subic Bay Freeport Zone via the Subic-Clark-Tarlac Expressway (SCTEX).

Based on the Clark Green City District Plan, the new city will have 5 districts: government, central business, academic, agri-forestry research and development, and wellness and eco-tourism.

BCDA said Clark Green City will be disaster-resilient in light of the ill-effects of climate change.

The World Bank recently expressed its support for the project and will assist the BCDA in the area of innovation and sustainable green development.

The BCDA also recently signed a memorandum of understanding (MOU) with the University of the Philippines for the establishment of a global campus for the state university and serve as the anchor for the city’s “Brain Capital.”  The UP global campus is envisioned to spur innovation, technology, research and development, and human capital, Casanova said.

The BCDA also began the process of building the country’s most modern food processing hub and cold storage facilities to ensure food security and access of Philippine agricultural products to the global food market.

The 3-page resolution directed the BCDA to coordinate with other government agencies and different local government units for appropriate strategies, plans, and timetable to attain the targets set forth in the plan.

At full development, Clark Green City is estimated to contribute P1.57 trillion ($358.61 billion) per year to the economy and will generate 925,000 jobs. – Rappler.com