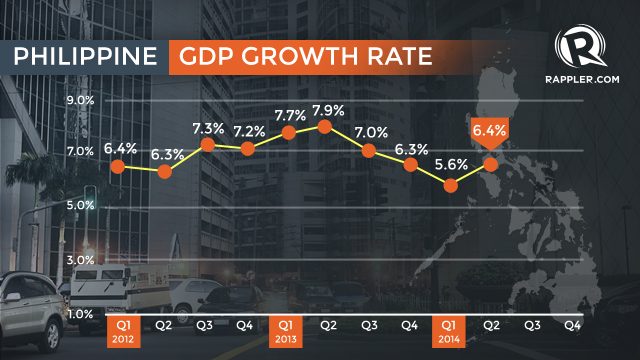 Facebook Twitter Copy URL
Copied
The government targets a 6.9% growth in the 2nd half of 2014 to hit the full-year growth aim

MANILA, Philippines – Hitting the 2014 economic growth target of 6.5% to 7.5% is still possible for the Philippines, if historical performance will repeat itself, the country’s chief economic planner said on Tuesday, September 30.

“We’re working to achieve the target. We have grown far above 7% in many quarters in the past, so that’s possible this time,” National Economic and Development Authority (NEDA) Director General Arsenio Balisacan said on sidelines of the economic briefing “Philippines: Shaping our Future.”

In the first semester, the Philippine economy grew by 6%, slower than the 7.8% expansion in the same period last year.

In the 2nd quarter this year, the Philippine economy accelerated to 6.4% – the second fastest in Asia. The private sector took the lead as the economy recovered from a modest expansion of 5.6% in the 1st quarter, which was partly due to the impact of devastating natural disasters.

Balisacan said the economic growth in the 3rd quarter is crucial and will signal whether the full-year target needs to be revisited.

The Philippine economy grew 6.8% in 2012 and 7.2% in 2013, but there are concerns about the sustainability of such strong numbers.

“I think that the impact of the truck ban [on imports] has already eased. We hope that the [imports] numbers will be much better by August,” Balisacan said. (READ: Port industry players: Freeze truck ban)

The damage sustained from typhoons this year is, so far, not as severe as what the country experienced in 2013, and that hopefully, the calamities, like the impending eruption of Mt. Mayon in Albay, would not impact the economic growth for the year, Balisacan said.

Balisacan added that as infrastructure development is accelerated, the government shall continue to implement strategies to improve the country’s business climate.