Philippine economy slows down to 5.3% in Q3 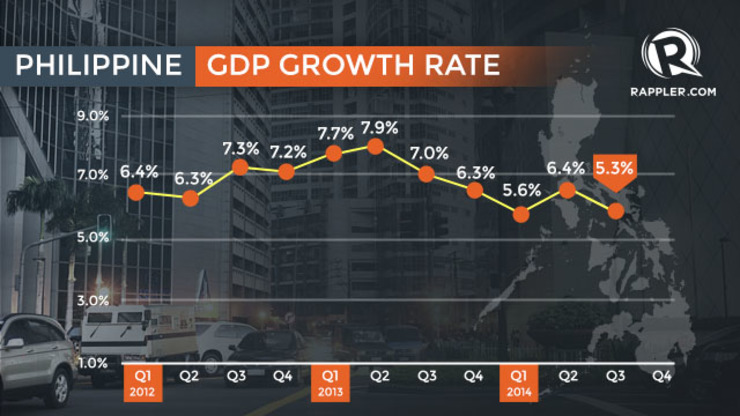 MANILA, Philippines – Expectations were shattered as the country’s gross domestic product (GDP) growth for the third quarter slowed down to 5.3% – lower than the second quarter’s 6.4% gain and the 7% growth in the same period in 2013.

With the lower GDP growth, hitting the lower range of the 6.5% to 7.5% full-year target would be a challenge, said National Economic and Development Authority Director General Arsenio M. Balisacan who announced the latest figures on Thursday, November 27.

GDP is the monetary value of final goods and services produced by a country, thus it is a measure of economic performance.

The third quarter Philippine GDP growth is at its slowest pace since 2011, and lower than the 6.4% consensus forecast in a Bloomberg survey.

The Philippine Stock Exchange Index (PSEi) dropped 0.9% as of 10:17 am Manila time, Bloomberg reported, following the news of weak GDP growth. The PSEi was riding on an 18-month high on November 26 at 0.96%.

In September, the NEDA chief expressed confidence that the Philippines can hit its 2014 economic growth target of 6.5% to 7.5% – if historical performance was to repeat itself.

Balisacan also said then that economic growth in the third quarter is crucial and will signal whether the full-year target needs to be revisited.

Considering this quarter’s performance, the GDP growth in the first 3 quarters of 2014 is estimated at 5.8%.

“Admittedly, even hitting the low end of the target growth rate for the year would pose a big challenge,” Balisacan conceded.

The NEDA chief said that at least 8.2% is needed in the fourth quarter and the Development Budget Coordination Committee (DBCC) “will brainstorm intensively on how we can come as close to this figure as possible.”

But Finance Secretary Cesar V. Purisima said the third quarter GDP growth of 5.3% puts the Philippine economy on a record of 11 straight quarters of above 5%-growth and  “among the fastest growing economies in Asia, reflecting increasing resiliency as government seeks to improve spending and buttress against the effects of climate change and disasters.”

“This makes for 63 straight quarters of positive growth since the 1997 Asian financial crisis, and is in keeping with the 6% average quarterly growth rate in the Aquino administration,” Purisima said in a statement.

“The private sector treading a more stable upward trajectory, government adjusting to new spending protocols, and then, the lingering negative impact of supertyphoon Yolanda and other calamities,” Balisacan said.

But deceleration in sub-sectors such as financial intermediation and the contractions in agriculture and public administration “tempered the pace of growth,” Balisacan noted.

While it decelerated in the third quarter, the services sector remained the main driver of GDP growth at 5.4%. The services sector has been on the downward trend since the first quarter of 2014, National Statistician Lisa Grace Bersales reported.

The services sector gave the highest contribution to GDP growth with 3.1 ppts, while the industry sector slowed down to 7.6% – slightly lower than the previous year’s 7.7% and previous quarter’s growth of 7.9%. It contributed 2.4 ppts to GDP growth, Bersales added.

The agriculture sector declined by 2.7% – the lowest since the last quarter of 2009. This third quarter loss also pulled down the GDP growth by -0.3 percentage point, the national statistician noted.

On the demand side, the growth was fuelled by net exports, 2.1 ppts; private construction, 1.1 ppts; and food and non-alcoholic beverages, 1.0 ppts, Balisacan said.

“However, the contraction in government and public construction slowed down total demand,” the NEDA chief pointed out.

Per capita GDP also slowed down to 3.5%; while per capita GNI decelerated to 3.1%; and per capita Household Final Consumption Expenditure (HFCE) went down to 3.4% on the back of projected population reaching 100.1 million.

ING Bank senior economist Joey Cuyegkeng said two days prior to the GDP third quarter report that “underspending of government is one cause of slower growth.”

The government has been criticized for spending below program despite the need to accelerate disbursements to support reconstruction and rehabilitation in typhoon-affected areas.

As the government may disclose this week its October fiscal performance, including spending, Cuyegkeng said they are expecting a P12-billion ($267.03 million) deficit in October on the back of a 12% growth in government spending.

Balisacan said they expect the private sector to maintain a robust performance; government to have adjusted to the new protocols; along with the accelerated reconstruction assistance in the supertyphoon Yolanda-affected areas.

Among the lessons learned from the third quarter economic performance is that agencies should be adequately prepared and capacitated to comply with new protocols.

“And improve our resilience against disasters – through better preparedness, through adaptation, through adequate social protection and through having a faster response mechanism,” Balisacan said.

Purisima said the 5.3% growth “highlights some challenges which we have the ability to address.”

“Government spending can improve, and we have ample fiscal space to increase investments in our infrastructure and our people, through education, health, and social services,” the finance chief said.

Like Balisacan, Purisima also expressed optimism that the economy will further pick up as the government strengthens its economic and good governance reforms at the tail-end of the Aquino administration.

“We have a strong external position, and we maintain strong macroeconomic fundamentals that will ensure we will continue on our positive growth trajectory,” Purisima said. – Rappler.com