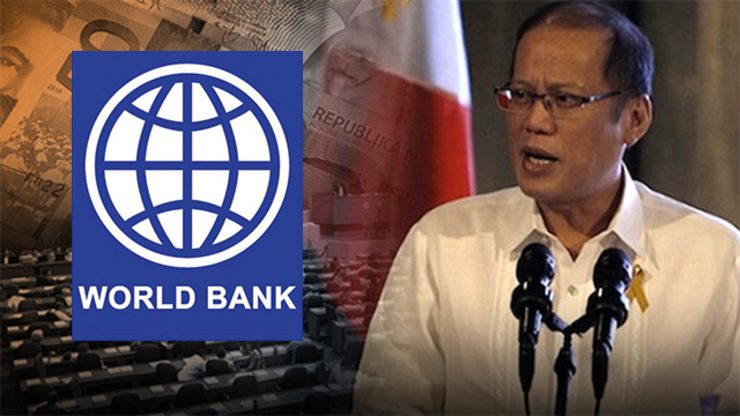 MANILA, Philippines – The World Bank (WB) downgraded the Philippines’ annual growth outlook for 2015, despite a helpful global oil price plunge, which the multilateral lending agency said is an advantage for developing countries.

For 2014, the country’s gross domestic product (GDP) was estimated to hit 6%, lower than the WB’s earlier calculation of 6.4%.

This is because government spent less in the third quarter of 2014, according to Karl Kendrik Chua, WB’s senior economist in the Philippines.

The government’s limited opportunities to raise spending in the final quarter of 2014 was also attributed to the lending agency’s reduced forecast, Chua added.

WB’s computations are yet to be proven as government only has 2014’s third quarter GDP as its latest statistics.

In the said quarter, the Philippines’ GDP slowed down to 5.3%, its slowest pace since 2011.

Analysts blamed the decline on government underspending. In November 2014, ING Bank senior economist Joey Cuyegkeng said “underspending is one cause of slower growth.”

The Aquino administration was criticized for spending below program despite the need to accelerate disbursements to support reconstruction and rehabilitation in typhoon-affected areas.

According to Chua, the Philippines is expected to rebound this year and in 2016 with an annual estimated growth of 6.5%.

The figure, however, is a revision less than the WB’s earlier projection of 6.7%.

Similar to the 2014 GDP prospect, Chua said their estimate for this year’s growth will rely on how the government will disburse its programmed budget.

“Revised growth projections are primarily contingent on the ability of the government to fully implement the 2015 budget and the Yolanda master plan as intended,” he said.

President Benigno Aquino III signed on December 23, 2014 the P2.606-trillion budget ($58.39 billion) for this year, of which P10 billion ($224.05 million) has been set aside to reconstruct communities affected by Super Typhoon Yolanda (international name: Haiyan).

The WB said the Philippines could hit more than 6% growth in 2015 with a positive consumer and business outlook, stronger foreign direct investments inflows (FDIs), and rapidly falling oil prices.

Lower oil prices, for instance, will play a crucial role for developing countries like the Philippines.

“Much lower prices can boost manufacturing and consumption. In fact, the Philippines is one of the biggest beneficiaries of falling oil prices in the world,” Chua explained.

Stronger consumer confidence in 2015 will be attributed to food inflation, which the government had tamed in 2014 by importing an adequate amount to meet the country’s demand.

“These, together with monetary policy tightening in the first 9 months of the year, resulted in slower inflation, which averaged 4.1% in 2014, well within the Central Bank target of 3% to 5%,” he said. 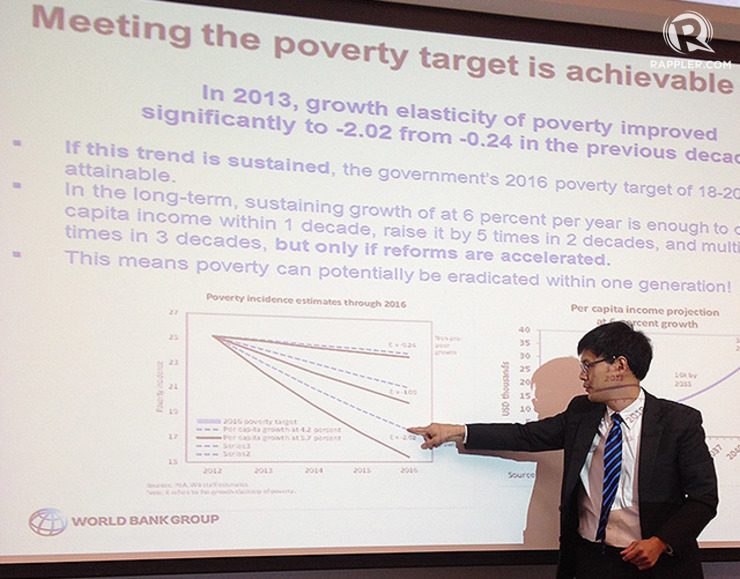 Despite lowered expectations, the WB commended the country’s ambition to achieve inclusive growth over a number of indicators.

First, it noted over a million jobs created between October 2013 and 2014, citing the latest labor force survey.

Unemployment rate in the country also continued to fall, with 1.04 million people who found new jobs as of October 2014 government statistics.

“If this trend is sustained, the government’s 2016 poverty target of 18% to 20% is attainable,” said Rogier van den Brink, WB Philippines’ lead economist.

According to the WB, 2013’s growth elasticity of poverty stood at -2.02 from -0.24 in the previous decade. “This means poverty alleviation is possible,” said Brink.

WB’s outlook for the Philippines improved after the Asian Development Bank (ADB) posed a difficult question in September 2014: how can the robust economy give back to the jobless and poor?

“We’re not doing as bad as we think,” said Chua.

The United Nations Economic and Social Commission for Asia and the Pacific (UN ESCAP) also slashed its 2014 growth forecast for the country to 6% from its August 2014 projection of 6.7%.

In 2015, growth is expected to reach or exceed 6% for the fourth consecutive year, propelled by private consumption and a revival in investment in recent years, UN ESCAP added.

In 2014, private consumption continued to drive the economy, benefiting from employment growth in services and construction, as well as from steady overseas workers’ remittances.

Public spending, after slowing in 2014 following legislative challenges, is expected to accelerate again and support growth.

Prices are also projected to be more stable in 2015 and not drag domestic demand.

“Keeping up the recent revival in manufacturing activities, including through increased public infrastructure outlays and effective industry roadmaps, will be important for sustained, job-creating economic growth in the coming years,” UN ESCAP said in its 2014 yearend update.