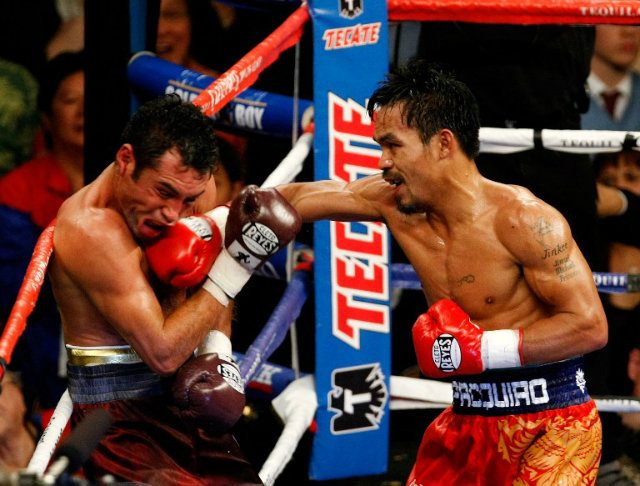 MANILA, Philippines – “To inspire” world boxing champion Manny Pacquiao,  a senator said he will file a bill granting special tax exemption to the Filipino boxer in his earnings from the highly anticipated May 2 fight with Floyd Mayweather Jr.

Senator Aquilino Pimentel III said in a statement on Friday, February 27, that the tax exemption would be offset by the perpetually extended “helping hand” of Pacquaio to less fortunate people in the country.

“During his training, let us inspire Manny by way of passing a special tax exemption act for this particular fight. Anyway we are not blind that a substantial part of his boxing proceeds goes to the people through Manny’s helping hand,” said Pimentel.

He further explained: “Manny being a Filipino promotes the Philippines….The marketing value for the country is priceless.”

“Manny is now part of our history and of world sports history. Let’s give him this tax incentive in recognition to his invaluable efforts to promote boxing and the country around the world,” said Pimentel.

Thus, Pacquiao needs all the support and inspiration he could get during his training preparations for the fight that took more than 5 years in the making, he said.

In August 2014, Pacquiao asked the Supreme Court (SC) to reverse a court requirement for him to post bond to stop the Bureau of Internal Revenue (BIR) from collecting his allegedly unpaid taxes.

The resolution granted Pacquiao’s plea to stop the BIR from collecting his allegedly unpaid taxes from 2008 to 2009.

Pacquiao, however, wanted to do away with the bond requirement.

In August  2014, the SC ordered a temporary halt in the BIR’s issuance and execution of any warrant of distraint and/or levy and garnishment against Pacquiao’s assets. Such warrant allows the government to take Pacquiao’s assets until the payment of his alleged obligation to the state.

The court also temporarily disallowed BIR “from attempting to collect any tax on the basis of the deficiency income tax and value added tax (VAT) assessments against petitioners for the years 2008 and 2009.”

In his Macau fight in November 2014 where he beat Chris Algieri, questions surfaced if the fight, on the part of Pacquiao, was taxable.

Rappler’s tax guru, Mon Abrea, previously wrote that as a resident citizen, Pacquiao would have to declare and to pay 32% income tax on all his earnings inside and outside the country. However, the taxes collected in Macau can be used as tax credit to avoid double taxation.

At Macau’s tax rate of 12%, versus the Philippines’ top tax rate at 32% or an effective rate of 19% under optional standard deduction (OSD), Pacquiao will still have to pay additional 7% taxes on his winnings from his Macau fight.

As for Pimentel’s proposal, to date, there is no provision in the country’s tax code that exempts modern-day heroes including our “Pambansang Kamao.”

Otherwise, everyone will claim exemption from income taxes as modern-day heroes like our teachers, policemen, and the likes, Abrea wrote. – Rappler.com