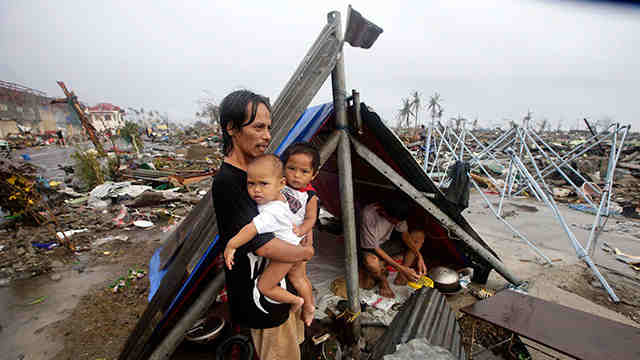 MANILA, Philippines – Steep food prices and Super Typhoon Yolanda (Haiyan) negated the higher per capita income in the country in the first half of 2014, as the poverty incidence among Filipinos rose during the period, the National Economic and Development Authority said on Friday, March 6.

The results of the 2014 Annual Poverty Indicators Survey (APIS) released by the Philippine Statistics Authority showed poverty incidence among Filipinos rising to 25.8% in the first half of 2014, from 24.6% in 2013.

NEDA Director General Arsenio M. Balisacan said in a statement that per capita income in the first semester of 2014 was 6.4% higher than in 2013 – which indicated a trickle-down effect on the poor – but higher food prices “wiped out” these gains.

He said that among the bottom 30% of income-earners, per capita income increased by about 7.3% in the same period in 2013, with the fastest growth rate observed among those in the 5th income decile (8.5%), and the slowest increase among the top income decile (4%).

“Per capita income data in 2014 show that economic growth has benefitted the lower income groups, including the poor. This means that the twin strategies of encouraging investments and production alongside the implementation of a large-scale income redistribution program have worked,” said Balisacan.

The inflation rate in the first half of 2014, however, was at the higher-end of the target, as the consumer price index for food shot to 6.5%, and 2.7% for  non-food items, in the same period.

“The very high prices of food wiped out the gains in per capita income,” Balisacan said.

He cited, in particular, the “skyrocketing” price of domestic rice at the time, adding that low-income and vulnerable families usually spend 20% of their food budget on rice.

He said there is a need to revisit the government’s grain sector policy  particularly the quantitative restrictions (QR) policy on rice to achieve the government’s rice self-sufficiency goal, in view of its broader impact on food prices and poverty.

“While we definitely need to support the agriculture sector in general, we should also maximize the gains from trade and globalization. The private sector should be allowed to take the driver’s seat while government simply facilitates the access to both the import and export markets,” Balisacan said.

The PSA said in the first semester of 2014, a family of 5 needed at least P6,125 ($138.8) per month to meet basic food needs, and at least P8,778 ($199) for both basic food and non-food needs – amounts that represent the monthly food threshold and monthly poverty threshold, respectively.

The NEDA said that 10 out of the 17 regions experienced double-digit increases in their poverty thresholds, the highest in Region VIII with 14.2%, “possibly due to the lingering effects of Typhoon Yolanda, then in NCR with 13.5%, as it had to face the highest price of rice during the period.”

The PSA said that the food threshold, used to measure of extreme or substance poverty, is the “minimum income required to meet basic food needs and satisfy the nutritional requirements set by the Food and Nutrition Research Institute (FNRI) to ensure that one remains economically and socially productive.”

The poverty threshold is expanded to include basic non-food needs such as clothing, housing, transportation, health, and education expenses.

Poverty incidence among PH families up

The PSA also  reported that the poverty incidence among Filipino families in the first half of 2014 was estimated at 20%, higher than the 2013 level of 18.8%.

If described poverty incidence as “a crucial social indicator that guides policy makers in their efforts to alleviate poverty.”

The PSA said that the subsistence incidence among Filipino families was estimated at 7.6% in the first semester of 2014, slightly up from 7.5% in the same period in 2013.

Given the latest data, Balisacan stressed the need to update budget components of the government’s poverty reduction programs.

“The government’s social development programs, particularly the Conditional Cash Transfer…may have provided additional support to temper the rise in poverty but could have contributed more towards reducing poverty had the value of the grants increased with inflation,” he said.

The APIS  is a nationwide survey originally designed to provide non-income indicators related to poverty at the national and regional levels.

NEDA said that the 2014 APIS do not include sample households from Batanes, as less than 100 sample households were obtained, and Leyte, as no survey has been conducted in the province since Yolanda.  – Rappler.com