Aquino to businessmen: ‘You ain’t seen nothing yet’ 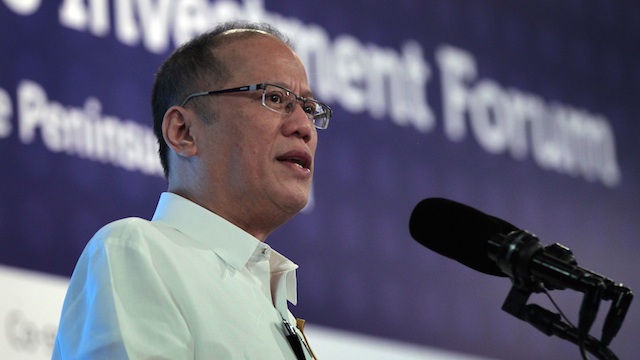 MANILA, Philippines – It has been a rough two months for President Benigno Aquino III following the Mamasapano crisis but on Tuesday, March 24, an upbeat Aquino brandished the economic accomplishments of his administration before promising greater things to come.

Aquino listed his administration’s achievements front of an audience of over 500 business leaders, investors, and policy makers at the Euromoney Investment Forum, which he called “a valuable opportunity” to share the progress of the Philippines under his watch.

In line with all this, Aquino said: “We are indeed making history. All these, and many other factors, have led to even greater optimism for our country’s prospects.”

He added: “Our administration remains hard at work so that we can maximize every opportunity available to us, and I think many of you will agree with me when I say: You ain’t seen nothing yet.”

Aquino said the administration’s plans include, among others, to continue growing the budget of the Department of Public Works and Highways (DPWH) from P165 billion in 2010 to almost P570 billion in 2015, and to have infrastructure spending comprise 5% of GDP by 2016.

Aquino said his administration is also focused on accelerating infrastructure development through the Public-Private Partnership program (PPP). He said that under his helm, 9 projects have been awarded, 16 are in the process of being bid out, and over 30 other projects are in various stages of development.

He added that the government is focused on developing the power supply situation in the country, noting that “a total of 48 committed incoming power projects with 4,693.6 megawatts of power are expected to come online between now and 2018.”

“Out of these 48 power plants, 21 will be from renewable energy, in line with our goal of diversifying our energy mix and building a power supply that is as clean and reasonably priced as possible,” the President said.

He added, “As you can see, we are determined to continue treading green pathways to development, and to maintain our status as one of the driving forces for clean energy in the region.”

The President also addressed the realization of the ASEAN Economic Community (AEC) expected by the end of the year, and assured that “the Philippines is taking every possible measure to take on a more dynamic economic role in the region.”

“Our compliance rate in the AEC scorecard in terms of our commitments to AEC 2015 is now at around 86%. I have already signed crucial laws that will help us meet our financial integration commitments, including an Act Strengthening the Insurance Industry and the Act Allowing the Full Entry of Foreign Banks in the Philippines,” he said.

The President said for the remainder of his term, the government “will continue expanding the range of financial tools available in our country, so we can maximize the advantages of integration.”

Aquino also talked about focusing on empowering micro, small, and medium enterprises (MSMEs) that would “establish economic dynamos in even the most remote parts of the nation,” which could become “one of the strongest and most direct tools towards inclusive growth.”

To accomplish this, he said the SME Roving Academy has conducted more than 1,871 training sessions focused on skills training, product pricing and costing, business planning, entrepreneurship development, and financial management, which has helped more than 85,000 potential and established entrepreneurs.

Aquino said he also signed the Go Negosyo Act which would build business centers that will offer MSMEs a full range of services, including business registration processing, training sessions and seminars, and the establishment of market linkages.

“By the end of this year, we intend on putting up 100 of these establishments across the archipelago,” he said.

The President seized the opportunity to encourage investors at the forum to put their money in the country.

“To those who are here to take a closer look at the Philippines, I invite you: Bet on the Filipino people, and discover for yourself how it’s more fun and more profitable to do business in the Philippines,” he said.

“If, on the other hand, you decline this invitation, perhaps I may pose a question, how confident are you that you will never say: we missed such a good opportunity?”

He also said the administration would continue to invest in “the limitless potential of our people, who have been the lifeblood of our success.”

“These past few years, our people have proven themselves to the world. But having been exposed to the skill, talent, loyalty, and resilience of so many of our countrymen, I know that we have only scratched the surface,” he said. – Rappler.com