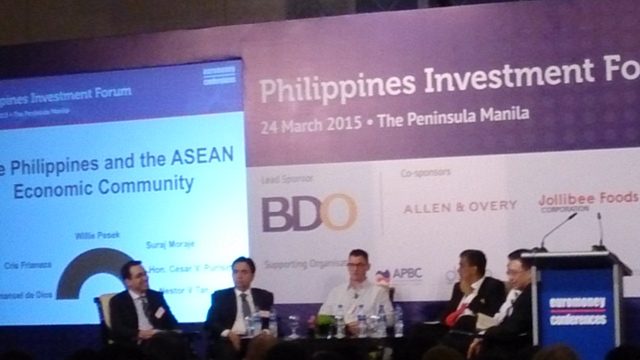 Facebook Twitter Copy URL
Copied
Most investors have higher than ‘excellent’ expectations about the country’s economic performance – which overall, is still positive

MANILA, Philippines – The Philippines is in such an enviable situation that, in a worst case scenario, it would still do well in an integrated Association of Southeast Asian Nations (ASEAN).

Factors like expanding government expenditure, along with robust private consumption and continued strong investments are expected to continuously fuel growth in 2015, the ADB said.

In the Euromoney Investment Forum session on ASEAN Economic Community (AEC) held also Tuesday, BDO Unibank President and Director Nestor V. Tan said that the country’s biggest enemy at the moment is the non-alignment of investors’ expectations with the actual state of the Philippine economy.

Most investors have expectations that are higher than excellent, Tan said.

Echoing Tan’s sentiment, fellow panelist Suraj Moraje, managing partner of Mckinsey and Company in the Philippines said his experience in the country since he arrived in 2013 has, so far, been positive.

The level of talent present in the country struck him the most, he added.

“The quality of the managers is quite good – the best talent compared with the whole region. I’m surprised the Philippines hasn’t had a more global presence,” Moraje said.

The level of talent present protects the country from competition from other ASEAN countries as there is enough talent to build niches in the international economy, Moraje said.

“Everyone looks at automotive manufacturing but there are other sectors in the country that are [also] interesting,” Moraje said.

Specifically, the country already has a wealth of talent in the areas of seafaring, health care, and consumer goods, and local companies in these areas still have more room to grow.

A strong India and China also bodes well for ASEAN economies as they raised the total volume of trade within the region.

“Everyone thinks of these markets as trade with ‘China or India’ but I think it should be both of them. Both giants will contribute to pulling the rest of the region through trade,” Moraje said.

Finance Secretary Cesar Purisima agreed with his fellow panelist, and said that ASEAN will eventually become a hub of Asian trade.

But Purisima is not seeing yet the possibility of a unified ASEAN currency.

“I don’t think that a single currency is needed, in hindsight even the European Union is now finding out that it’s not as easy as they thought it would be,” Purisima said.

He instead eyes a “single ASEAN capital market” to develop an ASEAN class of financial products.

Such will allow our industries and corporations to access the best possible financial products at the cheapest possible price because individually, the markets are not deep enough, Purisima explained.

In his speech at the Euromoney Investment Forum, President Benigno S. Aquino III said the country’s compliance rate in the AEC scorecard is now at around 86%.

“I have already signed crucial laws that will help us meet our financial integration commitments, including an ‘Act Strengthening the Insurance Industry and the Act Allowing the Full Entry of Foreign Banks in the Philippines,'” he said. – Rappler.com