May 28, 2015 8:01 AM PHT
Chrisee Dela Paz
Facebook Twitter Copy URL
Copied
State statisticians revise it to 6.6%, in time for today's scheduled release of data for the first quarter of 2015 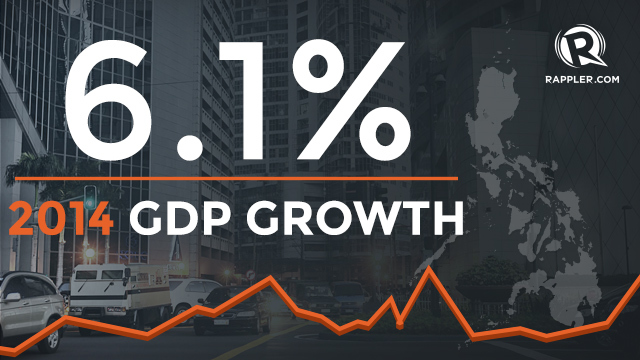 MANILA, Philippines – The growth of the Philippine economy during the fourth quarter last year was weaker than initially reported, state statisticians said Wednesday, May 27.

The Philippine Statistics Authority (PSA) in January announced that the gross domestic product (GDP) growth for the October-December 2014 period was 6.9%. This was revised Wednesday to 6.6% growth.

The downward revision came on the eve of Thursday’s scheduled announcement of GDP growth for the first quarter of the year.

The revised reading, according to PSA, was a result of “downward revisions in Trade; Other Services; and Electricity, Gas, and Water Supply.”

“The preliminary GDP estimates for the fourth quarter were released with a shorter time lag of thirty days and based on limited data that were available as of January 2015,” the PSA statement read.

Watch Thursday’s GDP growth announcement for the first quarter of 2015: