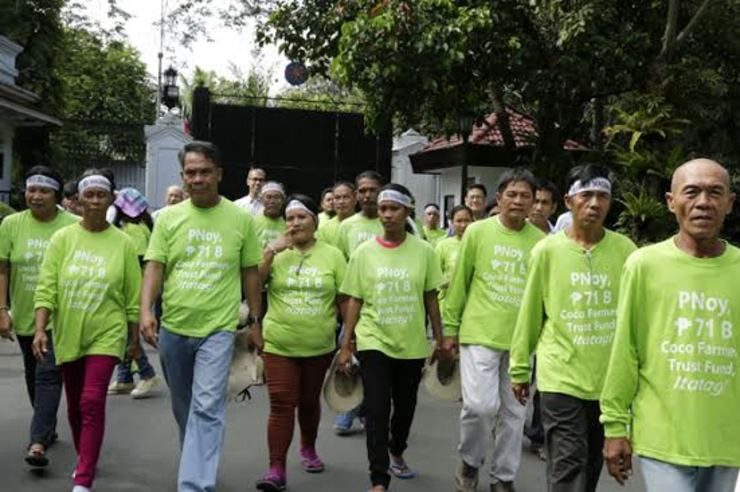 Facebook Twitter Copy URL
Copied
Presidential assistant Francis Pangilinan says the solution is the judicious use of the coco levy fund, not a knee-jerk opposition to it

MANILA, Philippines – The Supreme Court temporarily stopped the implementation of two executive orders on the privatization and reconveyance of the P74.3-billion ($1.65-billion) coco levy fund that the Court had recently declared to be public funds.

“The Court issued a Temporary Restraining Order effective immediately and until further orders from the Court against the implementation of Executive Order (EO) Numbers 179 and 180,” SC spokesman Theodore Te said Tuesday, June 30.

EO 179 requires the inventory, privatization and reconveyance and in favor of the government of all coconut levy assets, including but not limited to the shares of stock in the United Coconut Planters Bank (UCPB), Coconut Industry Investment Fund (CIIF) Companies and CIIF Holding Companies, as well as the 5,500,000 San Miguel Corporation shares registered in the name of the Presidential Commission on Good Government (PCGG).

EO180 ordered the immediate transfer and reconveyance of the coconut levy assets to the government and use them for the Integrated Coconut Industry Roadmap and the Roadmap for Coco Levy. (READ: Aquino signs EOs on utilization of coco levy funds)

In a 33-page petition filed on May 20,  the Confederation of Coconut Farmers Organizations of the Philippines led by Charles Avila accused Aquino of committing grave abuse of authority when he issued EOs 179 and 180 without the approval of Congress and the Sandiganbayan anti-graft court.

“Petitioner humbly submits that this judgment [by the Supreme Court], without prior legislative imprimatur, cannot be hastily and prematurely ‘implemented’ by the President through mere EOs. In passing the assailed EOs, the President acted in excess of his constitutionally mandated powers,” Avila said.

Avila added that the twin executive orders can only cause the further exclusion of farmers from the fund and open it to abuse.

The Court ruled that the coco levy funds were public funds in two decisions (Republic vs Sandiganbayan First Division and Eduardo Cojuangco Jr. in April 2011, and Cocofed vs Republic in January 2012).

In a statement on Wednesday, July 1, Presidential Assistant for Food Security and Agricultural Modernization Francis “Kiko” Pangilinan said that for nearly 4 decades, the coco levy fund has been entangled in legal disputes and this latest case has prolonged the dispute further.

“It is most unfortunate that some parties have stubbornly continued to oppose the use of the funds to the detriment of the beneficiaries, the aging coconut farmers,” Pangilinan said.

Pangilinan added that the solution is the judicious use of the fund, not a knee-jerk opposition to it.

“EOs 179 and 180 were meant to ensure that the coco levy funds are used judiciously. The unending legal disputes and the prolonging of the same are part of the problem,” he said.

Opposing the use of the fund is easy but it represents the old ways of doing things, a thing of the past, he said.

“We cannot be suing each other forever and by doing so, the reforms we seek will be further delayed. We need to move forward and getting the fund out of the way of legal disputes is a necessary first step. A step that unfortunately with this latest development has yet to be taken,” Pangilinan said. – Rappler.com