Duterte's tough talk and what it could mean for US, EU investments 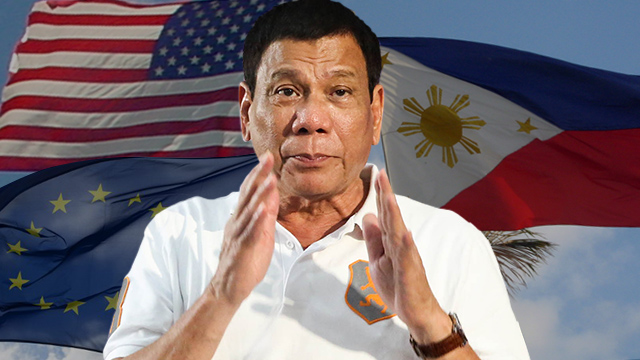 MANILA, Philippines – President Rodrigo Duterte has said the Philippines can survive without aid from either the US or the European Union. And he's issued statements that have hurt the US.

How is this affecting investor sentiment among Americans and Europeans?

“Most American companies that have a presence here understand that administrations come and go but our partnership in the business environment remains strong,” said American Chamber of Commerce in the Philippines (Amcham) Executive Director Ebb Hinchcliffe in a text to Rappler.

But he stressed “that those who haven’t been here long or are thinking of coming are certainly taking another look.”

Amcham also released a recent statement "voicing its concern over developments that could harm the long-standing optimism of American business to invest in the Philippines.”

While the chamber noted that the Philippines’ economic fundamentals are strong and its potential is high, it acknowledged that “our members have raised concerns that some basic American values – which Filipinos have long shared – may be weakening in the current environment."

“Certainly, the illegal drug menace is a serious threat in the Philippines, as it is in the US and elsewhere. However, the increased number of killings during the heightened anti-drug campaign is harming the country’s image, as portrayed by international media, and some investors are now asking whether this campaign reduces the rule of law,” the statement said.

While investments from the US and the EU have been erratic, government data show that both have been major contributors in recent years.

The US accounted for 60.43% and 39.41% of net foreign direct flows into the Philippines (excluding reinvest of earning) for 2014 and 2015, respectively, according to data by the Bangko Sentral ng Pilipinas (BSP).

For the first half of 2016, the US has so far contributed $70.5 million in direct investment inflows while the EU has poured in $103.91 million.

University of Asia & Pacific senior vice president and CRC research director Bernardo Villegas said that given the current situation, “there could be some planned US investments that may be either postponed or cancelled.”

He noted that “existing ones, especially among the consumer-oriented enterprises and BPO-IT will not be affected because of the fundamentals of a strong domestic market and a very competitive manpower base are still here whatever Duterte says and does.”

The effect of potential US investors staying away is particularly worrying for the BPO industry as it is the sector's dominant source of export revenue, accounting for 72.6% based on the BSP’s latest available data.

The Philippine workforce's  English language skills and cultural affinity give it a natural advantage when it comes to call centers aimed at the US market, but it's worth noting that the US is also the leading destination for software development and other forms of knowledge process outsourcing.

Villegas pointed out that "increased investments will come from Northeast Asian neighbors, i.e. Japan, South Korea, Taiwan and China who are not that sensitive to human rights issues. Together these countries are investing more already in the the Philippines than the Americans and Europeans.”

“Over the medium term,” he continued, “the Americans will still have a great interest in U.S-Philippine relations. They will be willing to tolerate some of the impulsive statements of President Duterte”.

Villegas also raised the possibility that the country in the current environment may not getting credit upgrades for the next few months or even years, a notion reinforced by Standard and Poor’s warning of increased political uncertainty in its latest report on the country.

The abrupt about-face in foreign policy could also affect the country’s trade with the US, especially as the negotiations continue on trade incentives such as the Generalized Systems of Preferences (GSP) program.

SOURCE: Philippine Statistics Authority. The US was the country's 3rd largest trading partner last year accounting for 12.7% or $16.491 billion total trade in 2015. Receipts from exports to USA were valued at $9.023 billion while payment for imports totaled to $7.468 billion, reflecting a trade surplus of $1.554 billion.

The GSP is a trade program that promotes economic growth in developing nations by eliminating tariffs for selected imports coming into the US market, making it essentially a partial free-trade deal.

Last year, the Philippines was the 5th largest beneficiary of the scheme having exported $1.4 billion worth of goods covered by the program according to the US Trade Representative office.

Albert Del Rosario, the previous foreign secretary, recently warned that these negotiations, along with talks with the EU for a free trade deal, may be affected by the controversy surrounding the war on drugs and the issue of extra-judicial killings.

Other potential losses from the shift include official development assistance from the US, which Del Rosario said has totaled over 4 billion from 2012-2015 and military assistance worth around $140 million.

"These have conditionalities when they go to US Congress [for approval]. Respect for human right is one conditionality. We will lose that," he said. (READ: US senator warns PH of 'further conditions' on aid) – Rappler.com