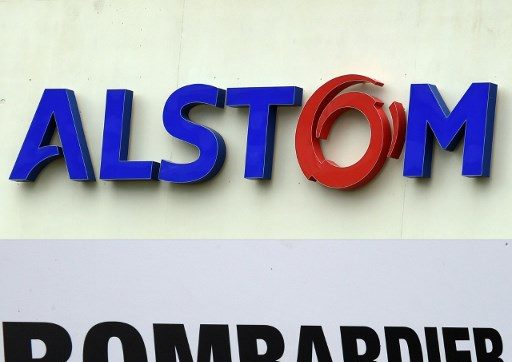 (FILES/COMBO) This combination of file photos created on February 17, 2020 shows (top) the logo of French power and transport engineering company Alstom in Montpellier on May 2, 2014 and the logo of the Bombardier company during the presentation of the 100th Bombardier Regio 2N (Regio2N) train at the Bombardier plant in Crespin, near Valenciennes on October 17, 2016. - The European Union has approved the buying of Canadian company Bombardier by French train giant Alstom under certain conditions, it was announced on July 31, 2020. (Photos by Pascal GUYOT and ERIC PIERMONT / AFP)

The European Commission gave French engineering giant Alstom the green light to buy Canadian train-maker Bombardier Transport on Friday, July 31, a year and a half after blocking a mega-merger with Germany’s Siemens.

Paris and Berlin were infuriated when Brussels blocked the former plan to build an all-European giant but the Canadian tie-up should now go ahead – with conditions.

Alstom will have to divest itself of some of its plants, but the new entity could still be of a scale to compete with the Chinese world leader in the sector, CRRC.

“Thanks to the comprehensive remedies offered to solve the competition concerns…the commission has been able to speedily review and approve this transaction.”

Alstom’s chief executive, Henri Poupart-Lafarge, had earlier in the day expressed confidence the decision would go his way this time.

“The dialogue with Brussels has been extremely fluid, extremely rapid since we announced the transaction with Bombardier in February, so 5 months later we have the decision,” he stressed.

“I believe that a dialogue of trust has been established. Is this the consequence of the difficulties of the previous dossier or not? I don’t know,” he added, referring to the blocked Siemens tie-up.

In order to appease Vestager’s anti-trust concerns, Alstom gave an undertaking to sell off some of its assets, including a French plant in Reichshoffen in Alsace which employs 780 people.

Before these concessions, the new group would have had a turnover of 15.5 billion euros per year and 76,000 employees.

Had the European Commission been worried that the project might have had hurt competition, it could have launched a more detailed investigation, which would have lasted about 4 months.

Alstom had notified Brussels in mid-June of the planned acquisition of its competitor Bombardier Transport for 6 billion euros in a deal to be finalized in the 1st half of 2021.

The two groups have a virtual monopoly on rolling stock in France, where they work together regularly, as they do on the Paris Metro and RER suburban transport network.

The threat of Chinese competition had already been cited as a reason for Siemens’ planned takeover of Alstom, which was blocked by the commission in February 2019.

But Brussels feared an overly dominant position in Europe in rail signaling and high-speed trains.

The EU should not help to create “fed and pampered” industrial champions, but let competition drive innovation, Vestager had argued.

Alstom had fewer overlapping operations with Bombardier than with the German group, which helped win approval of the deal.

Bombardier’s subsidiary Bombardier Transportation is based in Berlin and runs the largest railway plant in France, with 2,000 employees, in Crespin in the north of the country.