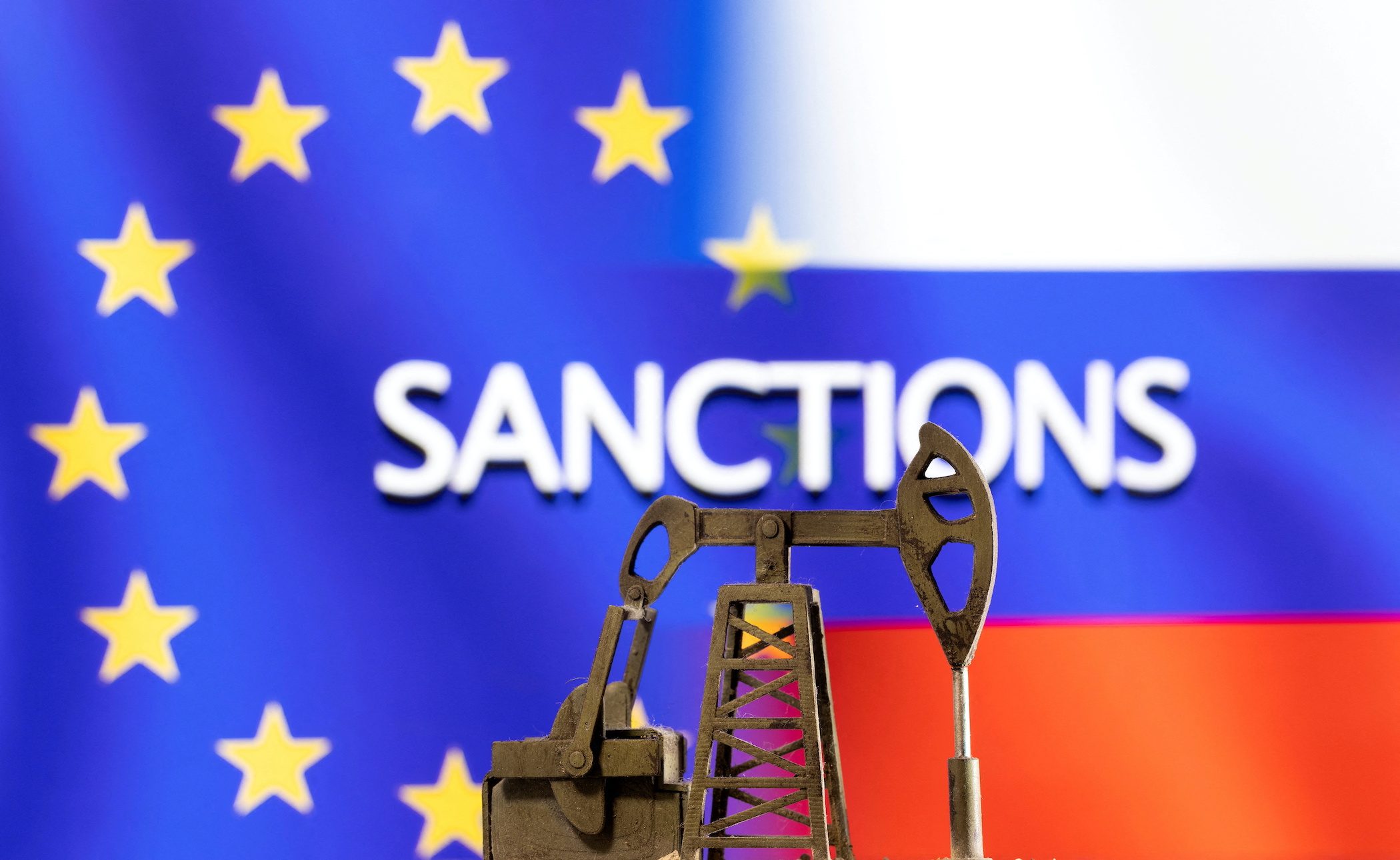 SANCTIONS. A model of a pump jack is seen in front of the displayed word 'Sanctions' and US and Russia flag colors in this illustration taken March 8, 2022.

STRASBOURG, France – The European Union’s executive on Wednesday, May 4, proposed the toughest package of sanctions yet against Moscow for its war in Ukraine, but several countries worried about the impact of cutting off Russia oil imports stood in the way of agreement.

The sixth round of measures, announced by European Commission President Ursula von der Leyen, included sanctions on Russia’s top bank and a ban on Russian broadcasters from European airwaves, as well as the embargo on crude oil in six months.

The EU faces the task of finding alternatives when energy prices have surged as it imports some 3.5 million barrels of Russian oil and oil products every day and also depends on Moscow’s gas supplies.

A handful of eastern EU countries are concerned that the halt would not allow them enough time to adapt, even though diplomats said Hungary and Slovakia would be given until the end of 2023.

Hungarian Foreign Minister Peter Szijjarto said on Facebook that, even with the lag, Hungary could only agree to the measures if crude oil imports from Russia via pipeline were exempt from the sanctions.

The landlocked country – whose Prime Minister Viktor Orban cultivates closer ties with the Kremlin than others in the bloc – received more than half of its crude oil and oil products imports from Russia last year, according to the International Energy Agency.

Slovakia has asked for a three-year transition period and the Czech Republic was seeking a delay of two or three years.

Reluctance to deliver measures that damage EU economies as well as Moscow faded in recent weeks as Russia’s invasion of Ukraine brought horrific images of slaughter in towns and concern about a renewed offensive in the east of the country.

Reflecting widespread anger in the West at Russian President Vladimir Putin‘s campaign – which Moscow says is a “special military operation” to defeat dangerous nationalists – the head of the EU executive said Moscow must be punished.

“Putin must pay a price, a high price, for his brutal aggression,” von der Leyen told the European Parliament in Strasbourg. “Today, we will propose to ban all Russian oil from Europe,” she said to applause in the chamber.

The commission’s proposal, which needs unanimous backing by the 27 EU countries to take effect, includes phasing out supplies of Russian crude oil in six months and refined products by the end of 2022. It also proposes to ban in a month’s time all shipping, brokerage, insurance, and financing services offered by EU companies for the transport of Russian oil.

If agreed, the embargo would echo the actions of the United States and Britain, which have already imposed bans to cut one of the largest income streams to the Russian economy.

Bulgaria, Hungary, Slovakia, and the Czech Republic raised concerns about the oil embargo at a meeting of national envoys to the EU on Wednesday, a source said, noting however that a deal could be achieved on Thursday, May 5, or later this week. One diplomat said Greece also had concerns about the impact on its shipping sector.

“In the short term it might leave Russian revenues high while implying negative consequences for the EU and the global economy in terms of higher prices – not to mention retaliation risks [by Russia] on natural gas supplies,” he said.

Apart from oil, the latest round of sanctions proposes hitting Sberbank, Russia’s top lender, adding it to several banks already cut off from the SWIFT messaging system.

“We hit banks that are systemically critical to the Russian financial system and Putin’s ability to wage destruction,” von der Leyen said.

Sberbank did not immediately respond to a request for comment. The lender, which exited almost all its European markets in March, has previously said other rounds of sanctions would not have a significant impact on its operations.

The head of the Kremlin-allied Russian Orthodox Church, Patriarch Kirill, was to be blacklisted, a source told Reuters, and state-owned Russian broadcasters RTR-Planeta and R24 would be shut out of European airwaves, according to diplomats.

Von der Leyen also proposed a recovery plan for Ukraine once the conflict ends, saying hundreds of billions of euros were needed to rebuild the country.

“Eventually, it will pave the way for Ukraine’s future inside the European Union,” she said. – Rappler.com