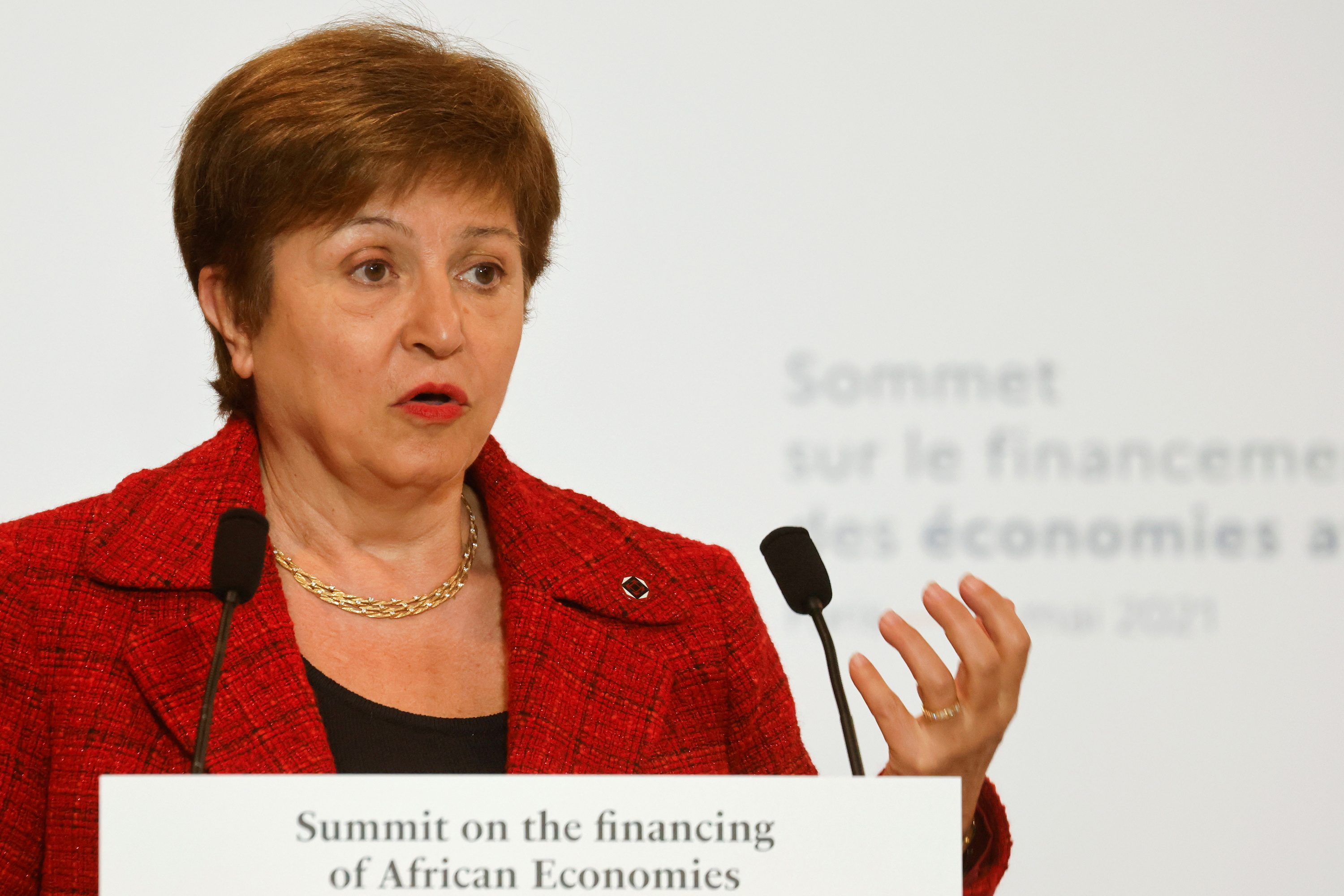 UNDER FIRE. International Monetary Fund Managing Director Kristalina Georgieva speaks during a joint news conference at the end of the Summit on the Financing of African Economies in Paris, France, May 18, 2021.

A former World Bank official who prepared reports at the center of a data-rigging scandal that aided China defended International Monetary Fund (IMF) chief Kristalina Georgieva on Thursday, September 23, as the Economist magazine called for her to resign over her alleged role in the controversy.

Shanta Devarajan, who helped oversee the World Bank’s “Doing Business” report in 2017, said that an outside investigation report alleging that Georgieva, during her time as World Bank chief executive officer, applied “undue pressure” on staff to boost China’s ratings was “beyond credulity.”

Devarajan, now a Georgetown University professor of development policy, said in a series of tweets that he never felt any pressure to change China’s scores and said that WilmerHale lawyers used only half of his statements from an hours-long interview.

Georgieva’s “direction was to verify the China numbers, making sure that China received credit for the reforms they undertook, without compromising the integrity of Doing Business. The Bank’s lawyers left out the latter phrase,” he said, adding that a rush to judgment on Georgieva’s prior role as World Bank CEO “is misguided.”

Some of the changes were correcting coding errors “or judgment calls on questions where judgment was required,” said Devarajan, who was a senior director in the World Bank’s Development Economics group until 2019.

His tweets came after a scathing editorial from the Economist, an influential magazine in policy circles, saying Georgieva should resign because the incident has undermined the IMF’s credibility as custodian for the world’s macroeconomic data and intermediary between economic powers.

“The head of the IMF must hold the ring while two of its biggest shareholders, America and China, confront each other in a new era of geopolitical rivalry,” the Economist said, adding that critics of multilateralism are already citing the findings as evidence that international bodies cannot stand up to China.

“The next time the IMF tries to referee a currency dispute, or helps reschedule the debt of a country that has borrowed from China, the fund’s critics are sure to cite this investigation to undermine the institution’s credibility. That is why Ms. Georgieva, an esteemed servant of several international institutions, should resign,” the editorial said. Georgieva, a Bulgarian who is a former World Bank economist and European Commission official, has denied the accusations in the WilmerHale report, saying last week they are “not true” and she has never pressured staff to manipulate data.

Georgieva has personally retained a public relations firm, SKDK, to push back against the allegations.

Joseph Stiglitz, a former World Bank chief economist, also called the WilmerHale report “a hatchet job” and said that he has also been told by “Doing Business” staff that they did not feel pressure from Georgieva in 2017.

“The fingerprints aren’t there. The report does not accurately reflect what happened,” said Stiglitz, who also questioned why it did not mention current president David Malpass when data irregularities involving Saudi Arabia’s rating occurred under his leadership.

The report found “no evidence suggesting that the Office of the President or any members of the board” were involved in changes that boosted Saudi Arabia’s ratings.

The IMF’s executive board is conducting its own review of the allegations.

An IMF spokesman declined comment on the Economist‘s editorial. A US Treasury spokeswoman also declined comment beyond the Treasury’s earlier statement that it is analyzing “serious findings” in the WilmerHale report.

A World Bank spokesman declined comment on the Devarajan tweets. Republicans in the US Congress who have been critical of Georgieva’s work at the IMF have stopped short of calling for her to be ousted.

Three Republican House of Representatives members sent a letter to US Treasury Secretary Janet Yellen requesting that she report the Treasury review to Congress, including information on Georgieva’s interactions with Chinese IMF officials in the decision-making process for August’s $650-billion allocation of IMF monetary reserves known as Special Drawing Rights (SDRs).

China received about $42 billion worth of new SDRs. – Rappler.com