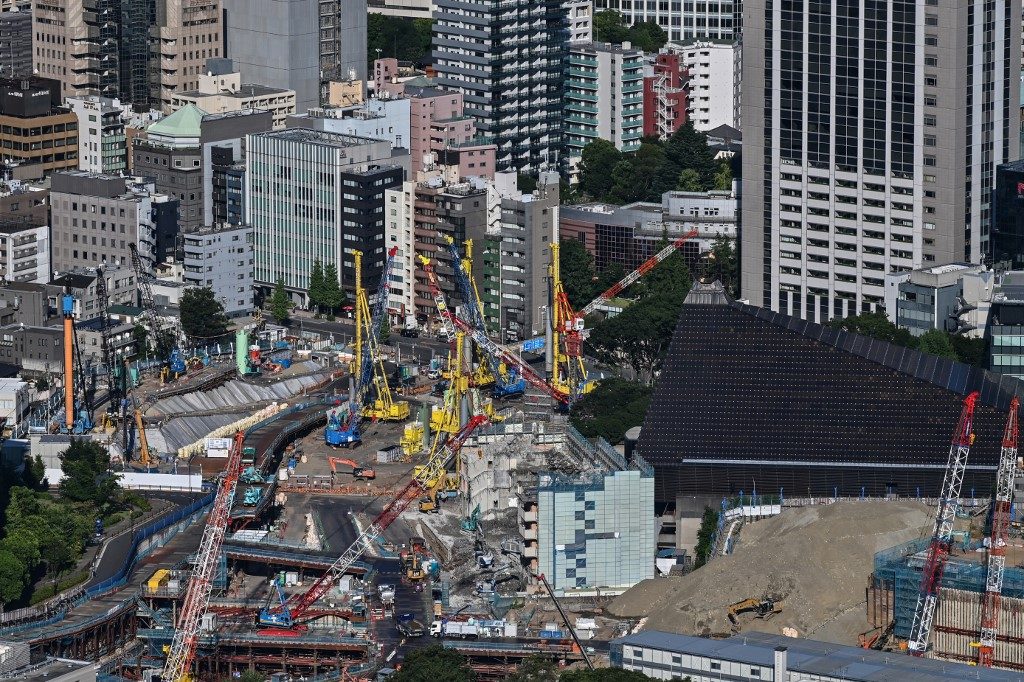 Cranes work on the construction site of the new Mori Building Company in the Azabudai area in Tokyo on August 26, 2020. (Photo by Charly TRIBALLEAU / AFP)

Facebook Twitter Copy URL
Copied
Here is a look at the key goals of Japanese Prime Minister Shinzo Abe's economic policy, and the extent to which they have been achieved

When Japan’s Shinzo Abe took office in 2012, he vowed to reinvigorate the country’s economy with a policy that came to be dubbed “Abenomics.” But what has the program achieved?

As the prime minister announced on Friday, August 28, he will resign, here is a look at the key goals of the policy, and the extent to which they have been achieved:

On his return to power after a disastrous first term between 2006 and 2007, Abe cut a deal with the Bank of Japan (BoJ) that saw the central bank implement a policy of unprecedented monetary easing.

The goal was to reduce the cost of borrowing, stimulating business activity and personal consumption, and pushing inflation up to a 2% target to end the deflation that had haunted the Japanese economy since the 1990s.

The BoJ’s policy helped strengthen the competitiveness of Japanese exporters by weakening the yen, but the inflation target has remained stubbornly out of reach.

The Japanese economy has gradually recovered and prices have slowly increased, but are still far short of expectations.

The country even experienced deflation between 2015 and 2016, which made an unwelcome return this year with the global economic crisis caused by the coronavirus.

The BoJ’s efforts were paired with stimulus in the form of massive government spending, the second of the “3 arrows” of Abenomics.

Hundreds of billion of dollars was spent from 2013, particularly for the modernization of infrastructure nationwide, some of it with an eye on the Tokyo 2020 Olympic Games.

The spending boosted revenue and investments for business, stimulated financial and real estate markets, and helped support the country’s growth for several years.

But it didn’t stop the national economy from derailing several times: gross domestic product (GDP) contracted between 2014 and 2015 before recovering, and the country fell into recession again in 2020, even before the coronavirus crisis hit.

With an aging population more inclined to save than spend, consumption has remained stubbornly low. And spending was hit further by two consumption tax hikes, in 2014 and 2019.

Economists warned both times that the increases would send the economy into reverse, but the government pushed ahead, spurred by its burgeoning obligations in a country with the world’s highest debt-to-GDP ratio.

With the coronavirus causing economic devastation, and domestically forcing the postponement of the Olympics and a nosedive in tourist revenue, the government has unleashed massive new stimulus.

But Japan’s growth potential is dropping because “the government lacks a green recovery vision and digital initiatives,” said Sayuri Shirai, a professor in Keio University’s faculty of policy management and former BoJ policy board member.

The first two arrows of Abenomics could not work without the third pledged by the premier: structural reforms.

A chief target was Japan’s labor market, characterized by a post-war boom era model in which workers could expect lifelong employment and extensive benefits in jobs at one of the country’s behemoth firms.

But attempts to overturn the calcified model and promote greater flexibility have moved too slowly, experts say.

“At first we thought the government was buying time by monetary easing and fiscal policy, to prepare for structural reforms which are painful,” said Masamichi Adachi, an economist with UBS.

“However this time was not used wisely for structural reforms,” he told Agence France-Presse.

There have been some bright spots, including a rising number of women and older people in the workplace, and some loosening of the country’s strict immigration policy, which may help tackle chronic labor shortages.

But many of the reforms “have been not bold enough” to boost labor productivity,” Shirai said.

The pandemic, she added, revealed “not only Japan’s corporate sector vulnerability but also inadequate electronic public services” and the slow implementation of government policies. – Rappler.com