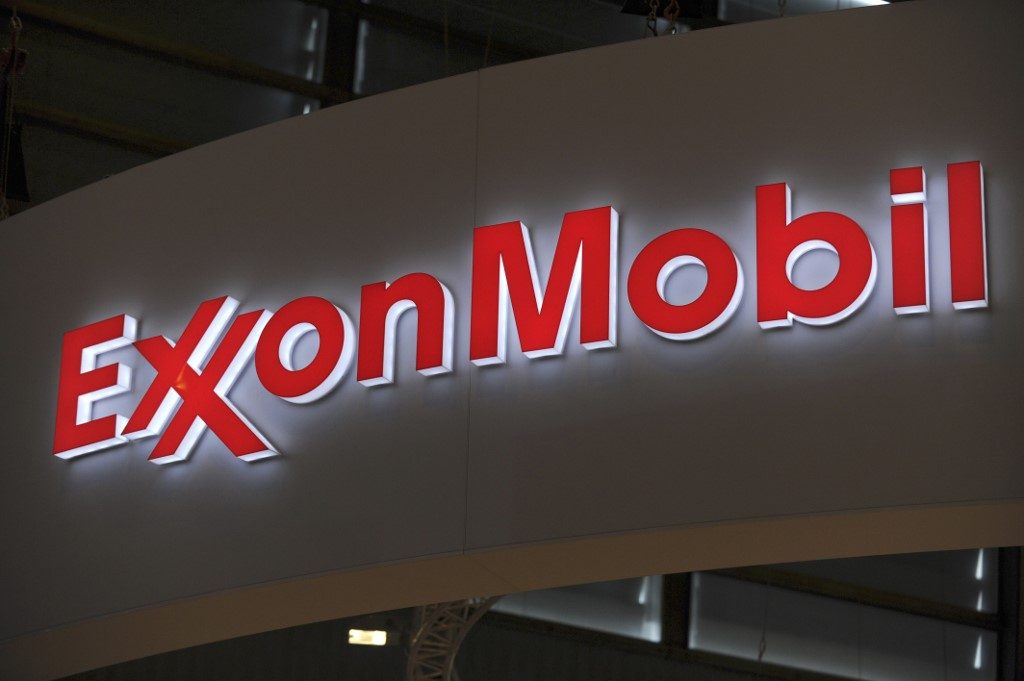 EXXONMOBIL. In this file photo taken on June 2, 2015, the logo of US oil and gas giant ExxonMobil is shown during the World Gas Conference exhibition in Paris.

Facebook Twitter Copy URL
Copied
ExxonMobil reports a loss of $680 million, the 3rd straight quarter without profitability. At Chevron, the loss comes in at $207 million.

US oil giants ExxonMobil and Chevron reported another quarter of red ink Friday, October 30, as uncertainty over oil demand dented by the coronavirus forced the petroleum sector to rein in spending.

While both companies were hit by low commodity prices, driven by worldwide business and travel shutdowns, ExxonMobil had the bigger loss and again faced tough questions from investors over its strategy as shares tumbled.

The reports came a day after ExxonMobil announced it was cutting 1,900 US jobs, part of a plan to reduce global headcount by about 15% through 2022.

Company executives said they have been heartened by the comeback in consumption for diesel and gasoline, but that jet fuel demand is still 45% below pre-COVID-19 levels.

ExxonMobil stressed that it expects demand to normalize after the pandemic, making continued investment in petroleum necessary. The company has long argued that a transition to zero-emission energy is years off.

“We remain confident in our long-term strategy and the fundamentals of our business, and are taking the necessary actions to preserve value while protecting the balance sheet and dividend,” ExxonMobil chief executive Darren Woods said in a statement.

“We are on pace to achieve our 2020 cost-reduction targets and are progressing additional savings next year as we manage through this unprecedented down cycle.”

ExxonMobil, which was bumped from the prestigious Dow Jones stock index in August following a plunge in its market value, reported a loss of $680 million, the 3rd straight quarter without profitability. The company reported $3.2-billion profit in the same period of 2019.

At Chevron, which has much lower debt than ExxonMobil, the loss came in at $207 million, compared with profits of $2.6 billion in the year-ago period, as revenues fell 32.3% to 24.5 billion.

Industry experts expect oil and refined product demand to recover once the world economy gets past the pandemic, but there remains much uncertainty on when that will happen.

A “delayed recovery scenario” in which the global economy comes back only in 2023 would require about 4 million barrels per day less of oil than if COVID-19 is gradually brought under control in 2021, according to a report released earlier this month by the International Energy Agency (IEA).

Under an IEA “sustainable development” scenario with more aggressive action to address climate change, oil demand through 2040 could fall to under 70 million barrels a day compared with around 100 million or more in the other scenarios.

Peter McNally, an analyst at consultancy Third Bridge, said he expects a partial recovery in oil demand in 2021 and a full recovery in 2022 and “some growth over the next decade.”

The speed of a shift to electric cars should not be overstated, McNally said.

“Not everyone is going go buy a Tesla,” he said. “It’s going to take some time for that.”

ExxonMobil executives were pressed repeatedly on a conference call about their intention to maintain a generous dividend, which the company has long championed as a priority for it and its shareholders.

Earlier this week, ExxonMobil maintained its payment of 87 cents per share.

CFRA Research has estimated the dividend will cost ExxonMobil about $15 billion for the year, not far under the expected capital budget for 2021.

But he acknowledged that “all bets are off” if things turn out much different from that. – Rappler.com