MANILA, Philippines— The country has 12 representatives on Forbes' list of the richest people on the planet this year.

SM Group founder Henry Sy Sr leads the Filipinos on the World's Billionaires List 2018, released by Forbes late Tuesday, March 6. Sy, who has been the richest Filipino since 2005, was jointly ranked with American hedge fund manager James Simons at #52 with an estimated net worth of $20 billion.

This put Sy ahead of Tesla Incorporated and SpaceX founder Elon Musk who ranked just behind him at #54.

Sy was also the only Filipino who broke the top 100 of the world's billionaires. The other 11 Filipino tycoons who made the list are: 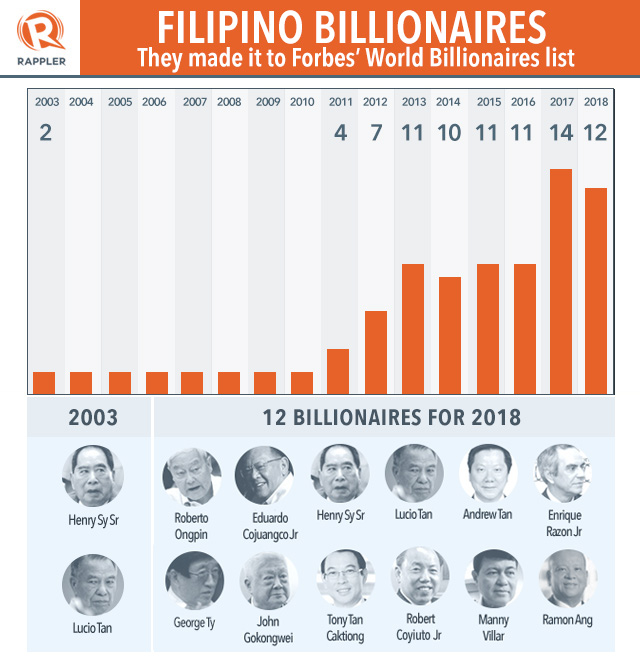 Despite the country's strong representation, the number of Filipino dollar billionaires dropped from the record 14 in 2017, with DoubleDragon Properties co-chairman Edgar "Injap" Sia II as well as DMCI Holdings founder David Consunji – who passed away last year – both off the list.

Despite the drop in number, the combined wealth of the Filipino billionaires in 2018 actually increased to $55.2 billion compared to the $45.8-billion total wealth the year before.

Sy was the biggest gainer, adding $7.3 billion to his net worth from $12.7 billion last year to the current $20 billion.

Villar, meanwhile, doubled his estimated net worth to $3 billion from last year's estimate of $1.5 billion. Razon was also a notable gainer, upping his net worth this year to $4.8 billion from the $3.4 billion last year.

Coyiuto was the only Filipino on the list with a notable drop in net worth, falling by $100 million from last year's $1.41 billion.

Amazon founder Jeff Bezos is now the world's richest man and the first on the Forbes list to have a 12-figure net worth at $112 billion. He dethroned Microsoft founder Bill Gates who sits 2nd with $90 billion, followed by legendary investor Warren Buffett at 3rd with $82 billion.

French luxury king and LVMH chief executive officer Bernard Arnault ranked 4th with $72 billion along with his family, while Facebook founder Mark Zuckerberg rounded out the top 5 with $71 billion.

Globally, there are a record 2,208 billionaires on the Forbes list, representing 72 countries and territories including the first ever from Hungary and Zimbabwe.

The combined wealth of the world's billionaires stands at $9.1 trillion, up 18% from last year, while the average net worth is also a record $4.1 billion.

This year also saw 259 newcomers, including the first cryptocurrency billionaire, while 121 dropped out.

The world's two largest economies dominated the list. The United States had a record 585 billionaires, followed by mainland China with 373. – Rappler.com