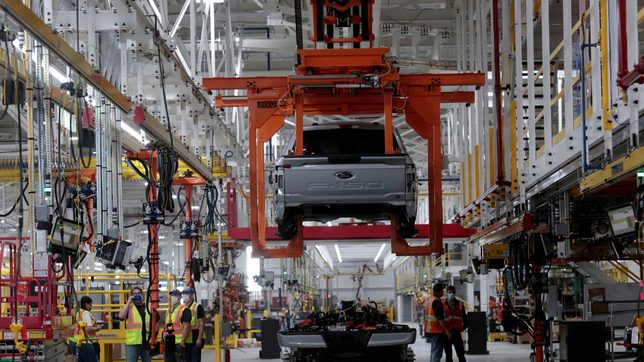 FORD. The body and chassis of a Ford pre-production all-electric F-150 Lightning truck prototype are seen at the Rouge Electric Vehicle Center in Dearborn, Michigan, September 16, 2021.

Facebook Twitter Copy URL
Copied
The results Ford and GM reported show that managing the supply chain pressure will not be easy, and that investors are watching the companies closely and critically

Detroit automakers Ford Motor Company and General Motors Company both took advantage of insatiable demand from US consumers for trucks and SUVs to offset the pain caused by supply chain bottlenecks.

But both automakers warned investors that the cost pressures created by disruptions in the global semiconductor supply chain and price spikes for other commodities will continue well into next year.

For the Detroit automakers, that means sustaining a complex juggling act: Pushing the price envelope on popular vehicles such as the Ford F-150 or Cadillac Escalade while scrambling to stabilize flows of semiconductors and keeping a lid on the costs of raw materials from steel to aluminum to magnesium.

How much higher prices can go is a key question. The average GM vehicle sold for more than $47,000 during the third quarter. Ford raised prices on vehicles sold in North America by nearly $3,500 each, on average. Both companies said the higher prices offset higher raw material costs in the quarter.

The results Ford and GM reported on Wednesday, October 27, show managing the supply chain pressure will not be easy, and that investors are watching the companies closely and critically.

GM shares tumbled 5.2% on Wednesday even though the company said its full-year 2021 operating profits would be at the high end of a range between $11.5 billion and $13.5 billion.

Both of the once-dominant Detroit automakers are now overshadowed by electric vehicle maker Tesla, which last week reported stronger profit margins and earlier this week achieved a market capitalization of $1 trillion, more than its top five rival automakers combined.

While relying almost entirely for now on profits from petroleum-fueled trucks, both GM and Ford executives talked up their ambitions to challenge Tesla in the EV market.

GM chief executive Mary Barra told CNBC the company could “absolutely” catch up to Tesla in US sales of EVs by 2025. Ford executives said they will invest $30 billion in battery electric vehicle development from 2020 to 2025.

Ford chief executive Jim Farley said the automaker has orders for 160,000 of its electric F-150 Lightning pickups, and its electric Transit commercial van is “completely sold out.”

Ford reported a stronger-than-expected third-quarter profit and raised its full-year earnings forecast as strong demand for its trucks helped offset the hit from a global semiconductor shortage.

However, Ford cautioned that higher steel and aluminum prices could cost it $1.5 billion next year, and warned of “inflationary pressure impacting a broad range of costs” in 2022.

Barra said the company was hit by pandemic-related shutdowns of semiconductor factories in Malaysia. Ford executives said their supplies of chips improved.

Ford’s net income fell to $1.8 billion, from $2.4 billion a year earlier. Still, Ford said it will restore a quarterly dividend, paying shareholders 10 cents a share or $400 million in total in the fourth quarter.

Another challenge GM and Ford will share if supply chain pressures do ease in the second half of 2022 is finding a new sweet spot for prices, production volumes, and inventories of vehicles at dealerships.

Ford officials said the company wants to aim for 50 days of vehicles in stock, not the 75 that was normal before the pandemic. Barra said GM also wants to keep inventories in tighter check.

“As availability does improve…the very strong pricing will mitigate some,” Barra said. “But we will be very disciplined.” – Rappler.com