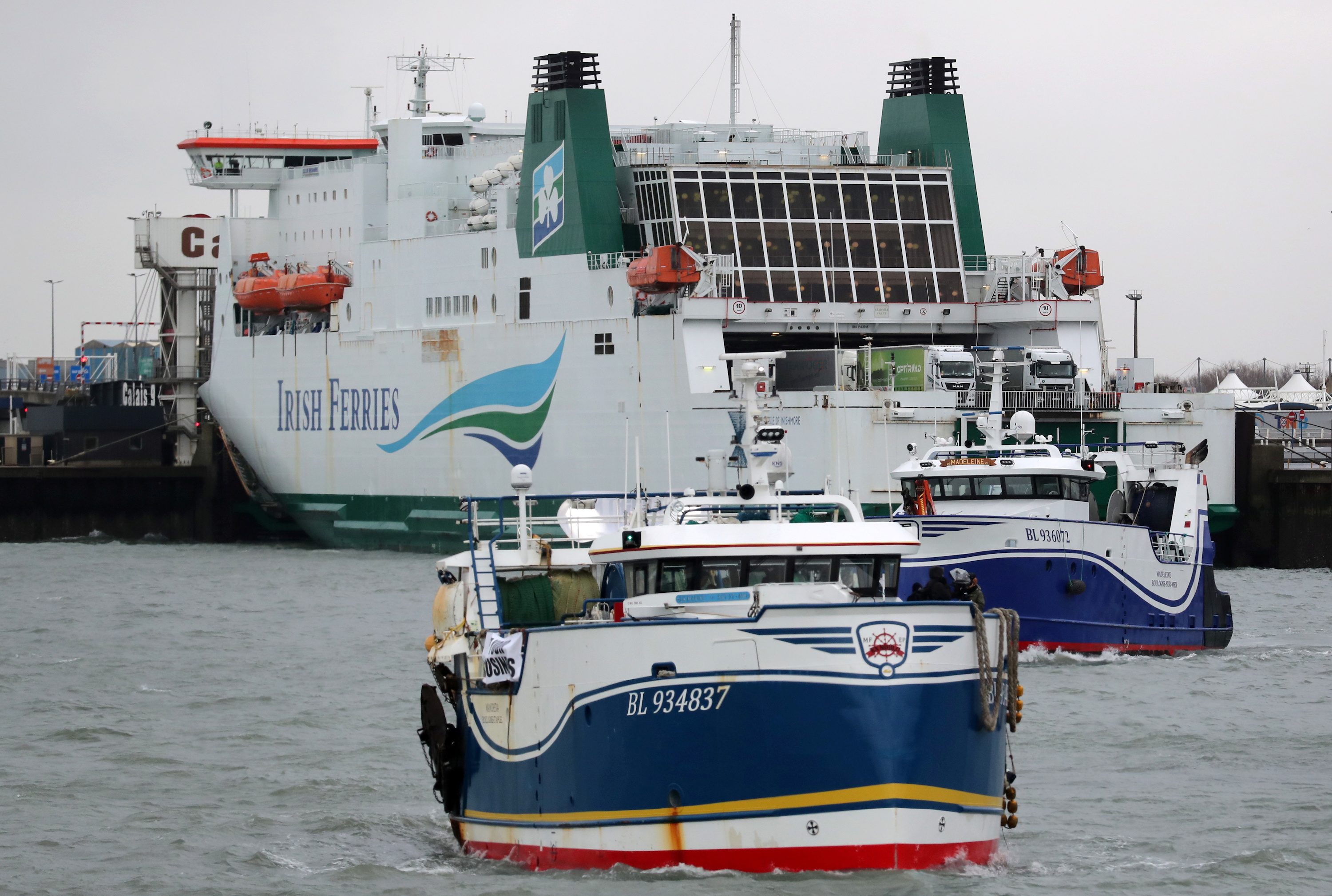 LICENSE DISPUTE. French fishermen on their trawlers drive past a ferry during an action to block the port of Calais during a day of protests to mark their anger over the issue of post-Brexit fishing licenses, in Calais, France, November 26, 2021.

Facebook Twitter Copy URL
Copied
'The negotiations continue and we want them to know that we will not be the forgotten consequence of Brexit,' says a fisherman from France who has yet to get a permit to operate in British waters

French fishermen temporarily blockaded the port of Calais and Channel Tunnel rail link in an effort to disrupt trade between Britain and the continent on Friday, November 26, escalating a row over licenses to fish in British waters.

Fishing rights plagued Brexit talks for years, not because of their economic importance but because of their political significance for both French President Emmanuel Macron and British Prime Minister Boris Johnson.

Britain and the EU agreed to set up a licensing system to grant fishing vessels access to each other’s waters but France says it has not been given the full number it is due, while Britain says only those lacking the correct documentation have not been granted.

Several trawlers maneuvered inside the port to hold up the passage of two ferries operated by DFDS and P&O as they approached Calais earlier on Friday, a major entry point to the European market for British goods.

At the Channel Tunnel terminal in nearby Coquelles, trucks and cars quickly tailed back towards the highway after the fishermen erected barricades of burning wooden pallets and lit smoke canisters.

The fishermen manning the roadblocks said they wanted to see progress by December 10.

“If we don’t get anywhere…believe me, the English will not have a magic Christmas. We’ll ruin the party,” said Jean Michel Fournier, a fisherman from near Boulogne.

Britain says it is respecting the post-Brexit arrangements while France says Britain is not honoring its word.

A spokesman for Johnson said Britain’s position on issuing fishing licenses hadn’t changed and London was monitoring the protests.

France last week said it was still waiting for 150 licenses from Britain and the Channel Islands. The dispute focuses on access to territorial water 6 to 12 miles from the coast.

Britain denies discriminating against French fishermen and says 98% of fishing licenses have been granted to European Union boats since Brexit.

That figure includes the roughly 1,700 licenses issued to EU vessels to operate in more distant waters situated in the UK’s exclusive economic zone, which extends 12 to 200 nautical miles from the coast.

Dover-Calais is the shortest sea route between Britain and the EU and has been one of Britain’s main arteries for European trade since the Middle Ages. Before Brexit and the pandemic, 1.8 million trucks per year were routed through Calais.

Earlier in the day, fishermen blocked a small British cargo vessel outside the port of Saint-Malo. The Normandy Trader plies the short route between Jersey and France. France says Jersey, a British Crown Dependency, has also failed to issue licenses due to its fishermen under a post-Brexit deal.

“The negotiations continue and we want them to know that we will not be the forgotten consequence of Brexit,” said fisherman Nicolas Descharles, who would normally operate in British waters every day through the autumn but has not received a permit.

In October, France briefly seized a British scallop dredger off its northern coast for allegedly operating without a legitimate permit, and both countries have this year sent patrol vessels to waters off Jersey. – Rappler.com