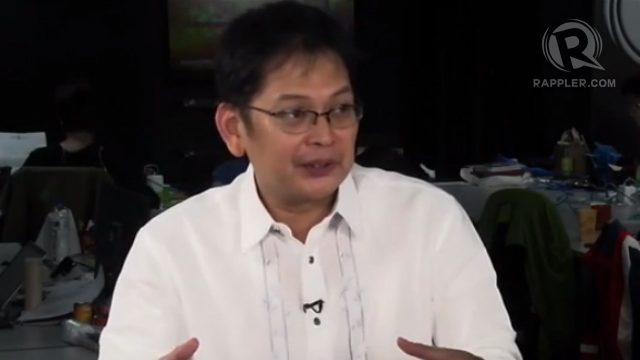 NOT A DUMPING SITE. Bureau of Customs Chief John "Sunny" Sevilla says the Philippines is not a garbage dump site.

The Bureau of Customs (BOC) filed on Thursday, February 20 a smuggling complaint against the company that allegedly imported a shipment of garbage disguised as assorted plastic scrap from Canada.

BOC Chief John “Sunny” Sevilla said the case was not the usual wherein his bureau sues for underdeclaration or misdeclaration of imported goods. “Ngayon, ibang klase ng violation ang ating sinusugpo (Now, we are fighting a different kind of violation),” he said.

“Unang una po, ‘di po basurahan ang Pilipinas (First of all, the Philippines is not a dumping site),” Sevilla said.

The BOC filed charges against Adelfa Eduardo, owner of Chronic Plastics, a firm in Valenzuela City, for allegedly violating the Tariff and Customs Code of the Philippines (TCCP) and the Toxic Substance and Hazardous Wastes and Nuclear Wastes Control Act of 1990 (Republic Act 6969).

Republic Act 6969 prohibits the importation of hazardous waste to the Philippines. The TCCP holds an importer criminally liable for illegal imports.

“It is very clear that these waste materials were shipped to the Philippines illegally. There were violations in the process for importation and misdeclarations made on paper. Moreover, we must be mindful of the threat to public health and safety that these wastes could bring to our people,” said Sevilla in a BOC press statement.

The container vans arrived at the Manila International Container Port in 6 batches from June to August 2013.

Though the shipments were declared by Chronic Plastics as recyclable plastic scrap materials, an inspection revealed they were in fact used mixed and unsorted plastic, household garbage and even used adult diapers.

Chronic Plastics declared that the total value for 19 of the containers is P3.9 million.

Sevilla clarified that he cannot ascertain the intention of the importer.

Environmental groups condemned the alleged smuggling because aside from potentially endangering humans, animals and ecosystems exposed to the waste from Canada, continued smuggling of this kind could add to the already problematic garbage issues in the country.

“It further undermines complementary efforts of LGUs and Congress to reduce waste, specifically plastic waste. On one hand, here we are uniting to address our increasing plastic waste problems, while on the other, there are efforts like this that aggravate the situation,” said Romy Hidalgo, an official of EcoWaste Coalition.

Waste audits conducted by environmental groups over the years revealed that around 75% of detritus found in Manila Bay is composed of plastic waste, 25% of which are plastic bags.

More than 90 LGUs in the country have enacted plastic bag bans while a national ban is currently being drafted.

“Countries like Canada may be beginning to think that the Philippines is the mythical ‘away’ of their ‘throw-away’ culture,” lamented Global Alliance for Incinerator Alternative’s Shalimar Vitan.

“No community, let alone a country, deserves to be unjustly treated as a dumping ground. No community is disposable.”

Buddy Boyd of Zero Waste Canada said, “We as people of Canada are deeply embarrassed at how government policies here have caused such bad behavior by some towards the environment and the good people of the Philippines. This is a disgrace.”

He added that “horrible” collection methods by the government has led to badly contaminated garbage which “many of the greedy haulers think they can export to other nations.”

Sevilla said the BOC will coordinate with the Canadian embassy, as the importation of waste might also be in violation of Canadian law.

Environmentalists called on Environment Secretary Ramon Paje to initiate the ratification of the Basel Ban Amendment.

While Philippines and Canada are signatories to the convention, both are yet to ratify the Basel Ban Amendment, which also bans the shipment of waste for recycling. Before the amendment, waste could be transported to developing countries as long as the waste was going there to be recycled. But green groups said this would allow waste traders to hide under the guise of recycling.

But Jose Cuna, Director of the DENR’s Environment Management Bureau, said the ratification would only come at the end of the year, at the soonest.

“We’re still in the process of consulting with the industries, all the stakeholders. Nothing is clear yet. We’d love to [ratify] but we have to see everybody’s position. Whatever we’re standing up for is for the country.”

Environmentalists urgently call for the immediate return of the garbage to its origin country. To this end, the BOC has sent a letter to the DENR. – Rappler.com