Greece banks on tourists for relief from bad loans 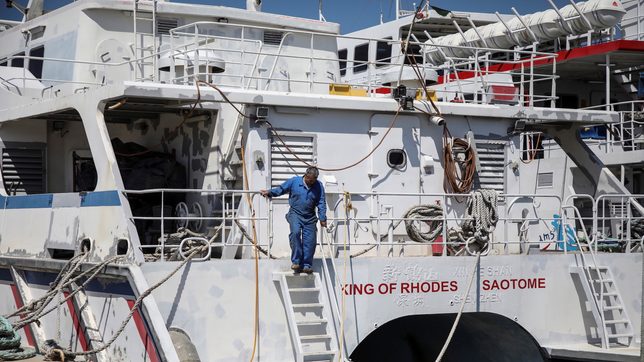 UNDER REPAIR. A worker leaves a passenger catamaran that is being repaired at the Nereus Boatyard on the island of Rhodes, Greece, April 12, 2021.

Facebook Twitter Copy URL
Copied
The Greek central bank estimates that a quarter of loans to the tourism sector, which in turn accounts for a fifth of the overall economy, are now non-performing

Rhodes ferry operator Paris Kakas cannot afford another summer lost to the pandemic if he is ever to repay the millions of euros he owes: “When the bank comes asking, we say: sorry.”

His anxious wait for tourists to return highlights a crucial test for Greek banks, still grappling with Europe’s heaviest burden of bad debts and the legacy of the financial crisis.

Greece is counting on salvaging this summer season to head off a wave of insolvencies among tourism businesses, already on their knees after a disastrous 2020.

Rhodes attracted 2.4 million visitors in 2019 but in April this year, shuttered luxury resorts and rental car lots overgrown with daisies gave the Greek island near the Turkish coast the air of a ghost town.

The Greek central bank estimates that a quarter of loans to the tourism sector, which in turn accounts for a fifth of the overall economy, are now non-performing.

More worryingly, a third of all loans protected under debt moratoria introduced when COVID-19 struck are in the vulnerable accommodation and food services sector, according to the Bank of Greece.

And despite shedding billions of euros of NPLs since the debt crisis, Greek banks still have the highest levels in the European Union, with 47.4 billion euros ($58 billion) of NPLs, or 30.2% of their portfolios, more than 10 times the EU average.

“For one entire year of operation, some hotels did not open so this is obviously affecting their books,” said Ioannis Hatzis, who owns three hotels on Rhodes and sits on the board of the country’s hoteliers federation.

“Any corporation that tried to grow in the past years and has actually increased debt will not be able to service it if tourism does not bounce back,” he said.

‘What money can you give us?’

The government has pumped in about 40 billion euros to help businesses and promised to withdraw support only gradually, but the tourism industry badly needs to get back to work.

After a decade of growth, it suffered its worst year on record in 2020, with just 7 million visitors compared with a record 33 million in 2019. The sector brought in revenue of 4 billion euros, less than a quarter of 2019’s 18 billion.

This year, as vaccines are rolled out, the authorities are counting on 40% of 2019 levels.

Greece opened its doors on Saturday, May 15, to tourists from the EU and other key markets such as the United States, Israel, and Britain, lifting the need for people to quarantine as long as they have been vaccinated or tested negative for COVID-19.

For companies such as Sea Dreams, which was already struggling with its debt before the coronavirus crisis, investment is on hold and another bad year could mean the end.

“It’s not worth going to the bank now because whatever you tell them, they say ‘OK, good, what money can you give us?'” said Kakas. “But we don’t have money to give you, we want you to give us money!”

Last year, Sea Dreams sold just 22,000 tickets for tourists hopping across to nearby islands, visiting Turkey or watching dolphins, down from 120,000 in 2019. Its revenue plunged 75% while its debt, which was halved to 3.5 million euros in two restructurings, is still weighing on its balance sheet.

Kakas took a 200,000-euro state subsidy to pay for taxes, repairs, and wages and he hopes there will be enough customers this summer to cover about 2 million euros in operating costs.

He depends on loans from friends and family to meet any extra cash needs and has considered running one boat under a foreign flag, such as Panama’s, to hire a cheaper foreign crew.

But without an influx of tourists, the measures can only limit the damage.

“Those who had problems with non-performing loans in the booming years of 2018 and 2019 have little chance of recovering this year,” said National Bank of Greece chief economist Nicholas Magginas.

‘Protect what I have’

While bad loan repayments have proceeded more smoothly than expected in the EU, the European Central Bank’s top supervisor Andrea Enria warned Greek banks this month the crisis was not over and lenders in general may be underestimating risks.

What’s more, while Greek banks have made progress in shifting loan risk off their balance sheets through the government’s Hercules scheme that runs until late 2022, the debt problem remains.

Hercules was launched in 2019 to help Greek banks offload bad loans by turning bundles of debt into asset-backed securities that can be sold to investors.

Credit servicers, which help collect and manage NPLs, oversee nearly 100 billion euros of Greek debt, half of which is in securitized loans offloaded by banks, said Tasos Panoussis, chairman of their association.

That’s likely to grow with more bad loan securitizations in the pipeline from major banks such as Alpha, National Bank, and Piraeus.

Panoussis, who is chief executive of Italian debt recovery firm doValue’s Greek subsidiary, said funds were looking for amicable solutions with borrowers through restructuring to get loans back on track.

Foreclosures were a last resort used only where borrowers were “completely uncooperative,” he said.

Part of the debt run up by Sea Dreams has been passed on to a debt fund and Kakas, whose business grew thanks to easy credit in the early 2000s, worries they may come after the collateral.

“I’m not working to make money but to protect what I have,” he said. “I’m optimistic in the sense that the bank wants to get its money. If it forces me out of work, it won’t get anything.” – Rappler.com