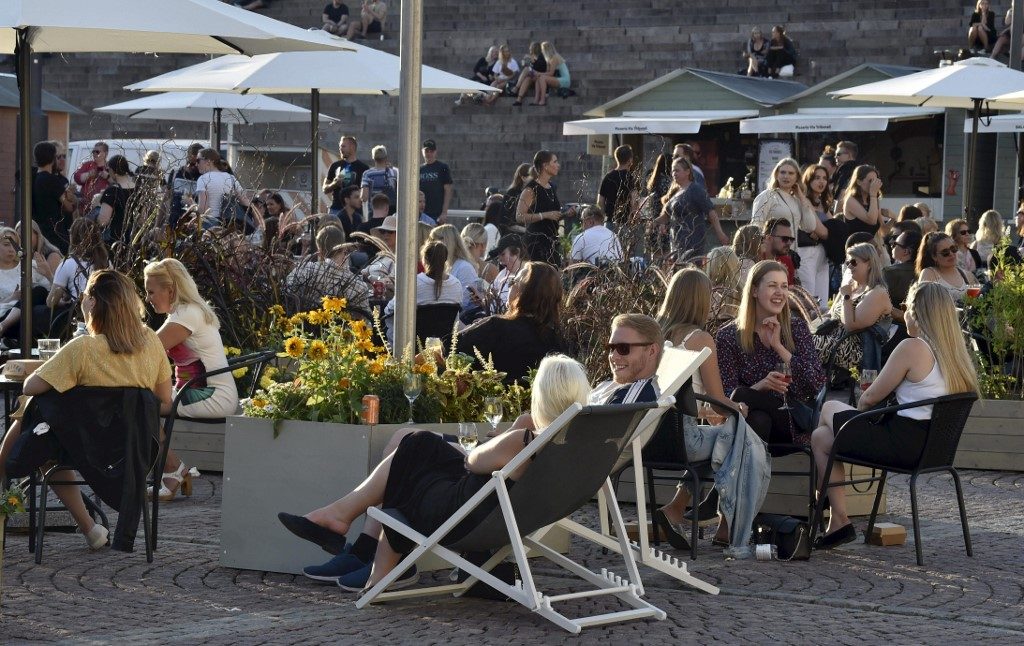 NO RESTRICTIONS. People enjoy meals and drinks at a large open-air food court in Senate Square in Helsinki, Finland, on July 17, 2020.

Facebook Twitter Copy URL
Copied
Finland posts economic growth of 3.3% in the 3rd quarter of 2020, as it avoids many of the harsher restrictions seen elsewhere in Europe

The Nordic country, which has maintained one of Europe’s lowest incidences of COVID-19, beat the forecast of 2.6% growth during the 3rd quarter.

“Both the collapse in the 2nd quarter and the recovery from it in the 3rd quarter were more moderate in Finland than in the EU area,” Statistics Finland said in a statement.

Finland’s 2nd quarter contraction was also revised from 4.5% to 3.9% on the previous quarter.

By comparison, the eurozone – of which Finland is a member – saw overall GDP reduced by 15% during the period, according to Eurostat, weighed down by particularly sharp falls in France, Italy, and Spain.

Finland has so far registered over 23,000 coronavirus infections and 393 deaths in the country of 5.5 million people, and since May has avoided many of the harsher restrictions seen elsewhere in Europe.

Businesses and schools have remained open and there are few restrictions on movement within the country’s borders.

“It’s nearly certain that the eurozone will contract noticeably in Q4 but in Finland we’re expecting it closer to zero,” Appelqvist said, adding that consumer behavior has remained less impacted by the virus than in worse-hit countries.

The country’s 3rd quarter GDP contracted by 2.7% on the same period in 2019, with the country’s export-dependent economy particularly hit by the economic crisis across Europe.

However, on Thursday, November 26, Prime Minister Sanna Marin warned that the virus has “worsened rapidly” in Finland in recent days, especially in the capital region, and refused to rule out a return to the strict controls introduced in March when a state of emergency was introduced and travel in and out of Helsinki forbidden. – Rappler.com