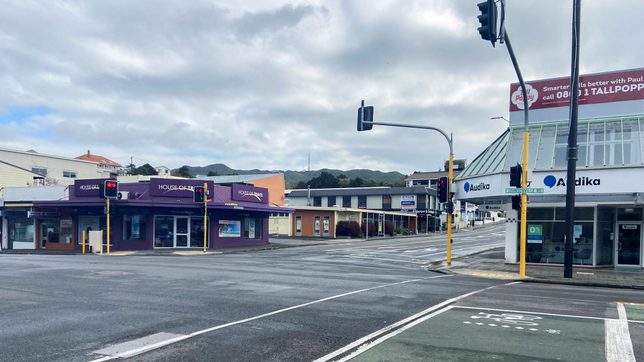 LOCKDOWN. An empty street is seen as a lockdown to curb the spread of COVID-19 remains in place in Wellington, New Zealand, August 20, 2021.

New Zealand’s economy grew at a much faster pace than expected in the second quarter, officials said on Thursday, September 16, reinforcing views that the central bank will start raising interest rates despite a recent outbreak of the coronavirus.

Gross domestic product (GDP) surged 2.8% in the three months through June, Statistics New Zealand said, well ahead of a Reuters poll forecast of a 1.3% increase and the Reserve Bank of New Zealand’s (RBNZ) estimate of 0.7%.

The growth surge follows a drop in unemployment in the second quarter to an 18-month low of 4% and a rise in annual inflation to 3.3%, above the central bank’s 1% to 3% target range.

“We expect the RBNZ to ‘look through’ near-term volatility and reduce monetary stimulus, with a series of 25-basis-point [rate] hikes starting from next month,” said Mark Smith, senior economist at ASB Bank.

The central bank delayed raising rates last month after the country was put into a snap COVID-19 lockdown over an outbreak of the Delta variant of COVID-19 in Auckland, but said a hike was still on the cards.

The market has already priced in a 100% chance of a 25-basis-point hike at the next central bank meeting on October 6.

Annual GDP jumped 17.4% from a very weak base as the country was in a complete COVID-19 lockdown in the second quarter last year. A Reuters poll had expected a 16.3% rise.

Second-quarter growth was driven by the tourism sector, after the country opened a trans-Tasman travel bubble with Australia.

New Zealand has rebounded strongly from a recession last year, largely due to its success in eliminating the coronavirus within its borders and reopening its domestic economy well before other advanced nations.

The country had been virus-free for months until an outbreak of the highly infectious Delta strain in August. The biggest city Auckland remains in lockdown, but the rest of the country has opened up again. The travel bubble with Australia, however, has been suspended.

Economists expect growth to contract in the third quarter due to the Delta-driven lockdown, but forecast a rapid recovery as vaccinations increase and the outbreak is contained.

“Given that the economy was running hot going into the lockdown in August, the prospect of another V-shaped rebound becomes more likely,” said Michael Gordon, acting chief economist at Westpac Bank.

The country recorded 13 new cases of COVID-19 on Thursday, taking the total number of cases in the latest outbreak to 979. – Rappler.com