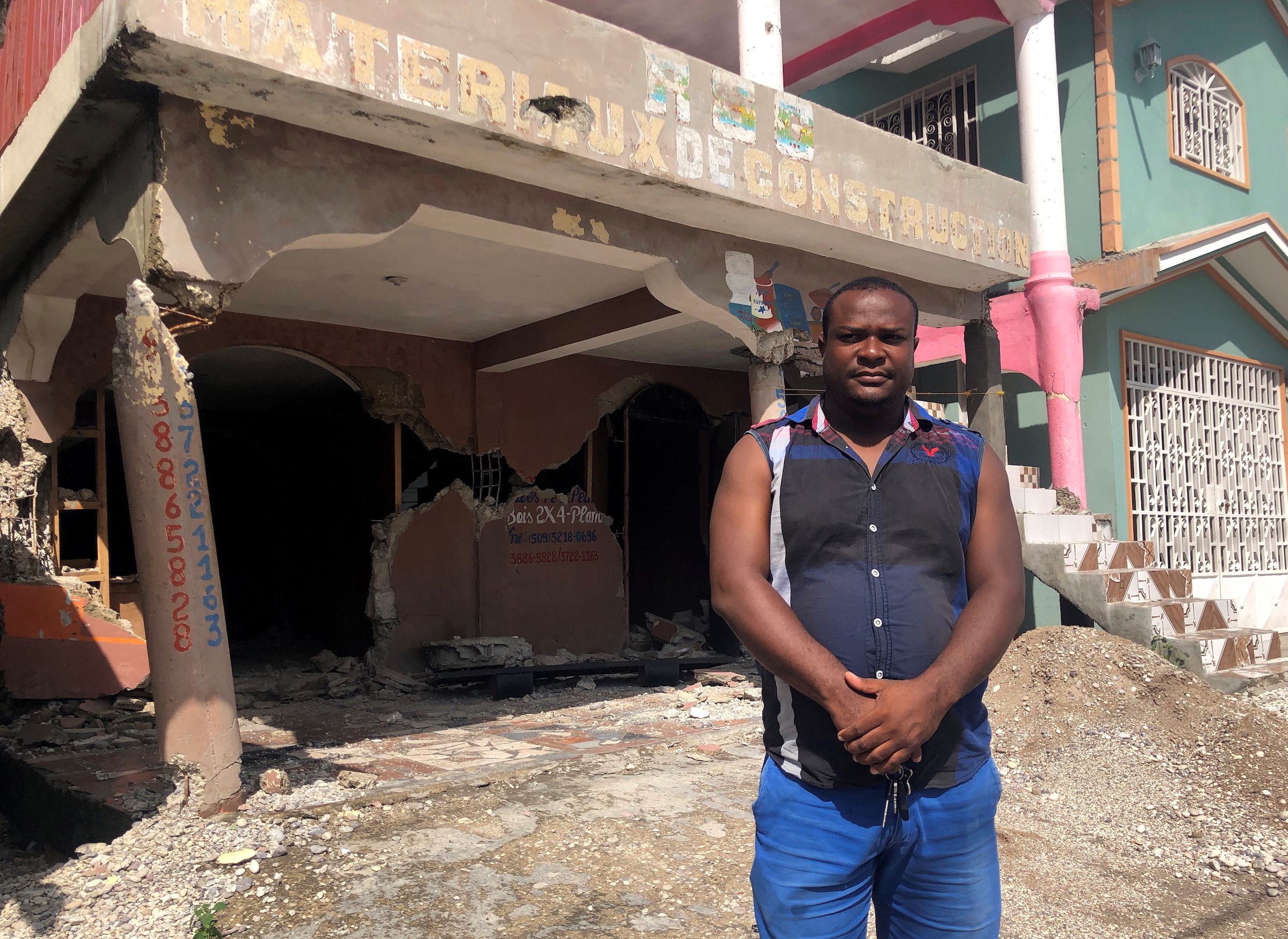 SHOP NO MORE. Rosemond Clermont poses for a photo outside his contruction business that was destroyed in a magnitude 7.2 quake, in Les Cayes, Haiti, August 18, 2021.

Facebook Twitter Copy URL
Copied
'The economic situation is so much worse than before,' says the owner of a small construction shop in earthquake-hit Haiti

Days before a powerful earthquake struck, Rosemond Clermont paid the $1,554 rent on the office of his construction business in southern Haiti for the rest of the year.

On Saturday morning, August 14, the investment vanished when his small shop collapsed along with hundreds of other buildings in his hometown as the coastal city of Les Cayes began crumbling.

“I don’t know what to do. I’m still in shock,” said Clermont, 36, the main breadwinner for a family of four.

Dozens of businesses ranging from hotels, restaurants, to corner shops in downtown Les Cayes and surrounding areas suffered a similar fate, with premises either badly damaged or flattened.

He opened the construction business four years ago with the help of a bank loan worth $5,180 to supplement another job at a cell phone service provider, worried that he otherwise would not be able to feed his wife, daughter, 4, and 1-year-old son.

The loan saddled Clermont with a monthly debt of $207 that he is struggling to pay off.

“The economic situation is so much worse than before,” he said. “I owe money to the bank, we have nowhere to sleep, and I have my family to feed.”

Since a devastating earthquake that killed tens of thousands of people in 2010, Haiti’s economy has been buffeted by chronic political instability, drought, and a major hurricane in 2016.

Opposition-backed protests against the government dragged Haiti into recession in 2019 before the coronavirus pandemic even hit, and a steady deprecation in the gourde currency has put pressure on businesses heavily reliant on foreign imports.

Haitian economist Etzer Emile told Reuters that in the past, small businesses have been overlooked in post-disaster responses.

“And that’s the big mistake,” he said. “Because these entities are the very backbone of the national economy.”

Clermont’s family has been spending nights in the car since the earthquake, scared of possible structural damage at their home after they watched the walls shake violently.

The entire facade of Clermont’s office has gone, and as he stood outside the now empty shell, he warily kept his distance from the battered building lest it crumble further.