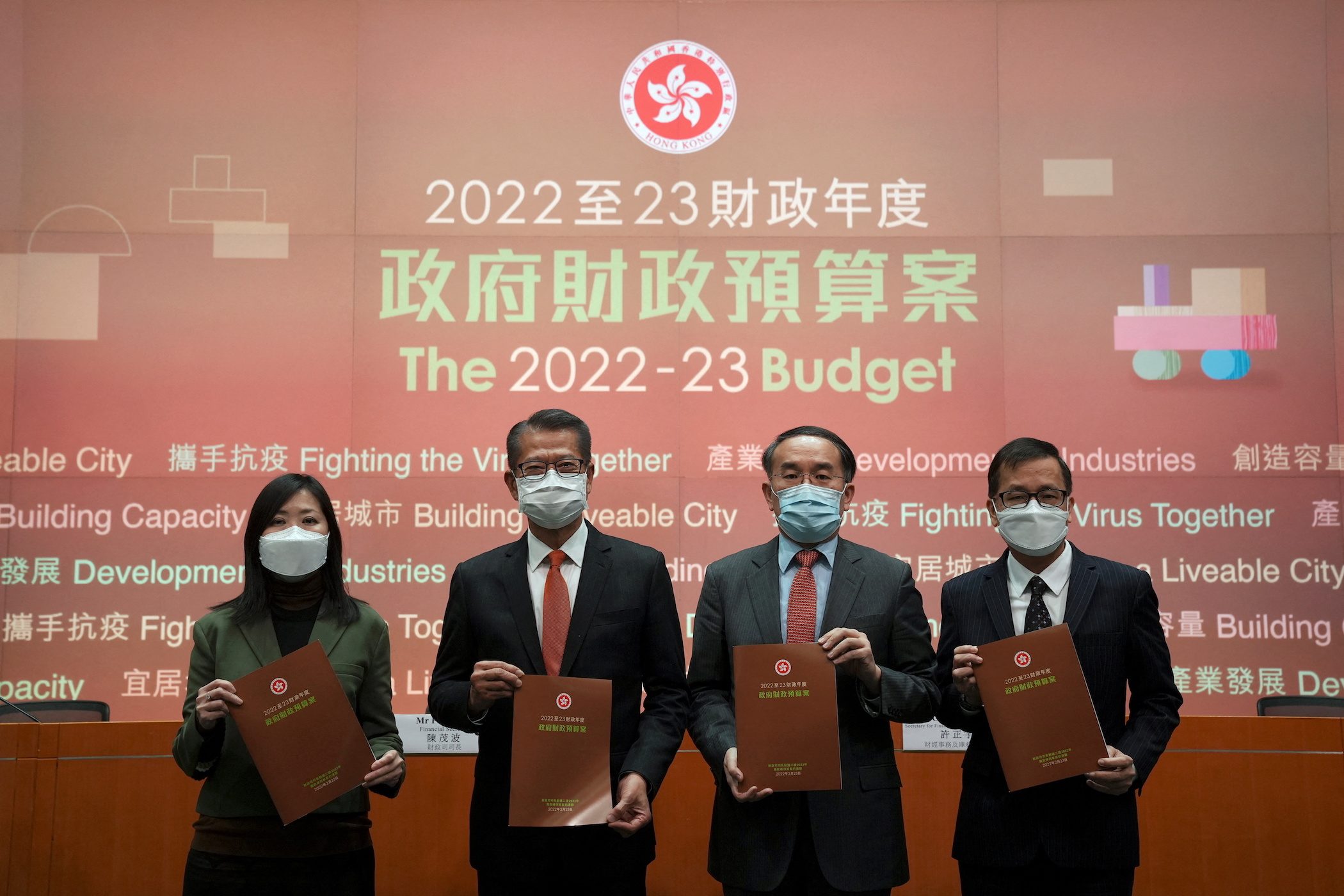 HONG KONG – Hong Kong will offer tax breaks, handouts, and subsidies to small businesses and residents, to mitigate the impact of the most stringent social restrictions imposed in the city to curb the spread of COVID-19, Finance Secretary Paul Chan said.

The 2022-2023 budget proposals were announced as hundreds of bars, restaurants, and small retailers warned they were months away from closure, and shopping malls were deserted while the city endured its worst COVID-19 outbreak so far.

“Hong Kong is currently experiencing its hardest time in the fight against the epidemic, and we are facing enormous challenges,” Chan told legislators via videoconference on Wednesday, February 23.

Hong Kong usually runs balanced budgets or surpluses, since its pegged currency system commits it to fiscal prudence, but still has ample reserves.

Fiscal reserves are estimated at HK$940 billion at the end of the government’s current term in June, and are expected to grow above HK$1 trillion in the coming five years.

The global financial hub has doubled down on its “dynamic zero-COVID” strategy, which aims to eradicate all outbreaks, following mainland China’s lead even as the rest of the world adjusts towards “living with the virus.”

Given the city is facing thousands of infections a day and the numbers are growing, some analysts predict at least one or two quarters of economic contraction after recovering last year from the city’s most prolonged recession in 2019-2020.

Bars, gyms, beauty parlors, and 12 other types of venues are closed, while restaurants cannot operate beyond 6 pm. Apart from grocery stores, most shops are deserted as residents are back working from home. The border is virtually shut with the finance sector complaining this has caused an exodus of talent and made operating a regional hub out of Hong Kong difficult.

The restrictions will last until at least April 20.

The budget measures include a 100% reduction in salaries tax, capped at HK$10,000, handouts of HK$10,000 consumption vouchers, financial aid for the unemployed, and subsidies for directly impacted businesses.

Residents will get tax deductions related to rent payments, as well as subsidies for transport and utilities.

A 100% reduction in profits tax capped at HK$10,000 is expected to benefit 151,000 firms, Chan said. In addition, the government will help companies with loan guarantees, export financing, and debt repayment holidays.

New legislation will be introduced to prevent landlords from terminating rents of struggling firms for up to six months.

Funds worth HK$1.26 billion will be given to firms in the tourism industry, reeling from two years of inactivity with no near-term prospects of recovery.

Hang Seng Bank chief economist Thomas Shik said the measures will ease pressure on the economy in coming months but he might still cut his 3.3% growth forecast for 2022.

“We are reviewing the situation…given the impact of Omicron as well as the uncertainty from external factors,” Shik said.

The “anti-epidemic” measures include HK$22 billion to boost COVID-19 testing capacity, HK$6 billion for vaccines, and HK$12 billion to build more health facilities, among others.

Hong Kong’s economy is expected to grow 2% to 3.5% this year after expanding 6.4% in 2021, Chan said, adding the forecast takes into account a recovery in the second part of the year once the epidemic is brought under control.

“The successful control of the epidemic is the key to safeguarding our economy and people’s livelihood,” Chan said. – Rappler.com