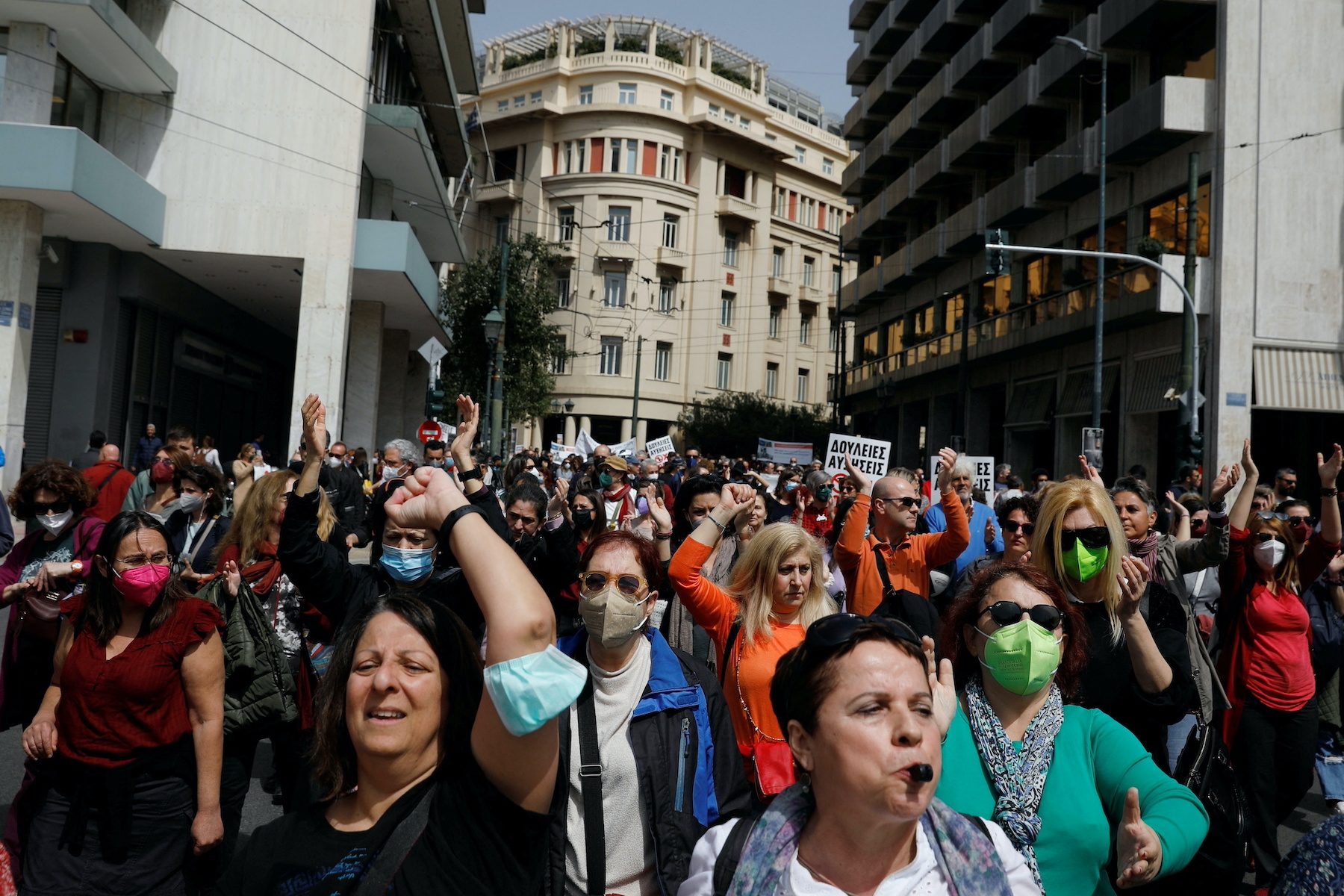 PROTEST. People shout slogans as they take part in a protest during a 24-hour strike over high prices and low wages, in Athens, Greece, April 6, 2022.

The global lender will downgrade its growth outlooks for 143 economies representing 86% of global economic output, although most countries will maintain positive growth, Georgieva said in a “curtain raiser” speech ahead of new forecasts to be released at next week’s IMF and World Bank spring meetings.

Georgieva, who previously flagged a likely downgrade, said Russia’s invasion of Ukraine was “sending shockwaves throughout the globe” and dealing a massive setback to countries struggling to recover from the still-raging COVID-19 pandemic.

“The root cause of what we face today is the war, and it is the war that must end,” Georgieva said in remarks to the Carnegie Endowment for International Peace in Washington. “In economic terms, growth is down and inflation is up. In human terms, people’s incomes are down and hardship is up.”

Western sanctions imposed on Russia reflected “a global order that has been severely impacted,” she added, warning of a major new threat, the fragmentation of the global economy into geopolitical blocs, with differing trade and technology standards, payment systems, and reserve currencies.

She said the war was also aggravating food insecurity across the globe, given disruptions to grain and fertilizer supplies from Ukraine, Russia, and Belarus that are driving up food prices and hitting the weakest countries the hardest.

Without urgent, coordinated action to bolster food supplies, many countries face more hunger, poverty, and social unrest, she said. It was also imperative to improve longer-term resilience by diversifying agricultural production, much as vaccine production was spread out regionally during the pandemic.

The IMF anticipates that inflation, now a “clear and present danger” for many economies, will remain elevated for longer than previously expected.

Georgieva did not provide a specific target for global growth, but has said previously it would be lower than the 4.4% the IMF forecast in January, a figure already reduced by half a percentage point from the Fund’s prior forecast due to lingering supply chain disruptions caused by the pandemic.

“Since then, the outlook has deteriorated substantially, largely because of the war and its repercussions,” she said. “Inflation, financial tightening, and frequent, wide-ranging lockdowns in China – causing new bottlenecks in global supply chains – are also weighing on activity.”

The threat of fragmentation

Georgieva warned that fragmentation of the global economy was the biggest threat to the post-World War II, US-led economic order governed by the IMF, the World Bank, and other institutions created at the end of that conflict.

“Such a tectonic shift would incur painful adjustment costs. Supply chains, R&D, and production networks would be broken and need to be rebuilt,” she said. “Poor countries and poor people will bear the brunt of these dislocations.”

The shift is already impairing the world’s ability to work together to resolve the Ukraine war and COVID-19 crises and threatens to derail cooperation on climate change and other challenges, she said.

She urged continued faith in coordinated action to address shared problems such as climate change and rapid technological change.

“Complex doesn’t mean impossible…. We have to remember that the answer need not be in isolation and fragmentation,” she said, noting that the integration seen after the end of the Cold War had resulted in a tripling of the size of the global economy and sharp reductions in poverty for some 1.3 billion people.

US Treasury Secretary Janet Yellen raised similar concerns on Wednesday, April 13, about a “bipolar” global economy with the United States and democratic allies on one side, and China and other state-led economies on the other. – Rappler.com