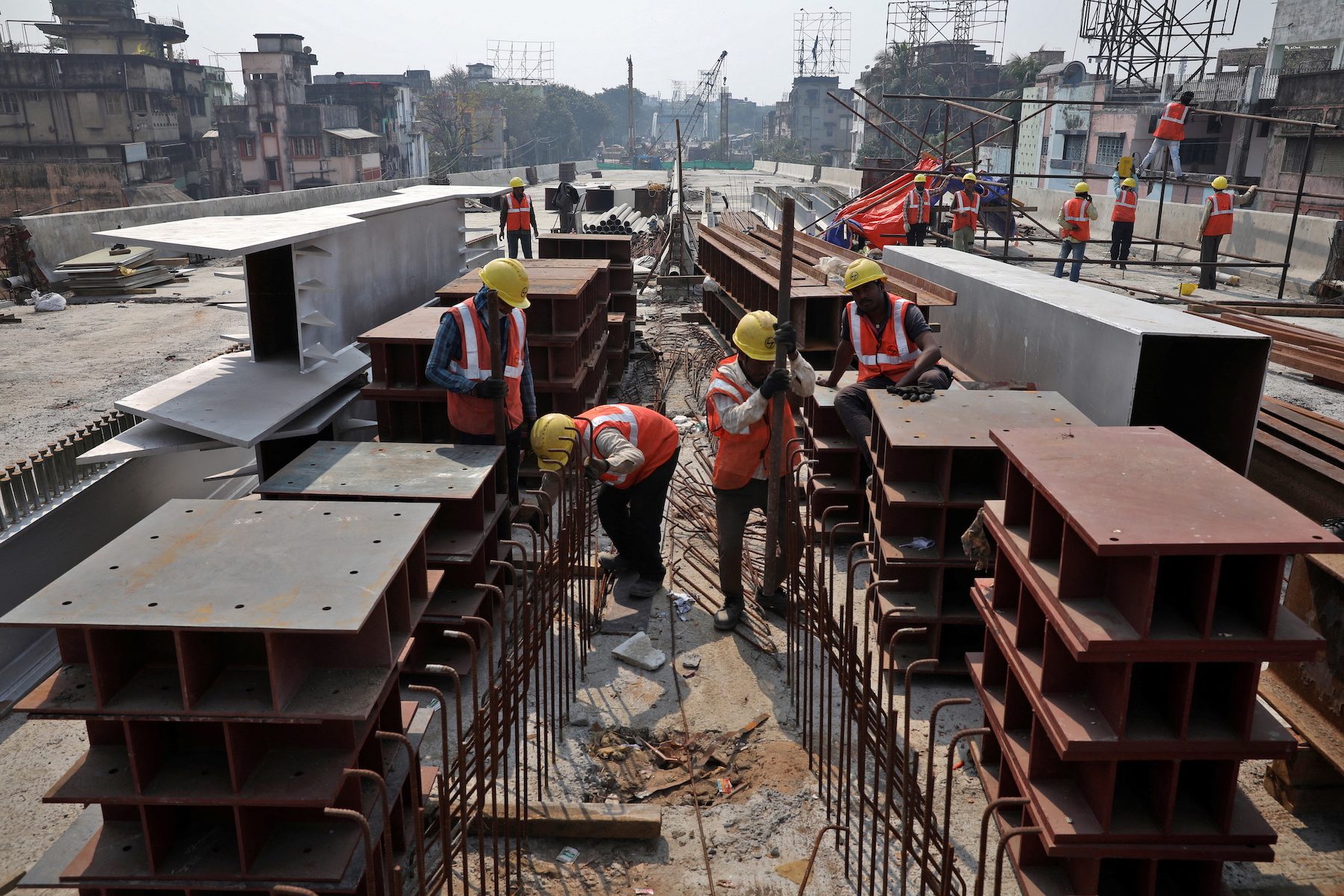 INFRASTRUCTURE. Laborers work at the site of an under-construction flyover in Kolkata, India, February 1, 2022.

NEW DELHI, India – India’s government will step up spending to 39.45 trillion rupees ($529.7 billion) in the coming fiscal year to build public infrastructure and drive economic growth, it said on Tuesday, February 1, but it involves a wider fiscal deficit than targeted and record borrowing.

Asia’s third largest economy has been on the mend after the government lifted mobility measures in June to curb the spread of the coronavirus, after contracting 6.6% in the previous fiscal year.

Finance Minister Nirmala Sitharaman, presenting the annual budget to parliament, said total government spending in the 2022-2023 fiscal year beginning in April will be 4.6% more than the current year.

Trillions of rupees will be allocated to expressways, affordable housing, and solar manufacturing to put growth on a firmer footing, she said.

The recovery from the pandemic has been swift but incomplete, officials say. Private consumption has been hampered by a lack of jobs, depleted household balance sheets, and wider income inequalities.

“The economy has shown strong resilience to come out of the effects of the pandemic with high growth. However, we need to sustain that level to make up for the setback of 2020-21,” she said.

She announced spending of 200 billion rupees ($2.68 billion) for a highway expansion program and said 400 new trains would be manufactured over the next three years.

The fiscal deficit for the current year would be 6.9% of gross domestic product (GDP), slightly more than the 6.8% targeted earlier, Sitharaman said, drawing concern in the bond market.

For the next fiscal year, Prime Minister Narendra Modi’s government is targeting a deficit of 6.4% of GDP, hoping to build on higher tax revenues and privatization of state firms including a share sale of giant insurer Life Insurance Corporation.

“It’s a big bang budget, but depends on where one stands on the bang perimeter. The massive ramp-up of capital spending and focus on infrastructure cements the budget’s credentials as a firmly growth-oriented one,” said Aurodeep Nandi, India economist and vice president at Nomura.

Gross borrowing for 2022-2023 was raised 40% to 14.95 trillion rupees. Gross borrowing by the Modi government has more than doubled during the pandemic as New Delhi went on a spending spree to cushion the economy and provide relief to the poor.

“Despite the higher than expected growth, we still saw a fiscal deficit that was wider than what was budgeted. That continues to demonstrate the risks that are still ongoing from the pandemic,” said Christian de Guzman, senior vice president at Moody’s Investors Service.

Stocks were higher on the growth-oriented budget with the blue-chip NSE Nifty 50 stock index gaining 1.37% and the S&P BSE Sensex adding 1.46%.

The government sharply scaled back its plans to sell state-run companies after political criticism and market turmoil, expecting to raise 650 billion rupees from the privatization program next fiscal year, lower than the revised 780-billion target for the current fiscal year.

Initially, it had announced it would raise 1.75 trillion rupees this fiscal year. After years of efforts the government succeeded in selling loss-making carrier Air India last month, but failed to move forward on other companies and banks identified for sale.

Sitharaman also said the central bank would introduce a digital currency in the next fiscal year using blockchain and other supporting technology.

India’s central bank has voiced “serious concerns” around private cryptocurrencies on the grounds that these may cause financial instability. – Rappler.com