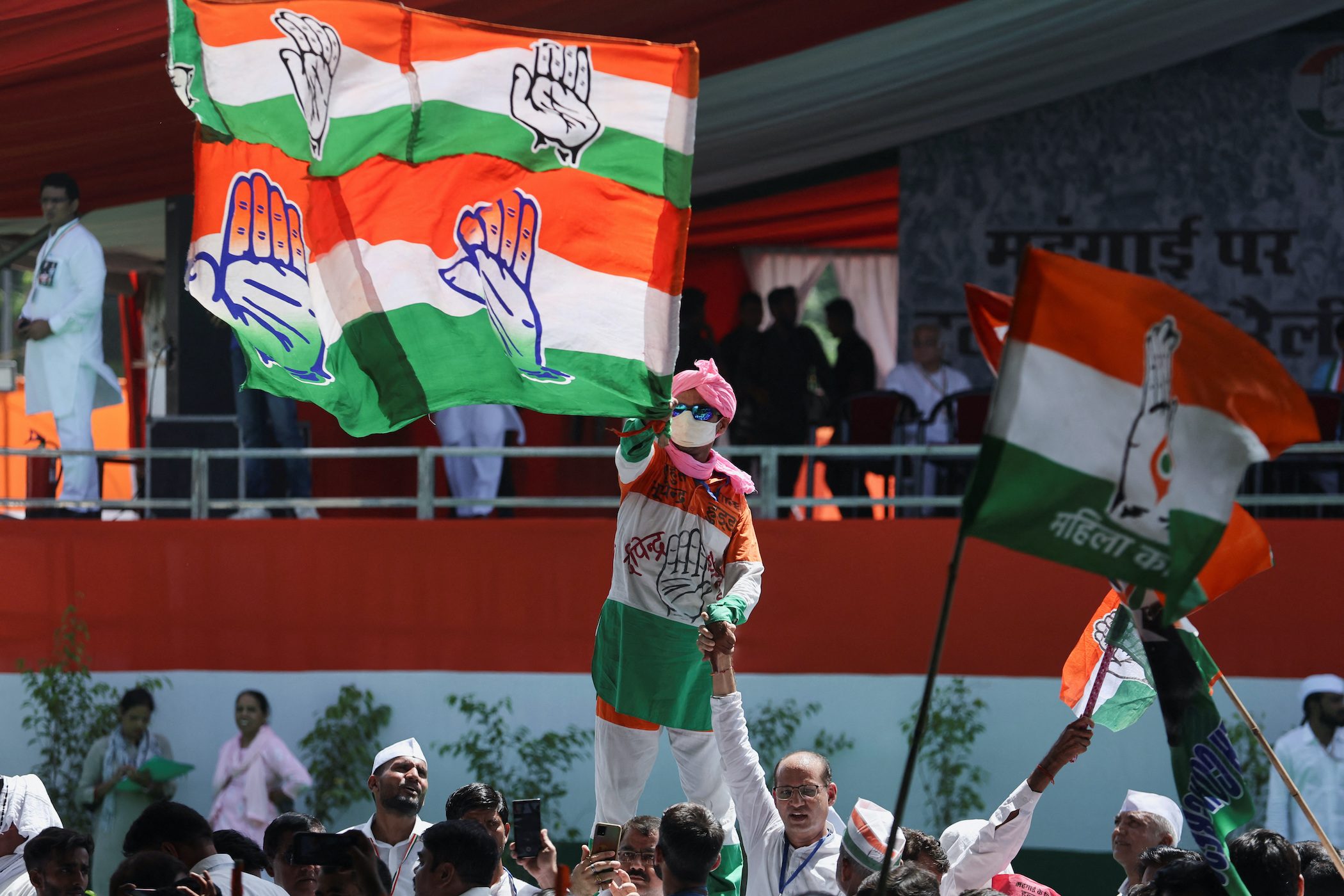 OPPOSITION RALLY. A supporter waves a flag of India's main opposition Congress party at a massive rally organized by the party against inflation, at Ramlila Ground, in New Delhi, India, September 4, 2022.

At least 10 Indian states have announced over 1 trillion rupees ($12.6 billion), mainly in cash transfers and electricity subsidies, for households to combat inflation, according to government officials.

Local politicians are worried about the impact of sharp increase in prices on household essentials. For example, food inflation, which accounts for nearly 40% of the consumer price index basket, rose 7.62% year on year in August compared to a revised 6.69% in July, the National Statistics Office said on Monday, September 12.

The southern Indian state of Kerala distributed a package of free food items costing about 450 rupees ($5.70) each to over 8 million families during the Onam festival earlier this month. Also a 1,000 rupee additional rural job guarantee program for over 500,000 workers was announced.

In the northern state of Punjab and national capital Delhi, the ruling Aam Aadmi Party recently announced 300 kilowatt-hours of free electricity per household and free travel for women on state buses, while promising such measures in other states if it comes to power in state elections later this year.

Last week, in the state of Rajasthan, ruled by the Congress party, the state government announced a jobs guarantee program for urban poor as part of its relief measures for households.

Also, “the state government has announced free electricity supply of 50 units of electricity every month to all households,” Ashok Gehlot, the state chief minister, said on Saturday, September 10, citing increasing economic stress due to rising prices.

A study by the research department of the Reserve Bank of India (RBI) in June estimated that nine states in their annual budget this year said that 0.1% to 2.7% of state gross domestic product went to free items and services for citizens.

The study warned that fiscal conditions of some debt-ridden states could deteriorate in the coming years due to increased spending on subsidies.

Opposition leaders said that despite an increase in interest rates by the central bank and fuel tax cuts by the federal government earlier this year, nearly half of the country’s 1.4-billion population are facing a surge in living costs amid little growth in income.

“We have cut down the use of cooking gas and vegetables due to rising prices,” said Jessy George, 40, a housewife in the Kottayam district of Kerala.

Cooking gas prices have more than doubled in the last two years, while transport costs rose more than 40%, but she said that her husband’s income has remained same.

Gireesh Kumar, 38, a mason with a wife and two school-age children, said he had to borrow 10,000 rupees this month as he failed to save sufficiently due to rising prices.

“I am planning to shift my children from private school to government school as I will not be able to afford the fees,” he said. Annual consumer inflation rose to 7% in August, remaining above the tolerance band of the RBI’s 2% to 6% for a ninth straight month, and is projected to remain above 6% until March 2023.

“Common people need urgent relief. It is essential for every government to help them,” said Prasanna Acharya, a leader of Biju Janata Dal, ruling the state of Odisha. – Rappler.com