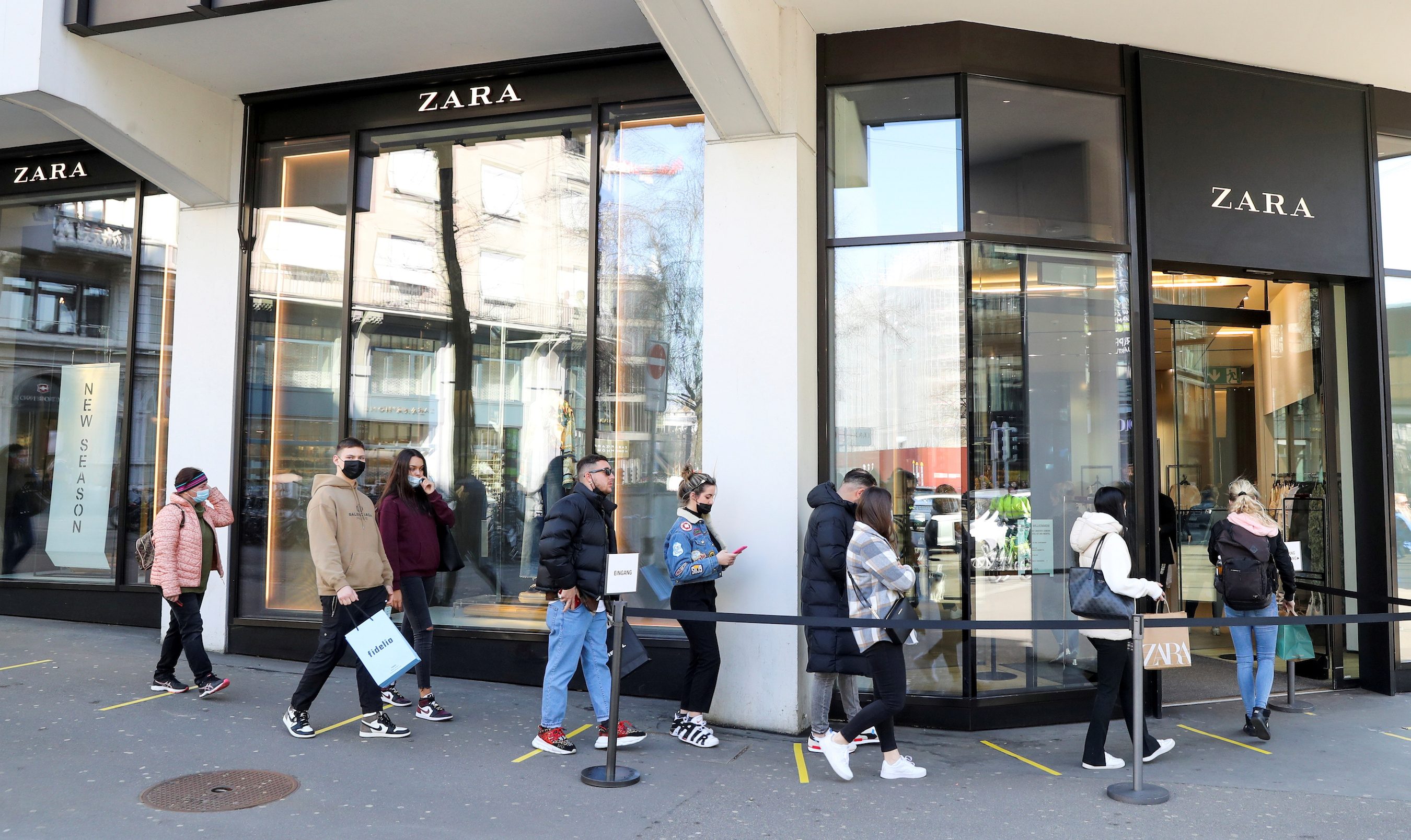 ZARA. Shoppers queue in front of a reopened Zara clothing store at the Bahnhofstrasse shopping street in Zurich, Switzerland, March 1, 2021.

Facebook Twitter Copy URL
Copied
Inditex's net profit plummets 70% in 2020. Around 15% of its stores worldwide are still closed due to COVID-19 restrictions as of early March 2021.

Zara owner Inditex forecast healthy sales as soon as lockdowns are lifted, after the coronavirus crisis knocked its net profit to 1.1 billion euros ($1.31 billion) in 2020, a drop of 70% on the previous year.

Inditex said on Wednesday, March 10, that it hoped that nearly all of its 6,829 shops worldwide would reopen by mid-April, with around 15% still closed due to COVID-19 restrictions as of March 8.

“As soon as the stores reopen, the level of sales becomes very healthy,” chairman Pablo Isla said on a conference call.

Zara’s website shows a new collection rife with knitwear, bodysuits, and baggy shirts for women and casual vests and jeans for men, suited to the continued working-from-home lifestyle.

The impact of lockdowns was clear in the 4th quarter when net profit fell 53% to 435 million euros on sales of 6.3 billion euros, a steeper drop than the 26% in the 3rd quarter, as restrictions came back into force across much of Europe.

Strong online sales, up 77% from the previous year, partly cushioned the company’s performance, coupled with tight inventory management which Inditex said had enabled it to serve customers from in-store stock.

Nevertheless, total sales for the year were down 28% to 20.4 billion euros, with a 25% drop in the 4th quarter at Inditex, which is the owner of 8 brands including Massimo Dutti and Bershka as well as its flagship Zara.

Although the results were worse than expected by analysts polled by Refinitiv, who expected a quarterly net profit of 602 million euros and full-year net profit of 1.3 billion, the Spanish retailer outperformed competitor H&M.

The Swedish clothing company, which is due to report December-January sales next week, posted an 88% profit drop in its results in January. Clothing sales at Inditex’s brands, as well as at H&M and Next, began to register a slow recovery by autumn last year from record lows when the COVID-19 pandemic first struck, boosted by online shopping and a quick rebound in China.

But in the United States and Europe, a return to pre-COVID-19 sales has been frustrated by lockdowns extending well into 2021 and slow vaccine rollouts in many countries.

Some 30% of its stores were closed on January 31, when Inditex’s fiscal year ended, and 52% were under restrictions.

Inditex said it had rolled out its radio frequency technology, attached as a chip to the alarm on clothing to keep track of stock, across all its brands this year, keeping inventory down 9% on the year despite rocky sales.

The company returned to its ordinary dividend policy of a 60% payout and bonus dividends to be paid in May and November 2021 after postponing its payment last year.

Inditex has so far closed 751 of the 1,200 stores it plans to shut by the end of the year in favor of flagship locations from which it can serve both online and in-person customers.

Isla said it does not foresee closing a “relevant” number of additional stores once these closures are completed. – Rappler.com