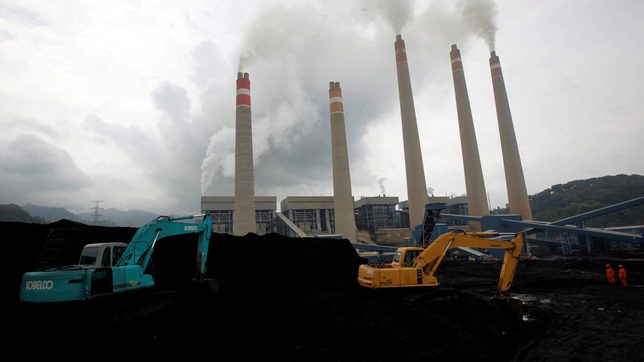 Facebook Twitter Copy URL
Copied
During the impasse over exports, around 100 vessels either loading or waiting to load coal have amassed near Indonesia's main coal ports off Kalimantan

JAKARTA, Indonesia – Indonesian authorities on Wednesday, January 5, postponed a meeting with coal miners to discuss a ban on coal exports, as scores of ships moored off the coast due to load remained in limbo.

The world’s top exporter of thermal coal and China’s largest overseas supplier on Saturday, January 1, announced a ban on exports in January to avoid outages at its own generators.

Indonesian authorities said they would review the export suspension on Wednesday, which if prolonged could threaten energy security in some of the world’s biggest economies.

China’s benchmark thermal coal futures rose by as much as 7.8% on Tuesday, January 4, in the first day of trading since the policy was announced, before paring gains on Wednesday. The futures were last traded at 702 yuan a ton, down 1.3%.

ICE Newcastle monthly coal futures also jumped sharply when trading resumed on Tuesday, registering their largest one-day gain since November 3 and topping $174 a ton for the first time since October.

Coal miners had been scheduled to meet Indonesian trade minister Muhammad Lutfi on Wednesday morning, but talks did not take place, officials at the Indonesian Coal Mining Association (ICMA) said. They said no new meeting time had been agreed. Ministry officials declined to comment.

It was unclear why the meeting was postponed.

“We will clearly map out the condition in each coal power plant, so later on we won’t find any more problems,” Erick said late on Tuesday.

The meeting with PLN might take place on Wednesday evening followed by talks between the energy ministry and miners, an official at the Energy and Mineral Resources Ministry said.

The utility said as of Wednesday it has secured contracts for 13.9 million tons of coal, but needed more to reach safe stock level.

During the impasse over exports, around 100 vessels either loading or waiting to load a total of around 5.9 million tons of coal have amassed near Indonesia’s main coal ports off Kalimantan, Refinitiv data shows. This includes around 25 vessels waiting off the port of Samarinda and 27 off Taboneo.

“We have not seen any shipments…loaded after 31st December,” said a trader in India’s Western Gujarat state.

PLN on Tuesday said it had secured an extra 7.5 million tons of coal, but aimed to continue increasing stockpiles so it had at least enough supplies to last 20 days. Indonesia’s Tangguh and Bontang gas plants are committed to selling 58 cargoes of liquefied natural gas to PLN in 2022, regulator SKK MIgas said on Wednesday. Indonesian President Joko Widodo this week called on LNG producers and coal miners to prioritize domestic market needs.

State coal miner PT Bukit Asam on Wednesday said ICMA and the trade ministry has submitted to the energy ministry names of companies that had fulfilled their domestic market obligations “in which it is proposed to lift the export ban for such companies.”

Those obligations require miners to sell 25% of their output to local power plants at a maximum price of $70 per ton. – Rappler.com