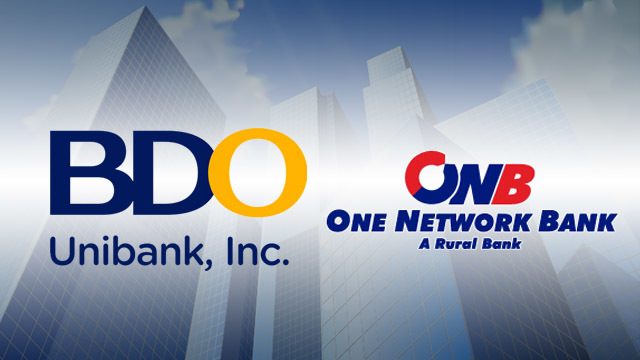 MANILA, Philippines – BDO Unibank Incorporated has completed the takeover of the largest rural bank in the Philippines.

The bank has acquired 99.59% of the outstanding capital stock of Davao City-based One Network Bank Incorporated (ONB) through the completion of a share swap transaction on Wednesday, July 21, BDO corporate information officer Elmer Serrano said in a disclosure to the stock exchange. (READ: BDO eyes Mindanao expansion through ONB buyout)

“The acquisition of ONB expands the regional presence of BDO in the country, particularly in its target market in the southern Philippines and opens up business lines for BDO,” Serrano said.

BDO president and CEO Nestor Tan earlier said the acquisition offers access to Mindanao and Visayas that are not yet fully penetrated by the SM Group’s universal bank.

“It’s more to take advantage of economic growth in the provincial areas. They are relatively under-served,” Tan said.

BDO was originally known as Acme Savings Bank before it was acquired by the SM Group in 1976. In May 2007, BDO merged with Equitable PCI Bank to form the country’s biggest bank.

ONB went through the consolidation of 3 of the most profitable rural banks in the country: Rural Bank of Panabo, the Consunji-led Network Rural Bank (Davao), and Provident Rural Bank of Cotabato in 1996.

BDO crossed in favor of the selling shareholders of ONB a total of 64.5 million listed common shares and issued an equal number of new shares from its unissued capital stock in a top-up and borrowing transaction with a substantial BDO shareholder.

In closing its acquisition of ONB, BDO conducted a tender offer to the minority shareholders of ONB in compliance with the requirements of the Securities and Exchange Commission (SEC). ONB is deemed a public company with over 1,700 shareholders.