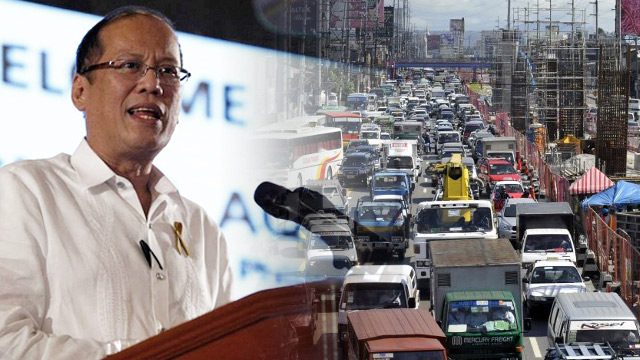 Facebook Twitter Copy URL
Copied
Instead of discussing actions to prevent delays in the implementation of public-private partnership projects, President Aquino asks for public's understanding in his last State of the Nation Address

MANILA, Philippines – Although he highlighted victories in the government’s public-private partnership (PPP) thrust, President Benigno Aquino III did not make any promises to hasten the implementation of infrastructure deals and ensure delays will not plague the construction of such projects. (READ: PH’s PPP thrust: Work in progress)

In his final State of the Nation Address (SONA) Monday, July 27, Aquino opened his speech by noting July 24’s inauguration of the Muntinlupa-Cavite Expressway (MCX) – the first PPP deal completed in his term.

The P2.01-billion ($44.44-million) MCX (formerly called Daang-Hari South Luzon Expressway Link Road) was awarded to Ayala Corporation in December 2011. But it was only on July 24 when it was opened to motorists. The government received a premium of P925 million ($20.31 million) from this PPP project.

MCX is one of the 5 PPP projects the Aquino administration targets to complete by mid-2016.

The other 4 projects are the following:

Status: 9,053 classrooms delivered or 97% completed as of July 27; target completion in September

Status: More than 1,000 classrooms delivered or 32.72% completed as of July 27; target completion in December 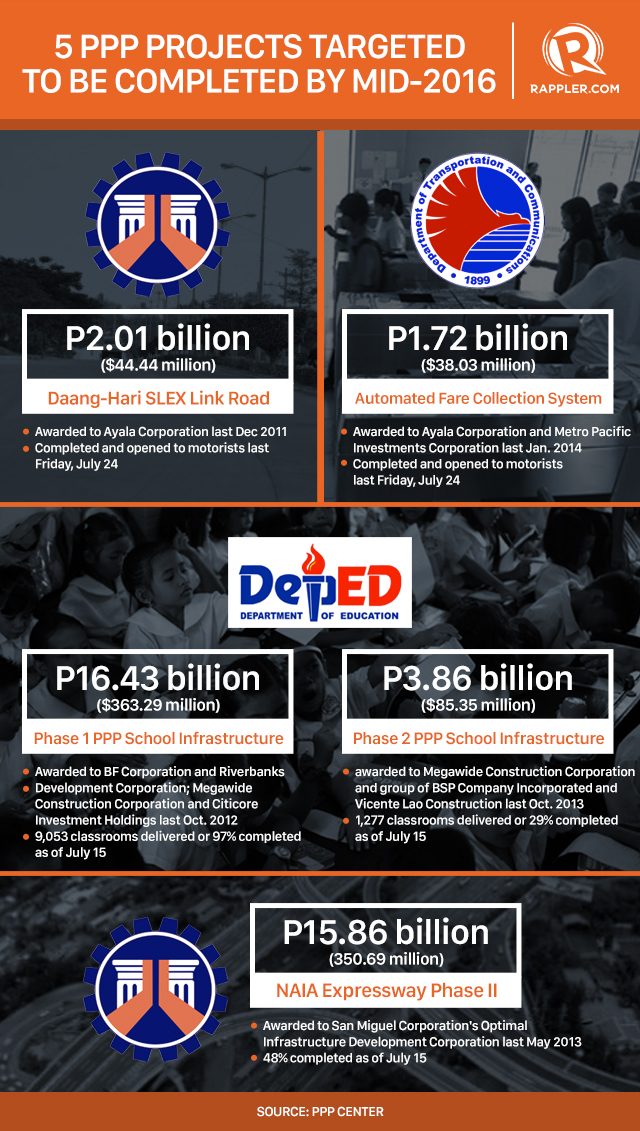 In praise of PPP Center

In his speech, Aquino praised the PPP Center, headed by executive director Cosette Canilao, for the faster roll out of projects compared to the past 3 administrations. (READ: Aquino: More PPP projects awarded than past 3 admins)

Since its inception in 2010, PPP’s pace has been criticized as slow.

Instead of discussing ways to prevent delays in the implementation of the PPP projects, Aquino asked for the public’s understanding.

But the government admits that the country’s PPP thrust is a work in progress.

“It’s not perfect but it’s way better than where we started,” PPP Center’s Canilao told Rappler. “I can say it would be easier for the next [administration] as we created a template on how they can work better.”

The government continues to entice investors in more than 40 major PPP deals worth about $18.1 billion and the robust pipeline of deals should sustain the program beyond Aquino’s term.

In his final SONA, Aquino said the government received a premium of P64.1 billion ($1.41 billion), which all goes to the national coffers, he said, to the audience’s applause. – Rappler.com