The Philippines is set to hold air talks with the UAE at the end of August and possibly increase flights between both countries.

PAL said in a statement on Wednesday, August 19, that many government-subsidized UAE airlines have been lobbying for more flights into the Philippines to carry passengers to destinations beyond the country, to the detriment of Philippine-based carriers.

“We call on the Philippine panel to the PHL-UAE air talks to refrain from giving Middle East carriers undue advantage by granting more capacity and frequency beyond what the market requires,” PAL President Jaime Bautista said in the statement. (READ: Clipping PAL’s ‘too many wings’)

Citing an interview with Manila Times in June, PAL said a Cebu Pacific senior executive expressed concerns over the Philippines’ plans to enter a fresh round of air talks with the UAE, given Philippine entitlements have yet to be fully utilized by local airlines.

“Cebu Pacific believes that a new round of air talks with the UAE should not be held until all available Manila-use entitlements are fully utilized by Philippine carriers who are ready, willing, and capable of operating routes to UAE, including Cebu Pacific,” PAL said as it quoted JR Mantaring, officer-in-charge of Cebu Pacific corporate affairs.

According to PAL and Cebu Pacific Air, there are over 700,000 Filipinos working in the UAE.

PAL said it echoes the sentiment of the US airline industry against tactics of Middle East airlines that are being investigated for “unfair competition.”

The flag carrier said it hopes the Philippine government will safeguard the interests of Filipino air travelers against the negative implications of “additional yet unwanted flights from the Middle East, especially with next week’s air talks between the Philippines and the UAE.”

According to PAL, the US government is looking into allegations of unfair practices of carriers from the UAE and Qatar that are subsidized by their governments by as much as $42 billion.

PAL said United, Delta, and American Airlines formed a coalition calling on Washington to enforce the open skies agreement, which, they said, is weighted in favor of Gulf carriers.

It asked the US government to put a temporary block on new US-bound services by Etihad Airways, Emirates, and Qatar Airways, PAL said. 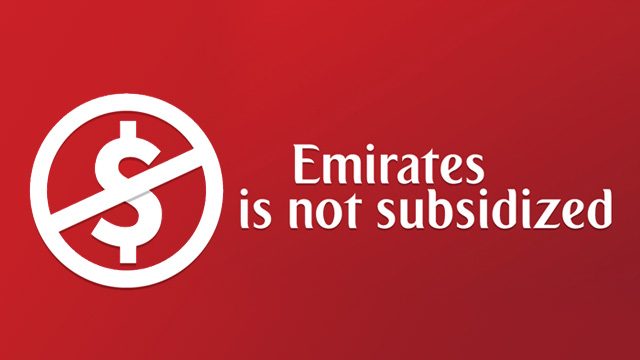 PAL’s Bautista said the Philippine air panel should learn from the bitter experience of major US airlines in dealing with their counterparts from the Arabian Gulf, including Emirates and Etihad.

“We hope our own government will promote fair competition and support our airlines who have invested much in re-establishing air links to the Middle East and Europe,” Bautista said.

But according to Emirates, allegations of subsidy and unfair competition leveled by the major US legacy carriers – Delta, United and American Airlines – are completely false.

“The allegations of subsidy and unfair competition is completely false and we have recently released a point-by-point, fact-based response that systematically disproves these allegations,” the UAE-based airline said in a statement.

In December 2014, PAL and Cebu Pacific scored victory after the government penalized Emirates Airlines from using flight frequencies beyond its allocation for the Manila-Dubai route.

The Civil Aeronautics Board has fined Emirates P1.8 million ($38,838.21), and has ordered the airline to stop selling tickets for a third daily flight for schedules beyond December 26, 2014. – Rappler.com