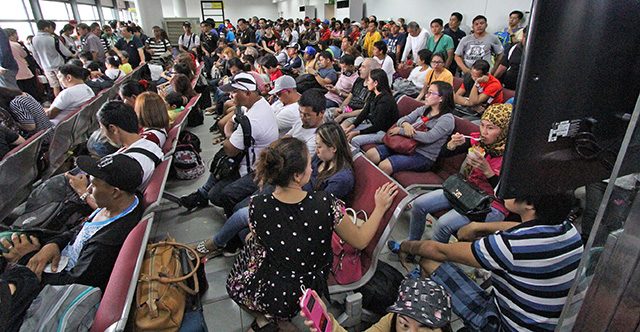 MANILA, Philippines (3rd UPDATE) – Budget airline Cebu Pacific has cancelled flights Friday, October 2, and advised its passengers for consequential flight delays and cancellations as it sorts the glitch over its upgrade to a new operations system.

In a statement, Cebu Pacific said that it upgraded to a new operations system on October 1, which encountered issues that prevented it from dispatching flights on time.

“We are working on normalizing our operations as soon as possible. For today (Friday), however, we expect consequential flight delays and cancellations, and perhaps even tomorrow (Saturday, October 3),” the statement read.

The Manila International Airport Authority has also suspended its daily early-morning (1:30 am to 3:30 am) closure of the MIAA runways in order to allow Cebu Pacific to operate its flights.

“MIAA’s decision gave Cebu Pacific extra two hours to fly passengers whose flights have been delayed and could have been cancelled had the daily runway closure not been lifted,” the airline said.

As of 5:15 pm Friday, the following Cebu Pacific flights scheduled October 2, 2015, have been cancelled:

As of 9 am Saturday, the airline cancelled one round trip flight 5J 813/814 Manila – Singapore – Manila.

“We sincerely hope for our passengers’ understanding as we expect some flight delays throughout the day. We continue to monitor the situation and we will provide updates as they are available,” Cebu Pacific said in a statement.

The airline said it will issue updates as they become available to keep the public and passengers informed.

The budget carrier said it is arranging the re-accommodation of affected passengers on the soonest available flights. Those who are unable to take these flights may, without penalties, rebook their flights for travel within 30 days from the original departure date or opt for full refund.

Passengers traveling between October 1-8, 2015, may refund or rebook their flights for travel within 30 days without fees. They may contact the Cebu Pacific call center +(63 2) 702-0888 for their re-accommodation.

“We sincerely apologize for the inconvenience. We will provide for the requirements of the affected passengers, including meals, refreshment, and accommodation on other airlines,” the airline said.

In January this year, the Civil Aeronautics Board (CAB) imposed a record P52.1 million ($1.11) million) fine on Cebu Pacific over flight delays arising from cancelled flights during the Christmas holidays which affected 10,400 passengers from December 24 to 26, 2014.

The amount was directly deposited to the national treasury as mandated by Republic Act 776 otherwise known as the Civil Aeronautics Act of the Philippines.

CAB advised passengers to seek compensation from Cebu Pacific for flight delays and cancellations during the holidays, as it has no power to compel the budget airline to shell out money for affected customers.