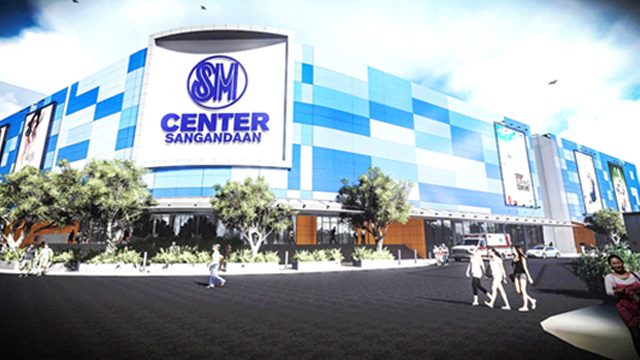 Facebook Twitter Copy URL
Copied
It is SM's 55th mall in the Philippines, and targets to close 2015 with 56 in the country and 6 malls in China

Named  SM Center Sangandaan, it is the company’s 55th mall in the country. Located along the city’s busy intersection of Samson Road and A. Mabini Street, Sangandaan, the mall has an additional 38,622 square meters (sq m) in gross floor area (GFA), giving SM Prime a total retail space of 6,825,206 sq m, “the largest footprint in the country.”

SM Center Sangandaan is seen to give SM Prime access to the northern tip of Metro Manila, “bringing a unique shopping experience closer to the highly dense cities of Malabon, Navotas, and Caloocan.”

“SM Center Sangandaan reflects SM Prime’s commitment to be part of the growth across communities. We are very pleased to open our first mall in Caloocan City which is a testament to the fact that Metro Manila is far from being saturated by modern retail facilities,” SM Prime President Hans T. Sy said. (READ: SM allots P80 billion for mall expansion)

The newest mall is set to cater to more than 1.5 million Filipinos with 90% of the space lease awarded to various tenants. It will have anchor tenants such as SM Supermarket, SM Appliance Center, SM Cinema, Ace Hardware, BDO, and Watsons.

The 3-level mall will have 4 movie theaters with a total seating capacity of 824. It will also have 493 parking slots.

The mall’s facade gets its inspiration from different shades of blue, gray, and white, giving the exterior a quirky geometric visual design.

The main interior features a high glass ceiling and white walls which maximizes daylight and adds futher dimension to the mall.

“SM Center Sangandaan was delicately planned around a simple yet efficient design that allows shoppers to easily stroll around and provides clear line-of-sight to all shops on all levels at the same time,” the statement released Friday said.

To date, SM Center Sangandaan is the fifth SM mall to open this year, after Cherry SM in Shaw Boulevard opened on October 13 and SM City Cabanatuan on October 9.

Meanwhile, Robinsons Land Corp., the property unit of the Gokongwei group, plans to open 10 new malls between 2016 to 2017.

The new Robinsons malls will be located in Tagum, Davao; Jaro, Iloilo; Iligan City, Cebu; and General Trias, Cavite, while malls in Ilocos Norte and Tacloban City will be expanded.

Also, 5 new malls are scheduled to be opened in 2017 which are located in Ormoc; Tuguegarao; Naga City; Valencia, Bukidnon; and Cabancalan, Negros Oriental. Over the near-term period, Alano said Robinsons Land plans to open 3 to 5 malls annually.

Robinsons Land is currently the second largest mall operator in the country with 39 malls with total gross leasable area of 1.08 million sq m.

Manuel “Manny” B. Villar, meanwhile, is raring to pit his Starmall against the Goliaths SM and Robinsons malls.

“We’re very aggresive now. We still see a lot of demand for malls,” he said.

Villar said Starmall is expecting to complete 5 malls toward the yearend, and eyeing to add 3 to 4 malls every year.

“Every year we can expect a much higher growth rate for our leasing operations,” he said. (READ: Anticipating huge demand, Manny Villar to build more malls) – Rappler.com