MANILA, Philippines – The Bangko Sentral ng Pilipinas (BSP) said on Thursday, October 29, that the proposed new generation coins would feature the electromagnetic signature (EMS) to guard against tampering and counterfeiting.

“We are also concerned about the so-called integrity of our coins. We must guard against possible tampering and issuance of counterfeit coins so we are introducing the EMS that will allow the vending machines to reject counterfeits,” BSP Deputy Governor Diwa Guinigundo said.

He added that the central bank’s numismatic committee has completed its study on the various security features, design, and dimensions of the new generation coins.

“We will be finalizing all our recommendations for the approval by the Monetary Board. As provided by the BSP Charter, we will also be going to the Palace for the presidential approval of the proposed design, security features, dimensions of the new generation coins,” he said.

Guinigundo also revealed there would be rationalization in the denominations of the new generation coins.

“There will be rationalization in terms of number. Some denominations will have to go because they have outlived their usefulness as far as the general public is concerned,” he said.

The existing one-centavo, 5-centavo, 10-centavo, 25-centavo, P1, and P5 coins have been in circulation since 1995, while the P10 bearing the profiles of Andres Bonifacio and Apolinario Mabini in a conjoint manner on the obverse side was issued in 2001.

The coins’ dimensions would also be altered due to the high demand for high-denominated coins such as P1, P5, and P10, he added.

But BSP could not stop the minting of one-centavo coins since it is mandated by the law.

The BSP is also on track with the schedule of the demonetization of the New Denomination Series (NDS) banknotes launched in 1985.

The old or NDS banknotes could only be used for daily transactions until December this year, he said. (READ: BSP: ‘Old’ PH peso bills valid until Dec 31) 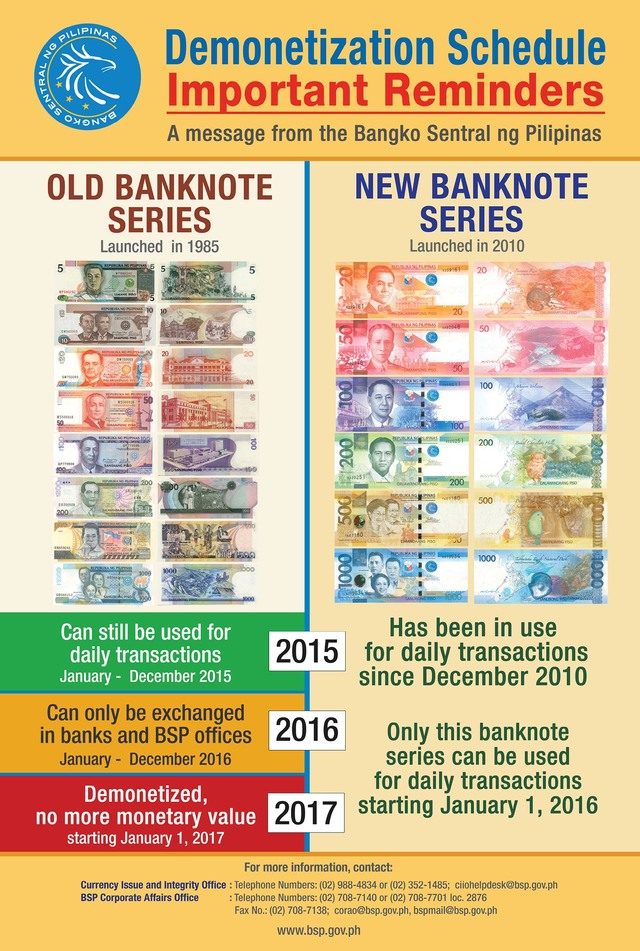 Starting January 2016, only the NGC bills would be the currency in circulation.

But the NDS banknotes could still be exchanged in banks and BSP offices until December next year before being demonetized in January 2017.

Thus, Guinigundo urged the public to carefully inspect the banknotes, particularly the P100 and P1,000 bills used in their transactions, as the new colored P100 bill would only be available in January. (READ: BSP to change P100 bill color in 2016)

The new colored P100 bill would have a different shade or mauve from bluish gray to differentiate it easily from the P1,000 bill.

“People are careless about spending their money,” he said and cited the case of the US dollar that bears only one color for all the denominations, “that is why it is called the greenback.” – Rappler.com