Nov 3, 2015 7:07 PM PHT
Chrisee Dela Paz
Facebook Twitter Copy URL
Copied
'We will be ready for them (Telstra-San Miguel partnership). It will be a problem for all networks,' PLDT's Manuel Pangilinan says 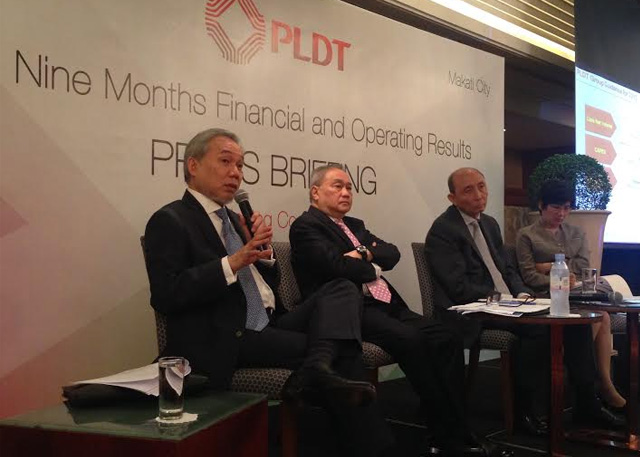 “We’ll be ready for them. We need to be ready. It will be a problem for all networks,” PLDT Chairman Manuel V. Pangilinan told reporters during his telco’s announcement of third quarter financial results on Tuesday, November 3, in Makati City.

With the Telstra and San Miguel tie-up poised to challenge the duopoly of PLDT and Globe Telecom, Incorporated in 2016, Pangilinan said it will be a “threat” to expanding its market share for postpaid and prepaid.

“We need to protect our market share for prepaid and postpaid. We’ll feel it immediately but it depends on what their tactics (are). It’s hard to speculate. But really, they wouldn’t come in without a fanfare. The novelty of a new player…some people will be lured to try,” Pangilinan said.

In an earlier filing with the Australian Securities Exchange, Telstra said it would invest about $1 billion in the Philippines through a joint venture with San Miguel.

According to San Miguel President and COO Ramon S. Ang, the joint venture will offer voice, text, and Internet services with focus on mobile-broadband services.

Ang told some of the world’s business tycoons at the Forbes Global CEO Conference in October that his company will launch a third major telecommunications player in the country by 2016. (READ: Ramon Ang: We hope to open 3rd major telco by 2016)

PLDT – the second most valuable listed company in the Philippines – saw its net income decline by 16.75% to P6.61 billion ($141.07 million) in the third quarter of the year from P7.94 billion ($169.45 million) in the same period last year. This is mainly due to higher cash operating expanses and lower service revenues from the wireless business.

“The third quarter is seasonally ‘soft’ yet our revenues have shown a general improvement, both quarter-on-quarter and year-on-year,” Pangilinan said.

For its consolidated service revenue, the PLDT said it inched up by 2% year-on-year, to P107 billion ($2.28 billion) by end-September 2015, excluding earnings from the international and national long distance segments.

“Revenues are up by 4% for the wireless and 9% for the fixed line, if you take out ILD (international long distance) revenues,” Pangilinan told reporters.

“What’s masked in the growth of the new businesses is really the gaps that are made by the decline in ILD, and that decline will continue for the next two to 3 years at the rate of around P4 billion ($85.34 million) a year,” he added.

For the PLDT chief, there remains much to be done.

“We recognize our toll business to continue to be a drag even if we push our data businesses. We’ll need to compete by providing consumer reliable quality,” PLDT President and CEO Napoleon L. Nazareno said during the media briefing.

“Given the elevated capex (capital expenditures), we need to manage our cash prudently knowing that ROI (return on investments) may take time,” Nazareno added.

“Our capex spend for the last 6 years, including 2015, will therefore sum up to about $4.6 billion. That is no small change. We believe these expenditures are vital in order to provide the level of service required by the market and for PLDT to be robustly competitive for the future,” Pangilinan added.