Facebook Twitter Copy URL
Copied
There are 1,212 cases of intercepted ammunition at NAIA terminals so far this year

MANILA, Philippines – Transportation Secretary Joseph Emilio Abaya asked his former colleagues in Congress to review the law on penalizing illegal possession of firearms or ammunition, in a bid to protect passengers from the laglag-bala or bullet-planting scam at the Ninoy Aquino International Airport (NAIA) and other local airports.

Republic Act (RA) 10591 or the Comprehensive Firearms and Ammunition Regulation Act imposes penalties such as imprisonment of at least 30 years for illegal possession of firearms. It requires holders of unregistered guns and firearms with expired licenses to register and renew through a final general amnesty.

“I do. I encourage my former colleagues in Congress to take a look at the law again,” Abaya said in a press briefing in Pasay City on Wednesday, November 4. Abaya served as Representative for the first district of Cavite for two terms from 2004 to 2010.

Senate Bill No. 3000 or the Iwas Tanim-Bala bill comes after several cases in the past few weeks involving the “discovery” of one or 2 bullets in the luggage of unsuspecting passengers at the NAIA and other local airports.

“Bam and Leni Robredo already filed a bill to allow 3 bullets or less to decriminalize. I leave the wisdom to the Congress and Senate. We are mere implementors here. We merely follow the law,” Abaya said.

Other than encouraging the Congress to review RA 10591, Abaya said the government is studying the structure of the aviation security, setting up additional closed circuit televisions (CCTV), changing handling procedures, and heightening the investigation on the alleged scam.

While the press briefing was ongoing, a Cagayan de Oro-bound passenger was apprehended inside NAIA Terminal 3 after a live bullet was found in his baggage. The passenger said he forgot to remove the ammunition from his bag, saying it was a “gift from a friend.”

On Friday, October 30, a Manila-bound passenger was arrested inside the Francisco Bangoy International Airport in Davao after 2 live bullets were found in his baggage.

Several similar cases were reported in NAIA terminals over the past few weeks. (TIMELINE: Recent cases of alleged bullet scam at NAIA)

Since 2012, the Office for Transportation Security (OTS) said it has recorded 6,605 incidents wherein passengers were caught with ammunition in their luggage. 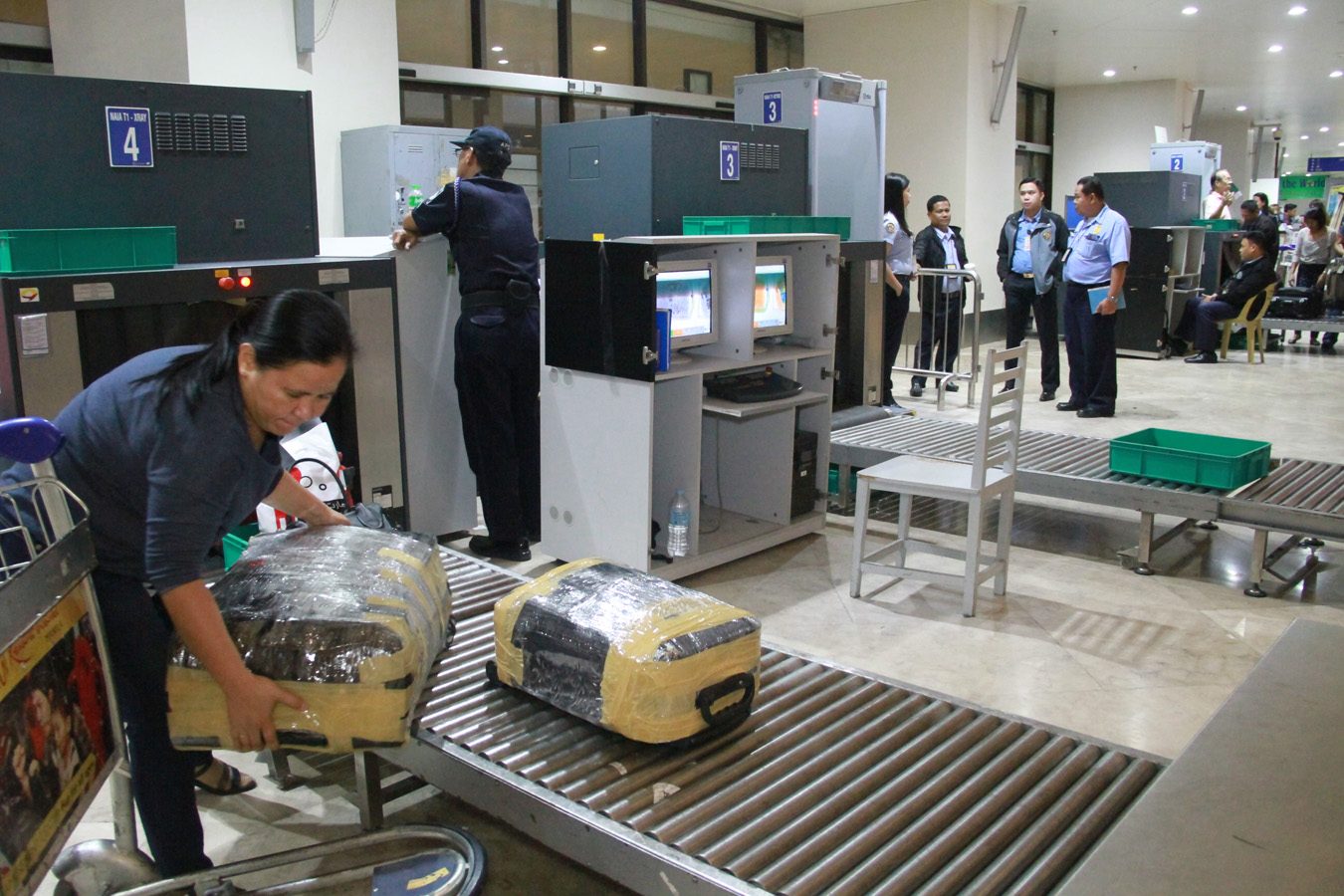 The Manila’s airport security reported that there are 1,212 cases of intercepted ammunition at NAIA terminals so far this year. But there is still no evidence to prove the presence of a syndicate behind the supposed laglag-bala scam.

Although he did not directly answer the number of possible laglag-bala cases his office is investigating, Abaya said: “Of all those reported by the media, there are only 3 cases wherein passengers denied the ammo caught in their luggage.”

The DOTC chief instead said, “the numbers don’t spell it. A single case merits government attention. Wrongly charged is unjust. It’s not something the government should ignore.”

“As of now, we can’t necessarily deduce that these 3  cases are of laglag-bala. There is no proof yet,” Abaya said. No impact on tourist arrivals

Meanwhile, Abaya said the number of tourists coming in and out of the country will not be affected, citing a recent interview with Tourism Secretary Ramon Jimenez.

This concern was raised after the alleged scam was picked up by international news outlets Time and the British Broadcasting Corporation, causing paranoia among tourists.

“Secretary Mon Jimenez was quoted in an article that tourism is not affected by the laglag-bala or tanim-bala issue. But it could be a cause of concern,” Abaya said, without further explaining.

The transportation chief added that his agency, along with other concerned departments, such as the Philippine National Police and the Department of the Interior and Local Government, is exhausting all means to resolve the problem immediately.

Abaya said anyone proven guilty of participating in the scheme will face imprisonment of up to 40 years.

OTS Administrator Roland S. Recomono said in the same briefing that there are “90 ongoing investigations” on its personnel “for various offenses.”

The investigation will take up to one month, according to Abaya.

“We are looking into the matter whether there are illegal activities worth intercepting,” Recomono said. “We are not insensitive of that [laglag-bala scam], we just really need a thorough investigation.” – with reports from Katerina Francisco/Rappler.com