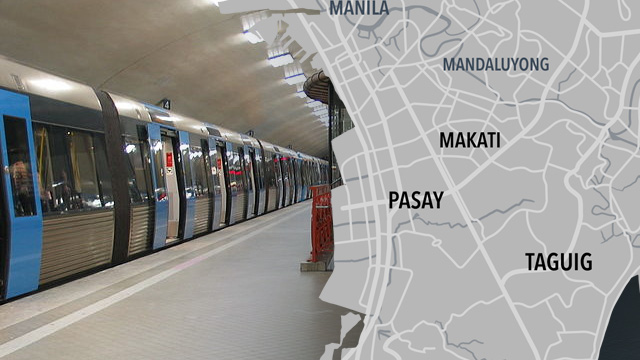 MANILA, Philippines – The auction of the country’s P374.5-billion ($8.01-billion) proposed project to build a subway that will connect the cities of Makati, Pasay, and Taguig is now eyed for post-Aquino’s term.

“Clearly, I don’t see that [the project will be approved by the] NEDA (National Economic and Development Authority) Board this term. It will be up for auction next administration,” Transportation Secretary Joseph Emilio Abaya said on the sidelines of a media briefing in Pasay City on Wednesday, November 4.

The Makati-Pasay-Taguig Mass Transit System Loop was one of the 7 infrastructure projects approved by the NEDA Investment Coordination Committee Technical Board and Cabinet Committee meeting on January 14.

The planned 20-kilometer (km) system will consist of a 16-km tunnel, a 4-km elevated railway, and 11 stations. This is expected to ease road congestion in the cities of Makati, Pasay, and Taguig, according to the Public-Private Partnership (PPP) Center website.

The Transportation department initially targeted to auction off the PPP subway deal in the first half of the year; but according to Abaya, it will still need the full feasibility study (FS) from the Japan International Cooperation Agency (JICA).

“It has been communicated to JICA that they may proceed with the FS, which will take 18 months to do from the approval. It’s a huge project,” Abaya said.

The transportation department said it is allocating at least 7 months after the roll out of the project for the one-on-one meetings with prospective bidders and actual bidding itself.

“JICA would know what they’re doing. We just have to continuously engage them so that 18-month period will be shortened,” Abaya said.