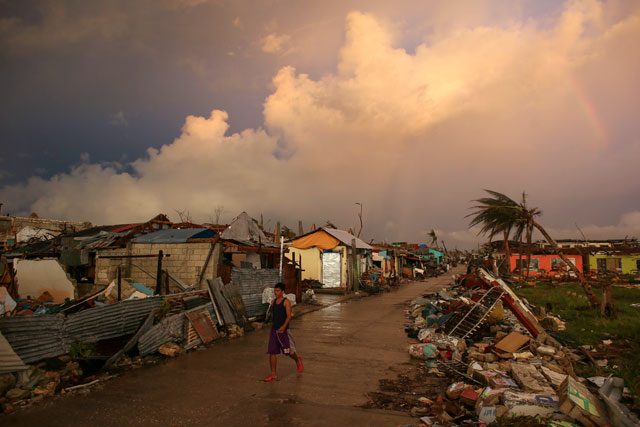 MANILA, Philippines  – Two years after Super Typhoon Yolanda (international name: Haiyan) hit central Philippines, government said it is halfway through its plans on repairing what the typhoon damaged and aiding its victims.

“Overall, about 51% of all the projects we have set out to do have been completed and are ongoing. The others are still in various stages of procurement. By the end of 2016, we should be reaching most of what has been planned,” National Economic and Development Authority (NEDA) Director General Arsenio Balisacan said at a joint briefing on Thursday, November 5.

Balisacan added that providing the full range of resettlement housing and large infrastructure projects such as municipal buildings should be completed by 2017.

This is the government side, he said. “You still have a large recovery coming from the private sector, where the bulk of the continual recovery and help will come from.” “We are now transitioning into the medium-term phase of recovery,” Balisacan said. He added that full reconstruction and rehabilitation efforts had an original timeline lasting until 2017.

Department of Public Works and Highways (DPWH) Undersecretary Raul Asis said that 86% of the rehabilitation of road damage has been accomplished. It entailed about 60 kilometers out of the target of 106 km of national roads and the majority of national bridges repaired.

The agency has also completed 77 out of 110 projects or 88% of its target, with 17 ongoing under the 2015 budget and 9 projects under procurement.

Abad also emphasized that Yolanda was the strongest typhoon to ever hit Earth and therefore there is no standard to measure the speed of government response. He noted that it took the United States 10 years to recover from Hurricane Katrina.

“The two most affected aspects of community life, housing and livelihood, are in fact being addressed with a definite timeframe such as the permanent housing program, which we hope to be able to complete by 2017,” he said. (READ: COA hits Tacloban over delayed Yolanda rehab)

He continued, “The most difficult project to implement is the housing program, and you can see the development and the changes the National Housing Authority (NHA) faced in implementing permanent settlements.”

More than a million houses were affected by Typhoon Yolanda but the NHA and the Housing and Urban Development Coordinating Council (HUDCC) is only in charge of providing permanent settlement for families that are living in unsafe areas.

The other affected houses were taken care of by Department of Social Welfare and Development (DSWD).

DSWD Assistant Secretary Vilma Cabrera said that, as of October 14, 2015, 1,576 families or 7,302 individuals were still living in transitional shelters as they wait for permanent housing. Of the P93.7 billion of funds released for recovery, the NHA was given about P26.966 billion ($574.80 million)  to produce 92,554 houses of the 205,128 requirement based on the comprehensive rehabilitation recovery plan signed by President Benigno Aquino III.

Of this initial batch of 92,554 houses, HUDCC chief Chito Cruz said that, so far, 929 units have been turned over to residents of Tanauan and Tacloban in Leyte. (READ: Less than 10% of target homes built for displaced Tacloban families)

This is to cover the projects that have already been funded, he said. He attributed the delays in setting up housing to difficulties finding suitable land, legal problems with land titles, and obtaining clearances from other government agencies.

To complete the rest of the 205,128 requirement, the agency hopes to get about P7 billion ($149 million)  from the dividends of Government Owned and Controlled firms (GOCCs) that will cover an additional 25,000 houses.

“If the budget is approved by 2016, we can start implementing this project and the whole process of construction normally take about a year to a year and half. So we can expect all of this to be completed if funding will be approved,” he said.

Balisacan also noted that lessons have been learned throughout the process and that the National Disaster Risk Reduction Management system is up for review this year.

Congress is already deliberating on it, he added.

“We hope to have that passed. That review will take into account the lessons we have learned and policies we need to change especially in the areas of coordination. That should speed up our capacity to respond to disasters,” he said. – Rappler.com