Nov 23, 2015 5:50 PM PHT
Rappler.com
Facebook Twitter Copy URL
Copied
One or two more acquisitions could be similar to or bigger than Smashburger, its biggest deal yet at nearly $99M 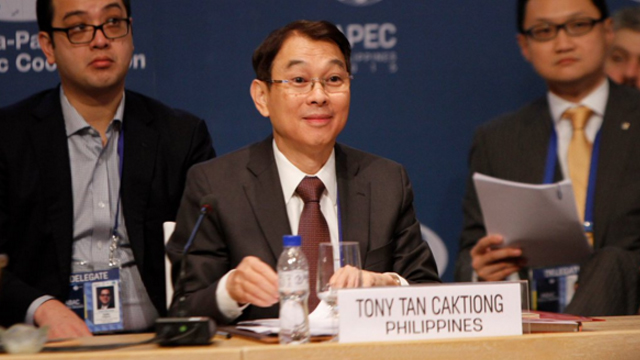 MANILA, Philippines – Jollibee Foods Corporation (JFC) is eyeing one or two more acquisitions to meet its target of becoming one of the top 5 quick service restaurants globally in terms of market capitalization. (READ: Jollibee plans to buy US brand)

In an interview on the sidelines of the group’s special stockholders’ meeting on Monday, November 23, Jollibee chairman Tony Tan Caktiong said the acquisitions could be similar or bigger than the Smashburger deal.

In October this year, JFC completed its acquisition of a 40% stake in the US-based burger chain for $99 million.

Apart from acquiring bigger brands, Tan Caktiong said, “a startup can be the winning brand in the future.”

In order to meet its goal of becoming among the top 5 food chains worldwide, Jollibee chief finance officer Ysmael Baysa said the group will also need to accelerate its net income and system-wide sales growth.

Jollibee recorded a compounded annual growth rate of 16% in terms of net income and 15% for system-wide sales.

“If we want to be number 5,  we have to make more acquisitions, and we also [have] to increase our growth rate,” Baysa said.

He added that there is a good chance for Jollibee to improve its current ranking and become the top 7 fastfood chain worldwide by 2020, if the company is able to perform well.

The group earlier said it will spend P10.4 billion ($220.28 billion) in capital expenditures for 2016, primarily to roll out more stores both here and abroad.

Of the programmed spending for next year, at least P7.5 billion ($158.85 million) will be set aside for new store investments and current store renovations.

The rest will mostly be for the commissary expansion.

The group is expanding globally by bringing its flagship brand, Jollibee, in 5 new markets next year – United Kingdom, Italy, Canada, Malaysia, and Oman.

It also plans to open Jollibee stores in more new markets in 2017: Australia and Japan.