After another mine spill, Philex eyes replacing Benguet facility 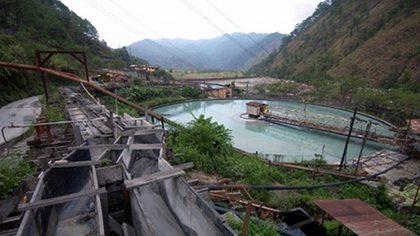 MANILA, Philippines – After wastes at its Padcal mine in Benguet province leaked from the tailings pond facility for the second time in August, the country’s largest gold producer Philex Mining Corp. is considering options, including replacing its only active tailings pond.

Philex Senior Vice President for Corporate Affairs Mike Toledo told Rappler in a phone interview on Sunday, September 2, that the mining firm has secured the services of a team of experts to evaluate the integrity of the tailings pond in Itogon, Benguet.

Toledo said that if the expert team will recommend that the pond be decomissioned, Philex will close it and invest in a new one. He added that the areas where a new tailings pond can be built have also been identified.

“We are continuing with our remediation efforts. We have gotten international consultants from Australia to make sure we will resolve the issue,” Toledo said.

The recent incidents at Padcal occured at a time the Philippine government is drafting rules and regulations on Executive Order 79, which sets the Aquino government’s policy on the mining industry. Anti-mining groups have claimed that mining is inherently destructive to the environment, and have questioned claims of industry players that mining can be responsibly pursued.

A team from the Mines and Geosciences Bureau (MGB) is currently in Benguet determining the size of the damage, according to MGB Director Leo Jasareno.

In a phone interview with Rappler, Jasareno said that based on the Mining Act, Philex will be made to pay a fine of P50 per ton of mine tailings. The volume of the mine tailings are still being determined.

Jasareno said the amount of fines that will be charged to Philex may be finalized by next week.

He added that apart from the MGB’s fines, other fines will be imposed to Philex. These include those related to the Clean Water Act and the violation of it’s Environmental Compliance Certificate.

Toledo said the mine tailings leak occured on Thursday, August 30, at 2:40 a.m. but was immediately contained. He said the leak was caused by bad weather conditions in Philex’ mine site.

This is the second time in August that a mine tailings leak occured in the Padcal mine. The first time was in August 1 for which the MGB has initially imposed a P325 million fine on Philex for discharging up to 6.5 tons of sedimentation into the Balog River.

The dam is situated at about 30 kilometers downstream of Agno River from its convergence with Balog River. The drain tunnels of Philex discharge their water load into the Balog River, which, in turn, runs for about 2.5km to converge with Agno River.

Philex has 3 tailings pond but only tailings pond no. 3 is actively used. The two other ponds have been decommissioned and rehabilitated as forest areas.

The Padcal mine, which has been operating nonstop since the 1950s, is expected to last only until December 2020.

Philex has been scouting for new mines to sustain profitability ahead of the end of Padcal’s mine life.

Philex has an ongoing $1-billion investment in its Silangan project in northern Mindanao. The company wants to put the mine on stream by 2016.

Philex is waiting for a permit from the government to pursue further activities at one of the two mining areas in Silangan. However, the EO-79, which one imposed a moratorium on all new contracts, put Philex’s Silangan project at a standstill. – Rappler.com