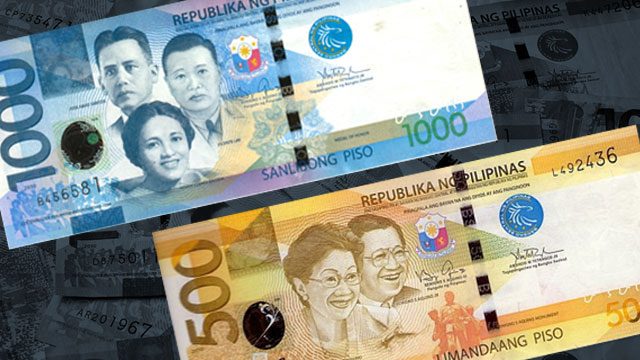 In an advisory issued December 22, the BSP cited its earlier warning against the unlawful practice of extracting the Windowed Security Thread (WST) from genuine banknotes. WST consists of a thin ribbon that is threaded through the note’s paper. Counterfeiters then paste the extracted, genuine WST on the counterfeit P500 and P1,000 bills.

But in recent months, the BSP observed that in order to camouflage or to cover the missing WST on genuine P100 banknotes, counterfeiters use a pen with semi-gloss ink or cover the area where the WST was removed with commercially available glossy/metallic paper.

“In view of this, the public is advised to be extra vigilant to this new trick/modus operandi of counterfeiters,” BSP said.

Genuine banknotes with WST willfully removed will no longer have any value, while banknotes devoid of WST but subsequently simulated or pasted with genuine WST is considered counterfeit.

The BSP has repeatedly advised the public to check banknotes carefully. Among the security features of the genuine New Generation Currency (NGC) bills are:

In case the public get hold of fake banknotes, they are advised to surrender them to the Currency Issue and Integrity Office through the Cash Department, BSP, Security Plant Complex, East Avenue, Diliman, Quezon City or to the nearest BSP regional office or branch.

But BSP had already started consultations with stakeholders on the proposed new generation coins that would feature the electromagnetic signature (EMS) to guard against tampering and counterfeiting activities. (READ: Proposed PH coins to be more counterfeit-resistant – BSP)

The central bank also announced in October this year that by January 2016, the P100 banknotes will come in a different color to easily distinguish it from the similarly colored P1,000 banknotes. (READ: BSP to change P100 bill color in 2016)

The new P100 bill would have a different shade of blue, in response to complaints saying that it is difficult to differentiate the P100 and P1,000 banknotes. Both bills, which are part of the NGC banknotes released in 2010, look similar in terms of color. (READ: Confused over P100 and P1,000 bills?) – Rappler.com