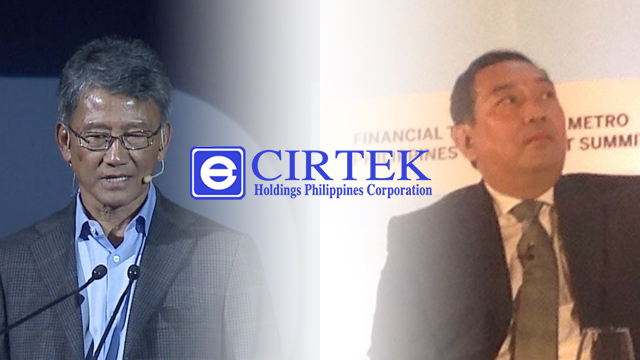 MANILA, Philippines — Cirtek Holdings Philippines Corporation on Monday, January 4, announced that it hired investment banker Roberto Juanchito Dispo as president and vice chairman and Filipino entrepreneur and Silicon Valley pioneer Diosdado Banatao as adviser to the board, as the listed technology firm gears up for acquisitions locally and overseas.

Cirtek told the Philippine Stock Exchange (PSE) that the appointment of Dispo and Banatao took effect on January 4, 2016.

“As Cirtek moves from strength to strength and scales up its business activities, technology capabilities and geographic presence, Dado Banatao’s expertise and industry foresight will be invaluable to the company’s future,” Cirtek Chairman Jerry Liu said in the PSE disclosure.

He was also part of SiRF Technology Holdings, Incorporated, where it started the consumerization of global positioning system (GPS) after it has been declassified by the US Government.

Banatao is the founder and managing partner of Tallwood Venture Capital.

Dispo, the former president of First Metro Investments Corporation, is a seasoned investment banker with over 17 years of experience in capital raising, investments, strategic acquisition and asset management.

He is credited for creating successful financial products such as overseas Filipino workers (OFWs) bonds and the country’s first exchange-traded fund (ETF).

He also worked for the  government with stints at the Department of National Defense, Department of Trade and Industry, and Department of Finance. His last government post was Deputy Treasurer of the Philippines with the rank of Assistant Secretary.

Dispo was credited for key debt and capital markets reforms, such as issuance of long-term treasury bonds, bonds re-issuance and operationalization of the electronic treasury system.

The tech firm said it will use the proceeds from the share sale to fund strategic acquisitions, capital expenditures, pay financial obligations and for working capital requirements.