PLDT expects lowest core net income in over a decade 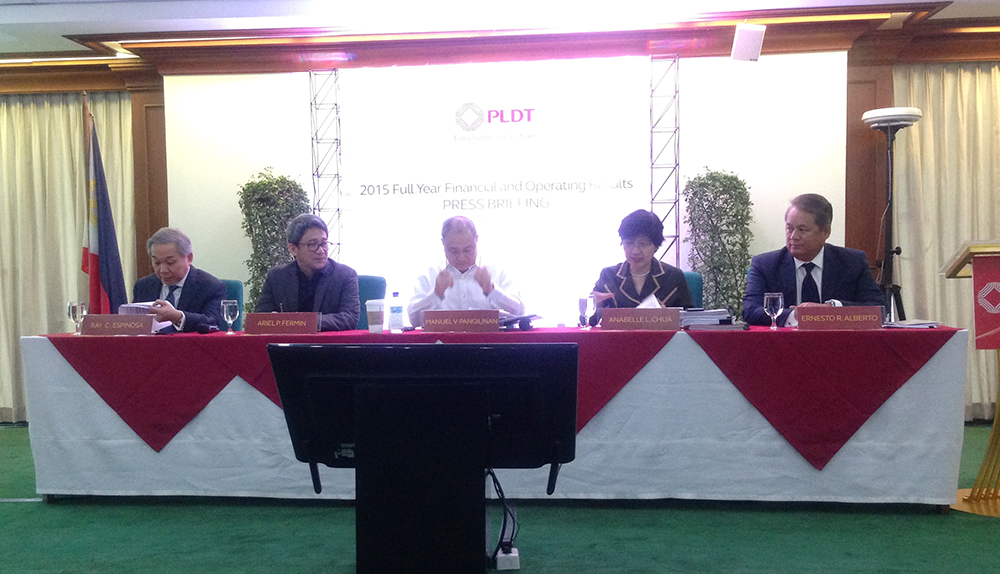 MANILA, Philippines – Philippine Long Distance Telephone Company (PLDT) expects a core net income of P28 billion ($590.01 million) in 2016, the lowest in more than a decade, as it takes a hit on increasing depreciation and financing expenses, intensifying competition, and declining market share for prepaid wireless.

“In that light, we do have to reset the profitablity and cash flow profiles of the group to a new baseline starting 2016. Guidance for core earnings has been reset significantly from P35 billion ($737.52 million) in 2015 to P28 billion ($590.01 million) in 2016,” PLDT chairman and CEO Manuel V Pangilinan said during the telco’s 2015 financial briefing in Pasig City on Monday, February 29.

For 2015, PLDT saw its core net income slide by 6% to P35.2 billion ($741.74 million) from the previous year’s P37.4 billion ($788.09 million), reflecting the impact of expenses relating to the manpower reduction program and higher financing costs, and offset by lower provisions for income tax.

With declining legacy businesses, such as voice and text messages, the PLDT chief said data will remain as the main engine of growth.

“Home side of the business is growing single-digit, Enterprise growing double-digit, while our postpaid business remains competitive in the market. The critical challenge or the epicenter of our issues revolves around the prepaid wireless business of Smart (Communications, Incorporated). Looking onto 2016, we have quite a number of changes,” Pangilinan said.

The whole organization of PLDT – structure and staff – has been oriented to turn on a digital pivot, its chief said.

“This will take time to bear fruition – perhaps 3 years of critical adjustments. Consequently, our revenue mix and EBITDA margins will change – more data revenues, lower margins on data services. As well, profitability levels for PLDT will need to be reset to a new baseline starting in 2016,” Pangilinan said.

He added that PLDT’s lower profit guidance of P28 billion ($590.01 million) is due to structural change in the industry, its efforts to maintain a fair share of market, the entry of a third player, and elevated capital spending budget of P43 billion ($906.10 million).

PLDT announced that it lost about 5 million subscribers in prepaid wireless business in 2015.

“Loss of subscribers to Globe and incremental ads they managed to gain accounted probably for the biggest hole in our service revenues in prepaid,” Pangilinan said. “[W]e need to regain all or a portion of that lost market share, so that will take a hit of pain on our part.”

With the Telstra and San Miguel Corporation tie-up poised to challenge the duopoly of PLDT and Globe Telecom, Incorporated in 2016, Pangilinan expects “competition to continue to be intense.”

In an earlier filing with the Australian Securities Exchange, Telstra said it would invest about $1 billion in the Philippines through a joint venture with San Miguel.

According to San Miguel president and COO Ramon S Ang, the joint venture will offer voice, text, and Internet services with focus on mobile-broadband services.

Ang told some of the world’s business tycoons at the Forbes Global CEO Conference last October that his company will launch a third major telecommunications player in the country by 2016. (READ: Ramon Ang: We hope to open 3rd major telco by 2016)

“In our working assumptions, we assume a third player will enter the market in the coming months. San Miguel’s public statement is either by themselves or with Telstra, we are taking it by face value,” Pangilinan added.

The PLDT chief said the telco also has to “forego 25% of core net income in the next two to 3 years because of high CAPEX (capital expenditures).”

Increased capital spending of about P43 billion ($906.10 million) is expected to continue in 2016, weighing on PLDT’s earnings.

“Of course that means higher depreciation and financing expenses, as part of the build-out of a robust, superior network to support the continued growth in data traffic,” Pangilinan said.

At the end of the briefing, PLDT announced that it will not declare a special dividend for 2015 earnings, mainly due to elevated CAPEX levels.

“All that said – I can say that we are off to a good start – with encouraging signs from sequential revenue trends and test results of network quality that are showing sustained improvements,” Pangilinan said.

“Yet much needs to be done and much can be achieved with hard work, perseverance, and focus. The digital world is vast, dynamic, and complex but we’ve done it before and we can do it again.” – Rappler.com