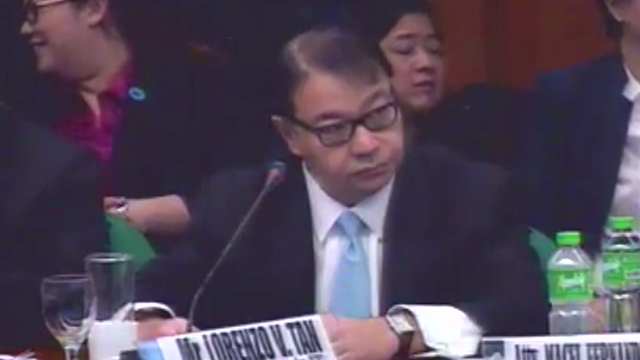 MANILA, Philippines – The branch manager of RCBC who’s under fire in the ongoing probe into a bank heist said that it was no less than CEO and president Lorenzo Tan who “invited” her to join the bank in 2013.

Maia Santos-Deguito, accused of illegally transferring $81 million of electronically stolen funds from Bangladesh Bank to private accounts using RCBC, said that she met Tan in one of the parties hosted by Kim Wong.

Wong is a controversial character linked to past scandals and is one of 6 traders being probed for laundering the stolen funds.

“I was invited to join RCBC (Rizal Commercial Banking Corporation) by Mr Lorenzo Tan in a very casual conversation,” Deguito said at the resumption of the Senate hearing on the case. This particular testimony was made after the Senate committee’s closed-door session with her.

The hearing on Thursday, March 17, yielded two names that link Deguito to Tan: Jason Go, a known trader of luxury cars, and Wong.

Tan admitted that Go is a “friend” and that he met Wong way back in 2002 in his restaurant.

Wong’s name first cropped up under the Estrada regime, when military intelligence tagged him as a drug lord. Under the Arroyo government, former intelligence chief Victor Corpus linked Wong to then Senator Panfilo Lacson.

Go, on the other hand, is a “valued” client of RCBC, according to bank officials themselves.

Raul Tan, RCBC treasurer, admitted Thursday that it was Go who recommended to the bank that they assign Deguito as manager of the Jupiter branch instead of the branch in Bonifacio Global City, which was supposed to be her assignment.

Deguito said she resigned from East West Bank in August 2013. Soon after, she said she was recruited by Tan.

She recalled that during the last quarter of 2014, she met Tan and Wong during a birthday party of Go.

Tan denied recruiting Deguito, saying a branch manager is “5 layers below me.”

“I don’t remember that [party.] I don’t think it happened,” Tan told the Senate. “I met Mr Wong twice in his restaurant.”

Tan added: “She’s portraying herself that she’s someone special that I brought her in. That didn’t happen.”

Deguito faces a money laundering complaint at the justice department because of allegations that she allowed the transfer of $81 million to fictitious accounts in the RCBC-Jupiter branch that she manages. The money was later released to casinos, which are not covered by the anti-money laundering law. (READ: $81-M bank heist money trail hits dead end in casinos)

Deguito allowed the transfer – despite a stop payment issued by the central bank and sent to RCBC, according to a testimony by one of her deputies, Romualdo Agarrado. (READ: RCBC manager: I’d rather release money than get myself killed’) – with reports from Chrisee de la Paz/Rappler.com